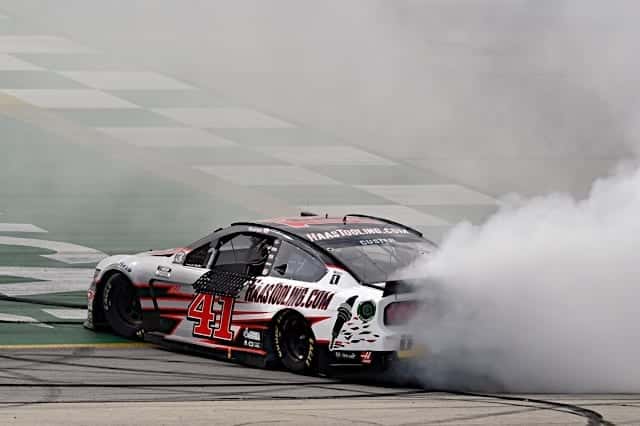 With one lap to go in the Quaker State 400 and a three-way race for the lead in front of him, an opportunity was in front of NASCAR Cup Series rookie Cole Custer at Kentucky Speedway.

Custer took it and turned it into his first career win in NASCAR’s top series, getting past Kevin Harvick, Martin Truex, Jr. and Ryan Blaney through a hole on the high side coming to the white flag.

With the win, Custer is now qualified for Wednesday night’s NASCAR All-Star Race as well as the Playoffs.

“Obviously, it wasn’t an easy track to pass on, so we were kind of stuck back there. This was the best car I have driven in my life,” Custer said. “This was by far just an unbelievable car and I can’t thank everybody enough.”

Harvick and Truex looked to be the two battling for the lead coming to the final restart. Truex pulled even with Harvick with seven to go, and Harvick had moved himself out front with a three-wide pass with 14 laps remaining. But a spin by Matt Kenseth, his second of the day, brought out the yellow to set up the wild dash for the finish.

That all changed as Harvick and Truex made contact on the ensuing restart, as well as Blaney getting loose after hitting a bump near the apron of the first turn at the white flag, creating contact with Harvick and the chance Custer needed. From there, the rookie took the lead and pulled away to win in the Bluegrass State.

Blaney: "We got to the bottom of 3-wide and I forgot there was a jump down there and I hit it…I can't believe the 4 didn't wreck when I hit him. We had the speed, just couldn't get the breaks to have track position."

"It's the nature of these races, it's all momentum."

Martin Truex Jr. says he didn't throw the race away and was in the wrong place at the wrong time on the final restart. Also noted he apologized to Kevin Harvick for a move that potentially costed him the win. #NASCAR pic.twitter.com/9YgAE9RSYE

Aric Almirola dominated early on. On a day in which he collected his second stage win of the season, Almirola led a race-high 128 laps. But after getting passed by Blaney on the race’s 138th lap, Almirola was never able to get back in front, seeing his string of five consecutive top-five finishes to an end in finishing eighth.

Sunday’s other stage winner was Brad Keselowski, who finished ninth after pacing the field for 34 laps. He was involved in a caution with 19 laps to go when he and Jimmie Johnson made contact, spinning the No. 48 car from running fourth on a restart. Johnson finished 18th.

#NASCAR: Brad Keselowski on radio after contact with Jimmie Johnson: