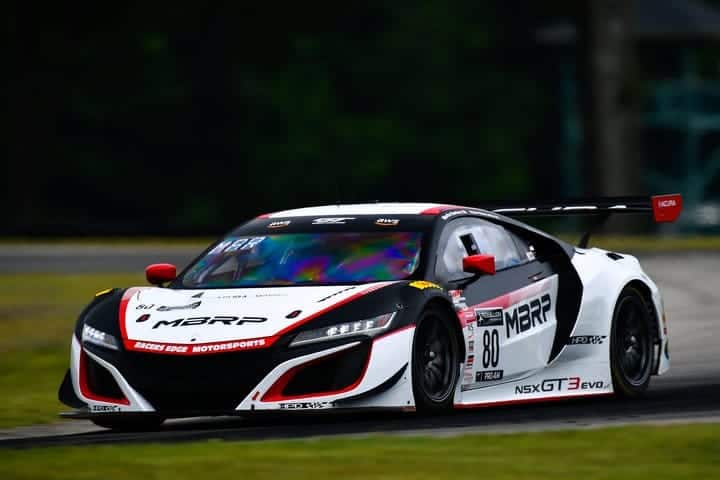 At VIRginia International Raceway this past weekend, Racers Edge Motorsports’ Acuras were the class of the field.  However, two separate issues with pit stops prevented them from sweeping the weekend.  They could only muster a split in the two GT World Challenge America powered by AWS rounds this past weekend with DXDT Racing that restarted the season.

Also of note, a very lean entry of only eight cars led SRO America to make the decision to run the two GT World Challenge America powered by AWS races in combination with the new GT Sports Club America.  The GT Sports Club America teams would only race for the first 40 minutes of each event.  Despite this move, a grand total of 12 cars would compete in each of the races.

Racers Edge Motorsports’ Shelby Blackstock won the pole for Race No. 1 Saturday morning and jumped out front when the green flag flew Saturday afteroon (July 11).  Within a couple of laps, he had nearly a three-second lead on the Mercedes of Winward Racing’s Kris Wilson.

Further back, TR3 Racing’s John Megrue was hit by the GT Sports Club America entry of GMG Racing’s Stu Frederick entering Turn 1.  The impact led to both cars spinning out.  They both continued, but Frederick pulled off on the long backstretch to draw the race’s first full course caution.

Once back under green, Blackstock continued to run away from the pack.  Meanwhile, Wilson was being pressured for second by Wright Motorsports’ Fred Poordad.  For the first couple of laps after the restart, Poordad kept this pressure up before dropping back.  Any chance for a good run ended 25 minutes into the race when a halfshaft broke on the No. 20 Porsche, resulting in Poordad spinning out in the Climbing Esses.

Poordad was able to nurse his Porsche 911 GT3 R back to the pits to allow the Wright Motorsports crew to take a look.  However, the suspension issues were enough to force the team to push the car behind the wall and out of the race.

The race was thrown upside down during the mid-race pit stops.  Blackstock dominated the entire first half of the race, but chose to wait too long before stopping.  Wilson, who was still running second at this point, stalled exiting Turn 5.  Officials, knowing that they were in the pit window, didn’t want to neutralize the event.  However, it took just a little bit too long for Wilson to get his Mercedes-AMG GT3 restarted.  By the time he managed to do it, the safety car had already been deployed.

While Blackstock hadn’t stopped yet, most of the other leaders already had.  This had two effects.   At the time of the caution, only three cars were still on the lead lap.  Blackstock’s stop for tires, fuel and a switch to Trent Hindman allowed three cars back onto the tail end of the lead lap.

Squadra Corse’s Rodrigo Baptista, who had already stopped prior to the caution, inherited the lead.  Hindman was third, behind teammate Kyle Marcelli.

It did not take long for Marcelli to take the overall lead from Baptista.  Less than a full lap as he made the move for the lead at the end of the backstretch.  Three laps later, Hindman took second away from Baptista.

Hindman appeared to be faster than Marcelli over the final 30 minutes of the race, but chose not to press the issue.  The two Racers Edge Motorsports pulled away to claim a one-two finish with Marcelli and Martin Barkey taking the overall win.

The margin of victory was a little less than two-thirds of a second over Blackstock and Hindman.  Baptista and Martin Fuentes were third in their Ferrari 488 GT3, 13 seconds back.  DXDT Racing’s David Askew and Ryan Dalziel managed to stay on the lead lap after the restart to finish fourth, while teammates George Kurtz and Colin Braun were a lap down in fifth.  In GT Sports Club America, 311RS Motorsport’s Ryan Gates led flag-to-flag to win by 30 seconds over GMG Racing’s Jason Bell.

In Sunday’s 90-minute race, Hindman started his No. 93 Acura from pole and almost immediately opened up a gap on the field.  Braun gave chase in the Crowdstrike-sponsored Mercedes for DXDT Racing.

Over the course of the weekend, Hindman and Braun had shown to be two of the fastest drivers out there.  As a result, the two were evenly matched.  Dalziel in the second DXDT Racing Mercedes was not too far behind Dalziel.

Once again, the pit window completely changed the race, but in a different way.  When Hindman made his mandatory pit stop, he ran up on the GT Sports Club America entry of Frederick.  This delayed his entry into his pit stall.  Then, Blackstock hesitated when leaving.  That, in and of itself, would have cost the No. 93 Acura team the lead.  Then came a speeding penalty, forcing Blackstock to serve a drive-through penalty just as he was catching Kurtz for the lead.

There is a minimum time you must spend in the pit lane in each race, determined by the length of the pit lane.  At VIR, that was 70 seconds.  The No. 04 team’s stop for Braun and Kurtz was nearly perfect at 70.084 seconds.  That allowed Kurtz to jump Blackstock and take the overall lead.

Things only got worse after Blackstock served his penalty as his Acura NSX GT3 briefly stalled.  After the electronics were recycled, he was able to resume in seventh, 40 seconds behind.  Additional electrical issues ended Blackstock and Hindman’s day early.

Overall, Kurtz ended up with a seven second lead over Barkey once the stops were complete.  Barkey had both Askew and Poordad right on his tail.

Kurtz extended his lead to over 10 seconds before Poordad stalled on the backstretch near the support pit lane with a mechanical issue.  This brought everyone back to Kurtz’s rear bumper.

On the restart, Squadra Corse’s Fuentes was able to get past Askew and immediately started pressuring Barkey for second.  The pressure was kept up for a couple of laps before Fuentes went wide exiting the final turn, which allowed Barkey to open up a gap.

In the final couple of laps, Barkey tried his best to make a run for the overall win.  However, Kurtz was able to hold off Barkey to take the win.

Kurtz and Braun were just a quarter of a second ahead of Barkey and Marcelli at the finish.  Fuentes and Baptista were third in their Ferrari, while Wilson and Russell Ward were fourth in their previous generation Mercedes.  TR3 Racing’s Megrue and Bill Sweedler were a lap down in fifth.

In GT Sports Club America, Gates completed a weekend sweep with another flag-to-flag victory in his Porsche 911 GT2 RS CS.  His margin of victory was a full minute over Bell.

GT World Challenge America powered by AWS will be off for the next few weeks.  The next race weekend is scheduled to be held at Sonoma Raceway, Aug. 8-9.