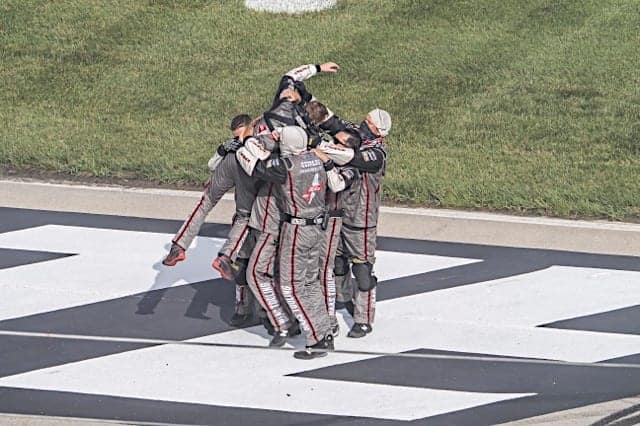 Cole Custer showed he had the chops to do what it took to win at the Cup level. For Custer, equipment has never been an issue, but his mostly lackluster start to the year raised questions. He put those to rest with an aggressive move to the outside coming to the white flag, taking the leaders four-wide and never backing out. The rookie made a veteran move on Sunday, and while he only led a total of five laps all day, he led the one that counted.

Does Custer win the race without a great push on the final restart courtesy Matt DiBenedetto? Probably not; that’s what put him in position. It put DiBenedetto in position as well, and he went from an eighth-place restart to finish third after lurking toward the front all day. Even running with underfunded teams, DiBenedetto had some strong finishes at a few tracks. But those mile-and-a-half intermediates are the hardest for a small team to get a handle on, and so DiBenedetto is learning how to race near the front on these tracks, and he’s doing it well.

The seven-time Cup champion missed last week’s race after testing positive for COVID-19, the first race he missed since entering the series full-time 2002. The ever-gracious Johnson spoke with media before the race at Indianapolis, but it was obvious that the driver was crushed, and frightened.

But following two negative tests last week, Johnson was able to return to the No. 48 this weekend, and he returned with a vengeance.

Sunday saw Johnson with something to prove, and he drove like vintage Johnson to prove it. He charged into the top 10, and then the top five to start the final stage. And true to Johnson’s 2020 luck, felt a growing vibration midway through the first fuel run of the stage. That turned out to be a tire issue, and he moved forward quickly with fresh rubber.  But on a late-race restart, Johnson got turned by Brad Keselowski, who was trying to pass him while he was trying to make a pass on Ryan Blaney. While he went around without hitting anything, Johnson’s efforts were for naught, with an 18th-place finish for his efforts.

But the reality is that, in this season of uncertainty, Johnson’s diagnosis and quick return are a best-case scenario. It could have been much, much worse. Missing races in his final season could have been secondary. We all got lucky this time.

Polesitter Kyle Busch has two Kentucky wins, but Sunday wasn’t the day for a third. After leading the field to the green flag, Busch lost the lead to Aric Almirola, and the news got worse from there. Just before the end of the second stage, Busch reported that he felt like he had an issue with a rear shock, and not long after a top-10 restart in the final stage, his car broke loose and bounced off the wall.  Busch saved it from spinning but reported that the car was “broke” on the radio, and while he stayed on the lead lap, his hopes of winning were dashed. Busch finished 21st.

Defending race winner Kurt Busch had a strong car all day, and that put him in a great position in the final 100 laps. While he didn’t lead a lap, he was solidly in the top 10 for most of the afternoon and came home fifth. Busch sits 10th in points, a good position for a playoff berth.

Last week’s winner and point leader Kevin Harvick had a little strategic luck on his side when the caution flew during a late pit cycle, which bumped him into the top 10. From there Harvick made the most of it, working his way to the lead by the final restart.  He took the lead and might have made a race of it with Custer as the rookie took it four-wide, but contact with Blaney meant dropping back to fourth at the checkers

Stage one winner Almirola had a dominant car early and took the lead from Kyle Busch almost as soon as the race began and held it for 128 laps. But while he remained a top-10 threat, he couldn’t find the winning mojo and settled for eighth.

Stage two winner Keselowski waged a fantastic battle for the top spot with Martin Truex Jr. early in the final stage, but couldn’t hang on.  He did hang on for a solid finish, coming home ninth. He looked like he might be coming for more after charging by Johnson in the final laps to regain some of the position he lost on the final pit cycle, but the caution flags didn’t fall in his favor.

Custer’s win shakes up the playoff picture a bit. Because Custer is currently 20th in points, that makes 15th place the cutoff to make the playoffs on points. As of now, that leaves Austin Dillon and Tyler Reddick out in the cold and Johnson and William Byron just inside the cut line.

There are still a couple of drivers outside the top 15 who could pull off a win. Erik Jones won at Darlington last year. Reddick has looked like he could break through as a rookie. Ricky Stenhouse Jr. is a threat on the Daytona oval.

Fans have been treated to nine different winners this year as well as another group who looks like they could win at any time. This might be the hottest summer we’ve seen for the playoffs, and things are just heating up.

It’s All-Star week, baby! There are a couple of interesting reasons to tune in to the 2020 edition. One, it’s at Bristol Motor Speedway. The race is traditionally held at Charlotte Motor Speedway, but the schedule shift meant Charlotte hosted an extra points race, with the All-Star event postponed until midsummer. This year will be the first time the event has been held at a short track, and with a million dollars and no points on the line, it’s probably going to be exciting.

But we also see a couple of rules changes here that bear watching. One, the cars will have a different look, with the car number moved back toward the rear wheel well, allowing logo placement on the doors. If sponsors like it, it could stay that way, much to the chagrin of many fans. We’ll also see undercarriage lighting, but don’t expect that to become a thing anytime soon.

The other rule NASCAR is testing out is the choose cone rule, a staple at many local short tracks. The rule allows all drivers, not just the leader, to select the lane they want to restart in. It allows for a certain amount of strategy. Bristol isn’t quite as much of a one-groove track as it once was, but this rule could allow a sneak attack from a driver willing to take his chances on the least favored line, and mire others a few spots further back than they might otherwise have restarted.  It also eliminates jockeying for a preferred spot on pit road, which gets a little silly at some tracks. This one does bear watching because we’ve seen it before where NASCAR tries something in the All-Star event that later happens in points races.

How… come all eyes will be on Bristol?

There’s another reason this year’s All-Star race will have the industry paying attention, and that’s because it’s the first race since March to have a significant number of fans in the stands. The race will play host to 30,000, far below Bristol’s capacity, but a significant crowd. Fans will not be allowed in the infield.

The real test will be in a couple of weeks because that’s the incubation period for the SARS-CoV2 virus. If there’s an outbreak traced to the race, it’s unlikely fans will be in the stands for the fall playoff races. If not, it could mean some fans will get to see races live this season. This is a big test not just for NASCAR but for all sports for the foreseeable future.

the cars look STUPID, Hey NASCAR lets drive more fans away, We got rid of most fans with there stupid playoff, stage racing, stage points and the worst thing in all of sports win and your in, Now lets change the look of the cars that will drive move fans away, and lets put lights under the car that will make them run better, It’s almost like very young kids and not very smart one’s are running NASCAR,