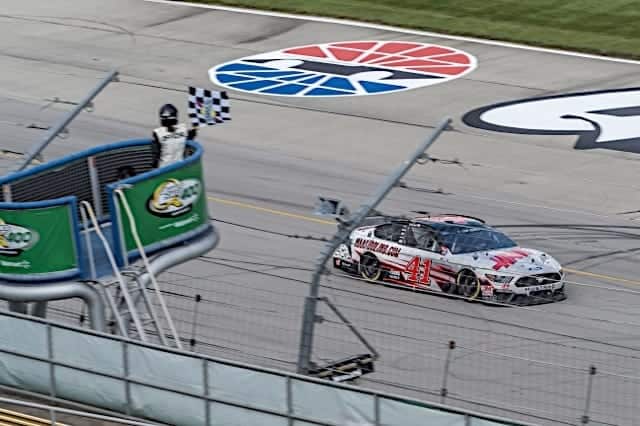 For the second season in a row, Kentucky Speedway produced a thrilling finish to its annual Cup Series race.  Last year was the battle of the Busch brothers, a side by side battle between Kurt and Kyle that went all the way to the checkered flag before Kurt emerged victorious.  This year’s finish included a four-wide pass for the lead at the white flag and the least likely contender racing away from the field over the final circuit.  As Ryan Blaney and Kevin Harvick sideswiped each other, Cole Custer slipped past both of them and Martin Truex Jr. to take the lead and win his first Cup Series race.

Yet as surprising as Custer’s victory is, it’s even more shocking that a really boring race produced such an incredible finish.  Up until the scramble for the lead on the final restart with two laps to go, there was almost nothing redeeming about Sunday’s race.  Clean air was as important as ever on the 1.5-mile track.  Passing, even with a faster car, was still difficult.  And remember that these conditions have persisted despite NASCAR’s use of an aero package that was supposed to magnify the effects of the draft on intermediate tracks in order to make passing easier.  NASCAR got lucky that Custer’s run to the checkers saved this race from being the perhaps the worst of the season.

It’s not that unusual for a bad race to get saved by a great finish.  One of the best examples is the Cup Series race at Auto Club Speedway in 2011.  That was the one where Harvick, running second to Jimmie Johnson on the last lap, shoved the No. 48 deep into turn 3, throwing Johnson off the racing line and forcing him to check up.  Harvick slipped past to take the lead and win the race.  It was a great finish and a crafty, bold move by Harvick.  But other than the finish, nothing memorable happened in that race.  Kyle Busch led over three-quarters of the race’s laps and looked to be on his way to an easy victory until a late restart gave Harvick and Johnson another chance.  A great finish saved an otherwise lousy race from being completely forgotten.

Many of the problems that plagued the Fontana race nine years ago were apparent on Sunday.  Aric Almirola took the lead early in the race and appeared to have the dominant car.  However, a caution during a green flag pit cycle near the end of stage two shuffled the field and put Almirola toward the middle of the pack.  It seemed like only a matter of time before he would be back up front, but he never took the lead again.  Almirola’s car handled so differently in traffic that he had to scrape his way back to the top 10 in the closing laps.

It’s true that good racing does not necessarily equal ease of passing, but this felt like a race where the aero package did not work the way that NASCAR intended.  If Almirola’s car was fast enough to dominate the early portion of the race, shouldn’t he have been able to drive through the field?  Or, if his car was not actually that fast, why did nobody challenge him for the lead?

It’s not like this was a more typical night race at Kentucky where the setting sun and lowering temperatures cause track conditions to change.  Sunday’s race was smack in the middle of the afternoon.  Given the relatively stable track conditions, teams should have been able to predict how their cars would react and make the appropriate adjustments.  But other than Truex, who drove to the lead after starting in the back of the field, everyone else was at the mercy of clean air and track position.  Usually, by the third or fourth lap after a restart, the field had settled down and passing opportunities became very limited.  Wherever you settled out was effectively where you were stuck until the next restart.  That’s not a sign of a good race.

Just because Kentucky had another good finish does not mean that NASCAR’s work on an intermediate track aero package is done.  The current setup definitely makes restarts a great spectacle, and it has helped the Cup Series produce some good races in the last year and a half (think Kansas Speedway’s spring race last season.)  But a race that relies on restarts to be its most entertaining element is a race that lacks options for drivers and substance for fans.  If the high downforce aero package doesn’t solve the clean air problem the way NASCAR intended, then the Cup Series might as well revert back to the higher horsepower package it used before.

At least Sunday’s race was another sign that Custer can live up to his potential as a capable NASCAR driver.  Until earning a top five at the Brickyard 400 last week, Custer’s rookie season was a huge struggle.  His finish at Indianapolis, and especially the win on Sunday, have turned his entire year around.  Yes, Matt Kenseth’s spin gave Custer another chance to challenge Harvick and Truex on the final restart.  He was lucky to get that opportunity.  But luck didn’t take the No. 41 car to victory lane.  Custer played the final two laps perfectly and scored a well-earned victory, the first by a Cup Series rookie in four years.  He’ll compete in the All-Star Race in a few days and the playoffs in a few months.  It is a great story for a race that looked like an absolute dud.

Ultimately, these bad races with great finishes are a matter of perspective.  It’s fair to critique the poor quality of racing throughout the afternoon and expect NASCAR to be mindful of the shortcomings of the Cup Series aero package.  But the finish is part of what makes NASCAR great.  It’s the moment where a struggling rookie makes a daring move to defeat his veteran competitors and give us a potential taste of what’s to come.  No matter how bad the race was, Custer made his first Cup Series win memorable.  And perhaps it’s better if the decisive pass, much like Fontana in 2011, is the only thing that fans remember about this race.

If you sat through 3 hours of a movie and saw 5 minutes of enjoyable film, would you call it a good movie? I wouldn’t. How many people are willing to sit thru a couple hours of boredom, hoping that the finish saves the day? Congrats to Cole Custer, but if it wasn’t for restarts the ‘race’ would have been like watching paint dry…which it mostly was. Problem with the bigger tracks…all spread out so very little racing 2 laps after the restart.

It was a beautiful weekend up here in the Boston area. I was outside all day doing yard-work and this 61 year old body is feeling it today. I usually take a break or two to check on the race, but it never entered my mind. Congrats to Cole Custer. I was at New Hampshire Speedway in September 2014 when he dominated a truck race and he was only 16 years old!

Why didn’t the stick-um extend all the way down to the inside shoulder? Any driver who tried to pass in the inside line was at a distinct disadvantage and never had a chance to pass anyone. And drivers lost a lot of places on a restart if they were on the inside.

If you don’t think NOOSECAR is dying, you needed to see just part of the race at Ky. It was too difficult to watch and only was able to endure about 50 total laps. Didn’t watch the entire race, let alone the finish. Does a good finish mean a good race? The answer to that question is no. A race like Sunday was absolutely pathetic. At one time during the second stage, there had only been three leaders. Typical mile and a half race. Round and round and not a lead change in sight. And NOOSECAR wonders where the fans went. Well you got WOKE and thought that would help. It won’t because Millennials and Gen Zers don’t care. Give me a video game in Mom’s basement. the more races like Sunday will simply speed the demise of the sport and put it back to being a regional sport in less than 5 years. No one wants to watch a race like that.