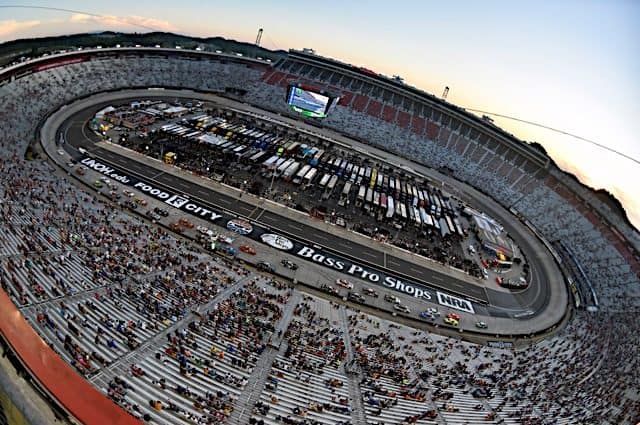 Beside the Rising Tide: For NASCAR All-Star Race, 2 Out of 3 Ain’t Bad

As our long-time friend Michael Lee Aday (aka Meatloaf) used to tell us in one of his operatic, overly bombastic, teenage testosterone-fueled hits, two out of three ain’t bad.

NASCAR’s annual All-Star event has fallen out of favor with most of the race fans I communicate with regularly. If the All-Star Race was to continue on a conceptual level, those fans wanted to see some changes made. \

First off, the Cup schedule is too damned long as it is. Setting aside a separate weekend to host the event may have appealed to drivers and team members who got to sleep in their own beds a couple weeks in May, but it didn’t go over well with fans. For years, there have been calls to either run the All-Star Race on the Friday night of the Coca-Cola 600 weekend or go big and run it as a mid-week event. Check that one off the list. This year’s All-Star Race will in fact run on Wednesday night, July 15, weather permitting.

The Cup schedule has become bloated with events on 1.5-mile cookie-cutter tracks. The All-Star Race would be better run on a short track where the drivers could let their knuckles drag, bang some fenders and, uh, well, rattle the other drivers’ cages a bit. Somewhere in a remote corner of the Bristol Motor Speedway property there’s probably still a couple pairs of beer-fueled rednecks fighting over the last laps of the infamous 1999 Bristol night race, an event notorious for its finish that saw leader Terry Labonte thrust into the spin cycle off the front bumper of the Intimidator. If you need me to tell you who that was, you probably need to move on to the next column.

A valid argument could be made that on Aug. 28, 1999, NASCAR reached its absolute zenith. There was never going to be another race finish that ignited tidal waves of passion among fans on both sides of the fence as to whether Earnhardt’s tactic was “good hard-racing” or dirty pool.

OK, fans. You wanted the All-Star Race moved to a short track. Wish granted. In fact, we’ll return to the scene of the crime nestled there in the hills outside of Bristol, Tenn.

OK. Mid-week race date. Check. Short track. Check. Now I have to insist that what all racefans really want to see is racecars’ numbers moved from their traditional place on the doors back a couple feet onto the cars’ rear quarterpanels. That way the sponsors’ logos on the side of the car can be bigger. What race fan doesn’t want that?

As long as we’re blue-skying the perfect All-Star event, how about we add some neon-styled undercarriage lighting to the Cup cars? Yeah, fans have been begging for that. Or maybe they were about two decades ago when neon undercarriage lighting was considered cool. For about a month if I’m recalling correctly. Yep, I had a blue set on a 1987 Lincoln Town Car I owned in the period, and those lights surely did make that two-and-a-half-ton luxo-barge appear to be gliding down the road inches off the ground. Until the local gendarme hit some party lights of their own and wrote me a citation for a grotesque violation of the Motor Vehicle Code.

I’m still on the fence about having a NASCAR All-Star Race, despite NASCAR granting two out of three of fans’ requests. The purity of the event has long since been soiled. It was such a simple concept when Humpy Wheeler first came up with the idea. Any driver who had won a race the previous season or in period of time between that year’s Daytona 500 and the Charlotte Motor Speedway All-Star Race was eligible to compete for “big cash prizes!” in the race. Over the years, the eligibility requirements for the race have changed so many times my head still reels trying to recall them all.

In fact, it’s a wonder that the All-Star Race concept survived at all. Someone thought it would be a good idea to move that race (then still known as The Winston) to Atlanta Motor Speedway. Oh, and have it on Mother’s Day. The fact so few fans attended despite a win by fan favorite Bill Elliott, a home-state hero in Georgia, nixed that concept right quick. I believe the plan was to move the race from track to track annually, but after the Mother’s Day disaster the event settled down to stay at Charlotte up until this year.

This year’s All-Star Race qualifications include:

A valid argument can be made that unlike the stick and ball sports every Cup event is basically an All-Star Race. Somewhere around 36 of the best drivers in the world take to the track with about four drivers who basically don’t have a chance in hell of winning other than in extraordinary circumstances (call it the Justin Haley clause) and have at it. It’s not like there’s a National League and American League of stock car racing, nor conferences, divisions or regions.

Now don’t be sad. ‘Cause two out of three ain’t bad.

Some Memorable Moments from the All-Star Race

1985 – This was the inaugural running of the Winston. Labonte and Darrell Waltrip took control of this race after Geoff Bodine and Harry Gant suffered engine meltdowns. Late in the race, Waltrip’s car came on like the team had hit the afterburners. And the engine in Waltrip’s Chevy exploded into shrapnel as he crossed the finish line. NASAR never got a chance to do a post-race engine check on that car, and rumors have existed for years the engine built by Junior Johnson was way oversize and Waltrip had been told to clutch the car on the cool-down lap and grenade the engine to avoid detection

1986 – The Mother’s Day massacre (at least as far as attendance). Bill Elliott won the event. Hopefully one day his mom forgave him.

1987 – This race was a fierce one between Dale Earnhardt and Elliott, the two hottest drivers on the circuit that year. The event also gave birth to the Pass in the Grass nickname. That’s a misnomer, however. Earnhardt was leading Elliott when he went into the infield grass, and he was still leading when he returned to the track. There was no pass. There was some hooliganism on the backstretch that same lap, with NASCAR’s chief bad boy getting the better end of the bargain.

1989 – Waltrip and Rusty Wallace emerged as the drivers to beat in that year’s event. With two laps left to go, Wallace pounded DW’s rear bumper, sending him sliding into the infield grass. Waltrip was not amused and told reporters that he hoped Wallace choked on that $200,000 prize. That was a bunch of money back then. To add some contrast, Waltrip had finally won the Daytona 500 that year and won $184,900 for his victory. In 2015, the last year NASCAR released prize money details, Landon Cassill won $262,390 for finishing dead last in that year’s Daytona 500.

1992 – Davey Allison was having a hot-and-cold season early in 1992. After winning the Daytona 500 to start the season, his luck always seemed to be either great or terrible. That year’s Winston featured the first running of the event under the new track lighting at Charlotte. Late in the event, it came down to a battle between Allison, Earnhardt and Kyle Petty. The cars were swapping paint racing to the checkers. Allison won, but a crash right past the start-finish line put Allison and his Ford hard into the outside wall, knocking Allison out cold. Allison was also slated to run for the Winston Million the following weekend, but in the Winston he’d destroyed his favorite car, chassis number 007. Also of note, the 1992 Winston was the first modern-era Cup race on a big track of a mile or more in length run under the lights. The experiment was not without its hazards. I’ve heard track owner Bruton Smith had his eyebrows burnt off because he was standing too close to a lighting fixture the first time the lights were tested.

1995 – This race is perhaps best recalled for two limited-use paint schemes; Earnhardt’s silver No. 3 car and Elliott’s Thunderbat Ford resplendent in black with snot-green graphics. Those two cars kicked off the one-race-only, special paint scheme and graphics collectible cars scheme that bankrupted so many hardcore fans back in the day.

1997 – Jeff Gordon won that year’s Winston at the wheel of a car that carried the nickname T-Rex (it was being used to advertise Jurassic Park: The Ride). Legends still vary as to whether Gordon was at the height of his not-inconsiderable abilities that night or if the car had some cutting-edge technology Ray Evernham had pioneered and decided to run at the non-points-paying Winston in case he got caught. Perhaps it was a combination of the two. Whatever chicanery was or wasn’t afoot in that race, NASCAR asked the No. 24 car team not to bring that particular Chevy back to the racetrack again.

2001 – NASCAR basically threw the rulebook out the window that night in Charlotte. As race time approached, any fool could see there was heavy lightning in the area, the harbinger of a storm. Any fool that wasn’t in the NASCAR control booth at least. Just as the race started, heavy rain started, and a big lap 1 wreck wiped out some big-name drivers, including Gordon and Dale Earnhardt Jr. But NASCAR decided to have a do-over. Teams were allowed to repair their cars or even break out the backup cars in the garage area for a second attempt at getting the All-Star Race restarted. That is still the damnedest thing I’ve seen at a racetrack. Gordon went on to win that race (in his backup car), which added fuel to the conspiracy theory at the time that claimed NASCAR wanted their rapidly emerging superstar to win whenever possible. But then someone went ahead and invented Jimmie Johnson.

Matt joined Frontstretch in 2007 after a decade of race-writing, paired with the first generation of racing internet sites like RaceComm and Racing One. Now semi-retired, he submits occasional special features while his retrospectives on drivers like Alan Kulwicki, Davey Allison, and other fallen NASCAR legends pop up every summer on Frontstretch. A motorcycle nut, look for the closest open road near you and you can catch him on the Harley during those bright, summer days in his beloved Pennsylvania.
Previous Martin Truex Jr., Michael McDowell Win Pole Positions for All-Star Night 2020
Next Couch Potato Tuesday: Kentucky Action Substandard Until Lap 265 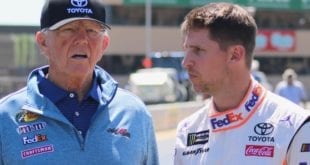 Beside the Rising Tide: An Open Letter to Michael Jordan