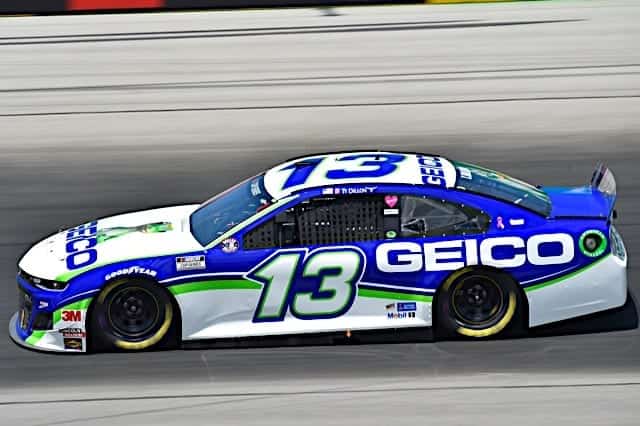 Ty Dillon was back at the head of the class this week at Kentucky Speedway in the NASCAR Cup Series. The driver of the No. 13 Germain Racing Chevrolet earned a 16th-place finish. The third-generation driver moved up steadily, finishing the first stage in 23rd and the second in 18th. Dillon battled a loose racecar, but it probably helps to have veteran crew chief Matt Borland calling the shots on pit road.

Dillon grabbed his third finish of 16th or better in the last five events, despite not starting in the top 25 in any of them, though he has been doing that for the better part of this year, so perhaps it shouldn’t come as a surprise. Six times in 2020 Dillon has finished 10 or more positions better than where he started.

After the race, Dillon spoke about how the team’s steady improvement is reflected in the recent consistent finishes. “Solid 16th-place finish today at Kentucky.” Dillon said. “That’s two top 16s in a row, which is awesome. I’m so proud of our GEICO Racing team, and we are going to keep digging and building on these consistent finishes. We are learning a lot and definitely getting better. Our team is going to go after it this second half of the season.”

Michael McDowell was in the hunt for yet another top-10 finish before he got a poor restart at the final restart of the day. By the time he settled into the field, he was in 23rd, a far cry from the lofty standard that team has set in recent weeks.

Daniel Suarez only finished 28th, but the greater significance was that the No. 96 Gaunt Brothers Racing Toyota finished on the lead lap for just the third time in 2020. It’s a small win for the organization, and it’s pretty safe to say that Suarez certainly elevates that whole team.

The Xfinity Series pulled double duty this past weekend, racing on both Thursday and Friday night at Kentucky. While the same driver won both races, it was a much different story for the underdog class.

Thursday featured another chapter of Kyle Weatherman and his incredible contribution to Mike Harmon Racing. Just two weeks after matching the team’s best-ever finish, Weatherman went out and topped it with an eighth to collect the first top 10 for MHR. Following Weatherman to the line in ninth was Ryan Sieg, followed by Brett Moffitt in 10th. Jeremy Clements, Joe Graf Jr. and Jesse Little all enjoyed decent runs, coming home 12th through 14th respectively.

Friday wasn’t quite so productive for Weatherman, as he damaged the car on the opening lap and never even crossed the line, instead heading straight to the garage. Clements claimed the top underdog spot by finishing 11th, while Brandon Brown got 13th and Little 14th. Josh Williams rounded out the top 15.

The NASCAR Gander RV & Outdoors Truck Series teams ran their race on Saturday, and it ended up being a short one courtesy of Mother Nature. Rain halted the action just after the second stage and left little hope of continuing the event. Derek Kraus continued his solid performance with an eighth-place finish, while Spencer Davis wound up 14th when the skies opened and drenched the speedway.

The NASCAR Cup tour heads to Texas Motor Speedway next weekend. Look for more for John Hunter Nemechek, as he finished 21st in his first Cup start at Texas last fall.

As for the Xfinity teams that will also take to the 1.5-mile track in Fort Worth, Sieg has finished in the top 10 in his last two starts at Texas. Sieg has seemingly been on the cusp of victory forever and could break through any time now.

Williams is also a safe bet; he not only finished in the top 15 in both races there last season, but also has six such finishes in his 15 starts this year, including last weekend at Kentucky.

8th BABY!!!!!! I can’t thank Everyone who has helped me to this point in my career Hopefully this is just the beginning ??????. @NASCAR pic.twitter.com/RgR9QLDa1l

Was told they didn’t show what actually happened to cause our tire go down, sick to my stomach for tearing up a good car. Oh and I looked like a total goofball on tv. Thanks for everyone’s messages! pic.twitter.com/BzbAH5qucd

Had another Top-10 run going today, but unfortunately the last restart didn’t go our way and lost some valuable track position. Thank you to @LovesTravelStop for coming on board with us. Ready to rebound with them at @BMSupdates and @TXMotorSpeedway! pic.twitter.com/j5aW9ORvvD

Bummed we didn’t get to run that one to the end because of the rain. Felt like we were going to be in a great spot to make a run at it that final stage and had some good strategy to go with it.

At least the trucks in one piece and we’ll get ready for the next one ?? pic.twitter.com/dom9ArFkj0

Always one of my favorite weekly articles, hearing about some of the lesser know names and teams.

Would love to see a related series next season, maybe something like Rookie Round up and tracking the ROTY standings