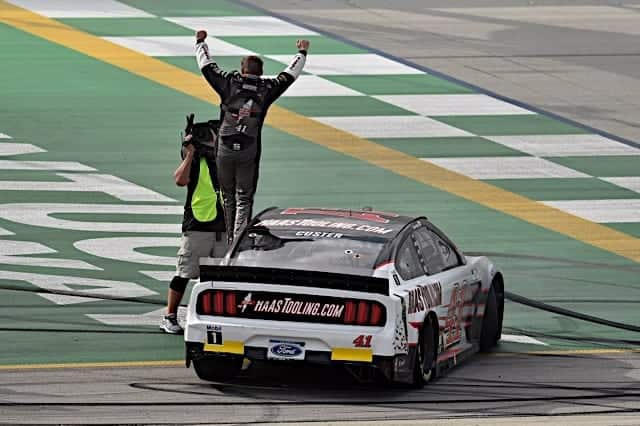 1. Cole Custer Pulls a “Where Did He Come From?” in More Ways Than One

As Quicksilver said in The Avengers in his one truly memorable line, “bet you didn’t see that coming.”

By that, I mean Cole Custer making his thrilling late charge to win his first NASCAR Cup Series race at Kentucky Speedway. His wild run along the outside while three more accomplished drivers were bumping into each other below him not only salvaged another (sorry Kentucky, but it’s true) dull affair at that particular track, it injected a needed bit of unpredictability into the few remaining parts of the 2020 NASCAR season that still felt like they were following a script.

Prior to this weekend, there was a real chance that none of the four very good Cup drivers would make the playoffs. That’s no longer a concern, as Custer is in, and at least one well-known veteran won’t be (more on that in a bit).

Think the consistently impressive Tyler Reddick or rapidly improving Christopher Bell had the best shot to win top rookie honors? They still might, but with Custer claiming a checkered flag, they may have to win a race themselves to ensure it.

In short, some logical assumptions have now been tossed out the window, and that’s always fun. Here’s to a few more unexpected surprises before the regular season ends.

2. Whose Playoff Chances Were Hurt the Most By Custer’s Victory?

This is one of those questions that has both immediate and longer term answers. Austin Dillon is the driver whose fortunes changed in an instant, going from the bubble to the outside looking in just like that.

But unless he can gain some spots on the points list, it’s Jimmie Johnson who looks like he could be sweating things out all the way to Daytona International Speedway. Not only is he not secure at all to make it in without a win — the single start he missed due to his positive COVID-19 test might end up looming larger than anyone could have imagined — he also has to wait nervously to see if someone else outside the top 16 in points pulls off what Custer just did.

There are several drivers who could do just that. Erik Jones has won before and might be driving for his job at this point. Reddick has shown enough that it wouldn’t be shocking if he also found his way to victory lane. And Bubba Wallace has looked faster this year than ever before.

It’s safe to say Johnson’s final Cup season hasn’t gone smoothly at all, but missing the playoffs would be an indignity that would top any he’s experienced in 2020 and a bummer of a way for him to exit the sport.

3. Maybe the All-Star Race Will Actually Be Fun

The NASCAR All-Star Race perennially has a problem that no other major sport’s equivalent event has, and that is that it’s just not that special seeing the same top drivers who duke it out week after week race each other again. Other sports give us athletes who usually aren’t on the same team, the best of the best in combinations you’ll only see on All-Star squads. In NASCAR, it’s more or less just another race minus the back markers, and traditionally on a track that can’t create thrills on its own.

That’s why the powers that be have had to introduce so many gimmicks to make the All-Star Race a thing, and if you ask most fans, they’ll probably tell you it largely hasn’t worked. This year, however, there’s at least some reason to be optimistic that things will be different.

The change in venue to Bristol Motor Speedway is the most obvious one. Not every Bristol race has been a barnburner over the past few years, but a short track race is well worth a shot for NASCAR’s midseason event. Plus it’s being held on a weeknight, which also helps give it a unique feel compared to past editions.

The unusual paint schemes and under-car lights have received some flak on social media, but if you simply take them in the spirit in which they’re intended — that is, as small tweaks meant to spice things up visually and provide a contrast to the same old, same old — it’s worth giving them the benefit of the doubt and just seeing how they turn out.

If nothing else, they’re proof that NASCAR is just tinkering around the edges and doesn’t feel pressure to try to create some spectacle out of whole cloth. I’m not expecting the best stock car race I’ve ever seen, but I do expect we’ll at least be talking about the All-Star Race more than usual later this week.

Several of my family members who are casual NASCAR fans ask me from time to time why something like IROC wouldn’t work today. Not being an expert on such things, I tend to tell them it would be partially due to scheduling issues but mostly because of money. It’s a good idea on paper that would be hard to make happen.

Of course, I’m not Tony Stewart or Ray Evernham, who think that they have a twist on it that makes sense. As announced this week, the Superstar Racing Experience is set to kick off next year with 12 drivers competing in six races. Though short tracks are the initial focus, it sounds like road courses could be in play as well. Stewart will be getting back behind the wheel himself, which should help stir up interest, and the series already has a TV partner in CBS.

So why the comparisons to IROC? Mostly because of this quote from Evernham.

“We want to make that machine be a big part of it, but it’s got to be the driver, crew chief, the human being controlling the machine, not the machine controlling the outcome of the competition,” he said. “That combination of driver, crew chief and machine, no computers telling you what to do, no simulation. It’s really about the competition, how well that driver and crew chief can make that machine go against one another.”

If the SRX can convince some top names from other forms of racing to join in, so much the better. It’s not exactly IROC, but calling SRX a spiritual successor isn’t crazy, and a handful of additional races next summer doesn’t sound bad at all.

All the joking questions about whether NASCAR drivers would be able to fight during the conditions put in place due to the pandemic were answered at Kentucky when Xfinity Series drivers Noah Gragson and Harrison Burton had a post-race donnybrook at Kentucky. It didn’t last long before crew members stepped in, but Gragson threw one heck of a right hand before they did.

He was provoked by several shoves from Burton, who isn’t without fault here as it definitely takes two to tangle. But Burton’s assertion that Gragson’s on-track actions were really the spark to this particular flame have merit, and he’s not the first driver to strike that tone going back even to the Gander RV & Outdoors Truck Series in previous seasons.

Gragson was unapologetic in his post-fracas interview, stating that it was just hard racing. Maybe he’s right.

Yet it’s also very clear that he doesn’t mind the heel role, to borrow some pro wrestling terminology. If he’s the guy in the Xfinity Series that a bunch of people are booing while his own fans cheer, that seems to suit him just fine.

Heels do tend to get their comeuppance eventually, but if you’re lifting plenty of trophies along the way, who’s to say they don’t end up getting the last laugh? (Just ask Kyle Busch.) Perhaps Gragson should simply embrace this idea, because it’ll give people a reason to root for or against him when he makes it to the Cup Series, and that’s something not every driver brings to the big show.