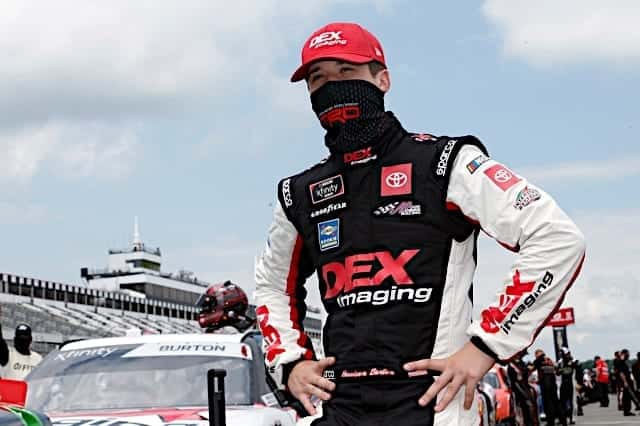 When Harrison Burton approached his parents, Kim and Jeff, about racing at the ripe age of four, they wanted to make sure he did it because he loved it. And did he ever.

While Jeff was out touring the NASCAR Cup Series circuit, it was Kim that traveled to races with her son. It started with quarter midgets, before moving to late models and ultimately the NASCAR Xfinity Series now, where the No. 20 team sits sixth in the championship standings through 15 races.

Burton will never forget his roots, remembering his mother is his biggest fan.

“She took me all over the country, just me and her and my quarter midget, and we were off racing somewhere,” Burton recalls. “That was a really fun time for me as a kid to spend that time with my mom and a couple other people that came along that really influenced me as a person and made me into the person that I am today.

“That’s something I’ll always remember; her always being there supporting me.”

Prior to the COVID-19 shutdown during the 2020 season, Kim had missed just one of her son’s races during his entire racing career. That came in 2017 at Memphis International Raceway, where Burton would score his third win of the season en route to the K&N Pro Series East championship (now ARCA Menards Series East).

“I haven’t missed a race of his except for attending my best friend’s daughter’s wedding a couple of years ago,” she said. “Mostly because I’m his mom and I want to be there, but he was so young racing, and he needed a parent there, and Jeff was working. Luckily, he could go to the one that I missed.”

When Kim found out Burton had won the race, she recalls there being a lot of “screaming and cheering” at the wedding, which isn’t surprising if you watch a race near her.

Over the years, Kim has been known for being animated atop Burton’s pit box, just as she was when her husband raced, and she often live tweets races. It’s entertaining for sure, but not for show. After all, racing is a dangerous sport, and she wants her son to be safe on the racetrack.

“I’m not a very good person of keeping my emotions inside, so I’m probably no more nervous than any other parent that watches,” Kim stated. “I have an Italian heritage, and some of that comes out, I guess. I’ve never been good at hiding my feelings.”

She noted that Burton’s teams have always made fun of her, all in good light. Previously when she would attend Jeff’s races, it was different, because the crew chief relied on her for letting him know what laps Jeff’s rival competitors pitted on.

Burton says it didn’t matter if he was competing at the local or national level, his mother consistently has shown nerves. But he enjoys the passion that comes out.

“She’s someone that wears her emotions on her sleeve, and she’s really passionate about anything my sister (Paige), my father or myself are passionate about it,” Burton added. “She wants us to succeed as much as she wants herself to succeed.

“She hates the fact that she’s on TV showing that. She hates that they put the camera on her, but I guess that makes for good television.”

Since NASCAR returned from the COVID-19 shutdown nearly two months ago at Darlington Raceway, there haven’t been any live shots of Kim hootin’ and hollerin’ in Burton’s pits. With the current guidelines, only team members are allowed at the track most weekends, though she was able to attend the June 20 race at Talladega Superspeedway from a suite.

Not being close to the action has been a real change for Kim, instead having to watch the races from the Burton household in North Carolina.

“I don’t do well sitting down, so I have my computer with the radio scanner on the counter and basically pace,” Kim says of her new race day setup. “I can yell in my own house, and no one knows it. My friend Nancy asked me if I wanted to come up and watch with her outside on her back porch, and I just said, ‘I’m not a good race-watching partner.’ At home, that’s how I let out my nerves, I can get as loud as I want to there.”

Because Kim’s not able to be in attendance, the anxiety level has sky-rocketed. Having to watch through a television screen is foreign to her, and she wants to make sure she can be around should something go wrong at the track.

“Nobody wants to watch what happened to Ryan Newman [at Daytona International Speedway earlier this year] from home and have to drive eight hours to get to know what’s going on,” she said. “I felt much better being there, even though we weren’t inside the track – I could be wherever I need to be if I had to. We were allowed to be in a suite there [at Talladega], so we had the TV, I had my radio that I could hear, and I could obviously see. That was a lot better than having to watch a [superspeedway race] from home, I don’t know if I would be able to do that.”

Burton, too, feels it’s awkward not having his number one fan in attendance for his races.

“It was strange not going with my mom or my dad there and doing my own deal,” he said. “What was really strange was after the race I won [at Homestead-Miami Speedway] and had a whole race afterwards, by the time I got home they wanted to celebrate that I had won, and I was bummed out because I made a mistake and finished eighth in the second race. It has been interesting coming home, and your emotions are normally pretty leveled out by that point, but my mom’s aren’t. She’s still mad, excited or whatever it may be.”

Now that the Xfinity Series has been traveling around the country, Joe Gibbs Racing has been flying its drivers and teams to and from the racetrack. For the first four races back from the coronavirus shutdown, everyone would drive their own vehicles to the track to limit the potential spread of the virus and properly social distance.

Even though Kim isn’t allowed to be at the racetrack, she’s in constant communication with Burton pre- and post-race.

“I definitely get a lot of phone calls from her and my father both,” he said. “My dad is trying to help me out and give me advice about tracks I’ve never been to before, and I have to strap in and go from lap 1. My dad is definitely more of a hands-on role, where my mom is more there for support and trying to be there for me, which is awesome.”

Straight up, Kim misses being at the racetrack.

“I miss not knowing what’s going on,” she added. “If you think about it, Harrison being a rookie and having to start these races not having a lap on the track, never being to most of the places in an Xfinity car, depending on where you are. Even though they get simulation, it’s not the same thing as a real racecar. I don’t care what anybody says, especially for a rookie.

“It’s been extra hard not being able to be at the track, because as well as TV does, they’re not focusing only on Harrison. If I don’t hear him on the radio or see if he’s on TV, then I don’t know what’s going on. When I’m at home, it’s a lot harder.”

Kim admits that the conclusion of the race is the best part for her, knowing everything went right at the track and Burton finished. Then, she can go back to her daily chores of spending time at the family’s barn or cleaning her residence.

With the current number of COVID-19 cases rising in the United States, there’s no telling when families will be allowed back at the racetrack in full capacity. Kim’s hoping it’s sooner rather than later, mentioning they don’t necessarily need to be in the pit box.

“I don’t know what’s going to happen now with cases rising as far as fans coming to the track, but I know [NASCAR] is not going to let us in the garage, and I totally understand that,” she said. “One day, I hope they’ll lets us back in the stands. There’s so much space. I know they have to have people to police it, but with families being spread out around a two-mile racetrack, you would be more exposed at the grocery store than you would be there, that’s for sure.”

In his rookie season, Burton has scored two victories with five additional top-five finishes. He set the rookie record for most consecutive top-10 finishes to start off a rookie season with 10, bettering Carl Edwards’ 2005 mark of nine.

Since then, though, Burton has a best finish of 12th in five races and even got into a post-race altercation with Noah Gragson last weekend at Kentucky Speedway.

“It’s been up and down,” Burton said of his season. “It started with a lot of ups. We were really going well at the start. We won early [at Auto Club Speedway], and we won Homestead, which was after the COVID break but before the stretch of races where we’ve had misfortunes and things happen. That’s so frustrating, because as a rookie, you always want to learn and get better.”

Regardless, Burton is a lock for the postseason and is hoping to score more playoff points in the coming weeks.

Meanwhile, Kim is proud of her son for the way he’s handled all the adversity in his rookie season and success that has come along the way.

“I think his numbers speak for themselves,” she said. “[…] I think he’s done amazing. He’s had a lot thrown at him, and I think he’s done as well as anybody could expect in this situation in my mind. Of course I’m biased, I’m his mom.”

This weekend, the series heads to Texas Motor Speedway where Burton finished seventh in his only Xfinity start at the venue last fall.