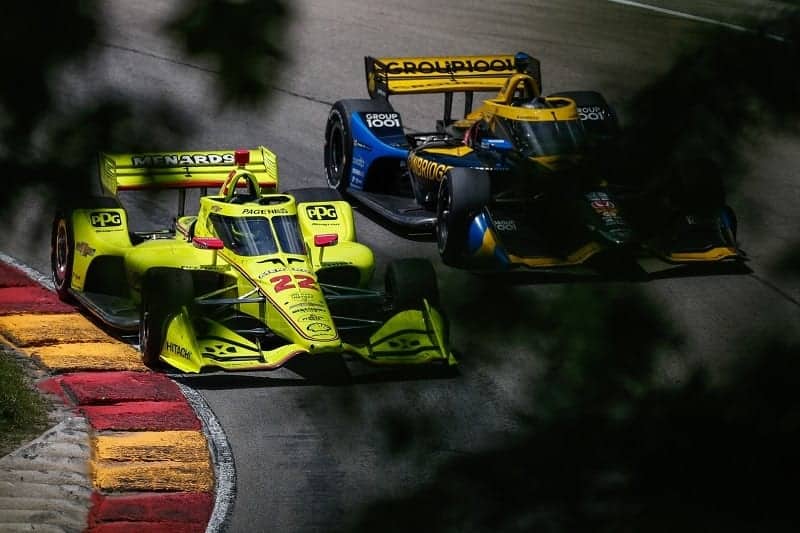 The NTT IndyCar Series normally has one doubleheader on its schedule, but IndyCar drivers have to contest three back-to-back weekends as a result of rescheduling in the wake of the COVID-19 pandemic. Now that the 2020 REV Group Grand Prix at Road America has given viewers their first taste of back-to-back action in 2020, we’re taking a look at what makes these unique events so exciting—and what serves as their downfall.

One of the biggest fears of doubleheader events is that drivers will stage a relatively boring first race in order to preserve their equipment for the second. That wasn’t the case during the 2020 REV Group Grand Prix, though, which highlighted the way strategy can be tailor-made to allow drivers to push their hardest during both contests.

Take Santino Ferrucci, for example. His two sixth-place finishes don’t show the fact that in Race 1, he was mixing it up with the race leaders until a shoddy pit stop pushed him farther down the field. In the second race, the No. 18 Dale Coyne Racing machine sustained lap one contact and then was penalized, forcing him to restart at the rear. Ferrucci fought hard during both events and was aided by excellent strategies that transformed bad luck into a great opportunity.

Ferrucci is only one example. The first event of the weekend was characterized by pit stop undercuts, where drivers pitted early to make up track positions while their competition came in for fuel and tires. The second, however, was all about the overcut. Felix Rosenqvist‘s final pit stop came a lap later than leader Patricio O’Ward, which enabled him to capitalize on his competition’s lower fuel and worn out tires. Two races at the same track, two completely different ways to win.

With two races on the same circuit, drivers have an unprecedented opportunity to understand the ins and outs of the circuit at race pace. In other seasons, competitors would have two days of practice and qualifying, but nothing quite teaches a driver about a track the way racing it will.

That principle really came into practice during the second Road America race as the younger drivers and the rookies put on some of the weekend’s best racing. Rosenqvist, O’Ward, Colton Herta and Alex Palou had great battles for the lead throughout the race, and most of those drivers have a year or less of IndyCar experience.

The upcoming doubleheader at Iowa Speedway could really continue to benefit these younger drivers—especially those who have very little oval experience. Just finishing the first race and understanding the track is great, but really having a chance to put those newfound skills to the test in Race 2 is crucial.

Con: Tensions Are Higher Than Normal

One look at Will Power‘s performance at Road America will show race fans the downside to doubleheader weekends: unchecked tensions can lead to disaster. Power’s frustration at losing the first race led right into a second event where he pinballed his way through the starting grid, leaving broken cars in his wake. Where he’d normally have a week or more to cool down, Power carried all of those hard feelings right into day two. And while his race wasn’t ruined, Graham Rahal and Ryan Hunter-Reay certainly weren’t pleased.

Some drivers are naturally relaxed. Some drivers definitely need a break between races. If the doubleheader at Road America proved to be stressful, then it’s easy to think that things might get worse at the next doubleheader, when drivers are fighting to secure a championship that’s just around the corner. Sure, that added incentive can make for some great racing—but it can also result in some unnecessarily rough passing.

It might seem self-explanatory, but when it comes to doubleheader weekends, the track doesn’t change. That means drivers who struggle at that specific circuit—or who just don’t have the car setup—are going to have a doubly hard time making something positive of the weekend.

Some drivers just don’t get along with a track, which is by no means an indictment of their skill. We all know Scott Dixon is an incredible driver, but it took him his ages to secure his first win at the Indianapolis Motor Speedway road course. It’s a track that Josef Newgarden has historically struggled on, too.

Now imagine that 14% of your performance for the year is going to be evaluated on that one track that you hate, or one that your car just isn’t set up for. While no one seemed to suffer too terribly with issues at Road America, the thorny Iowa Speedway could present a whole other slew of challenges.