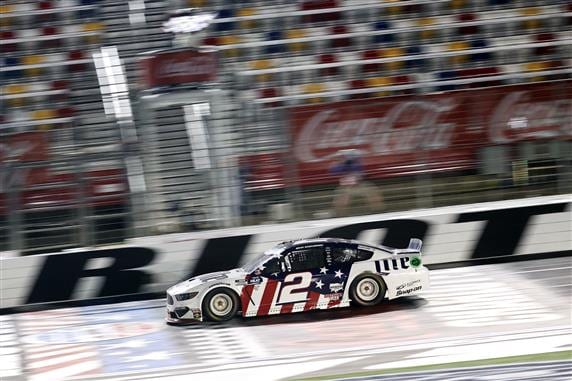 Since NASCAR returned from the COVID-19 break, qualifying has only taken place in one race, the Coca Cola 600. Every other race has had its starting lineup determined via a random draw. With the playoffs approaching, we are normally talking about how important a starting spot is for pit stall selection and track position for stage points at the beginning of a race. Now with the random draw, that is out the door for the moment.

Is it time to go back to qualifying? If not, when is the right time to do so? How can the random draw start affecting the points situation?

This year’s edition of the All-Star Race will feature several new features in the NASCAR Cup Series that we’ve not seen before, such as the choose cone rule, a different number placement and underglow on the cars. NASCAR has experimented a lot in prior All-Star Races, and some of their experiments have led to changes to the some of the rules.

Which of these can you see being a permanent feature in the future? Are we getting a glimpse of the future right now with all these different aspects? What can we expect from the race itself on Wednesday night, July 15?

Q: Even though it has made for unpredictable races, is it time to get rid of the random draw and get back to qualifying for every race? -Bill W., Allentown, PA

A: I wrote about limiting practice and qualifying time in the future in a previous column, and I still believe it could be a thing. However, qualifying needs to happen in this sport. As stated, practice can always be limited, and it should be, but qualifying should not be eliminated for any event.

The random draw was a great thing to have for a few weeks when the sport returned. It was exciting to see which drivers had the luck of the draw and who would have to come from deep in the field with solid cars. Now that we are just about two months into it, the idea has sort of worn off.

If we look at other forms of motorsports that have returned, the NTT IndyCar Series is a great example of this argument. They have had qualifying for their races since they returned back at Texas Motor Speedway last month. NASCAR should start looking to do the same again. They were able to hold it for the Coca-Cola 600, which still stands as the only race to have it since the return.

There are ways they can do it, even if it means qualifying the morning of the race. While it might be a hectic day for teams, with the way things are and wanting to limit the time at the track for each series to only a day, it makes sense right now. They attempted this a few times in the past when things were normal, most recently in 2019 at Indianapolis Motor Speedway prior to the Brickyard 400. In 2017, it happened at Pocono Raceway, Watkins Glen International and even in the playoffs at Martinsville Speedway. Going into the 2020 season, the plan was to qualify the morning of the Brickyard 400 (again), which is why the race was slated to start at 4 p.m. ET.

NASCAR should get back to qualifying very soon. If other racing series can do it, NASCAR can find a way, too. Random draws are great once in a while, but when they happen every week and it seems to be similar results almost always, it gets old. Before anyone says anything about this, of course safety of drivers and teams comes first. If there is not a safe way to do this, then the sanctioning body should not put it into play. I am only saying we should because there seems to be a safe way of making it happen.

Single-car qualifying has been one of the most intriguing things to watch in years past. Part of the fun of race weekend is to see who truly has the fastest, trimmed-out car. We’ve sadly not been able to see that aspect of it since early March at Phoenix Raceway, before the coronavirus shutdown. Hopefully, there is a safe way of doing it, because I think a lot of us are ready to see it come back extremely soon.

Q: Which, if any, of the features and rules in the All-Star Race would you like to see become a full-time aspect of the sport, if successful? -Richard B., Staunton, VA

A: I am almost sure that, without even seeing it put into action yet, the choose cone rule will be the most popular aspect of that race. It’s been a feature on so many short tracks throughout the country and has always been successful.

Matt Weaver of Autoweek has been a big proponent for this rule and has lobbied on his own Twitter page for a long time for NASCAR to bring the rule into effect at a place like Bristol Motor Speedway. Well, they finally listened and announced just two weeks that it would be used for Wednesday night’s race.

If you are not familiar with the rule, it basically allows drivers to pick which lane they want to restart in. While a cone will not actually be put on track during the race on Wednesday night, drivers may choose the inside or outside, regardless of if they are an even or odd position. Hypothetically, let’s say Kyle Busch is leading, Brad Keselowski is second and Jimmie Johnson (who’s probably going to line up behind Keselowski via a tweet sent out after Sunday’s race at Kentucky Speedway) is third; all three can choose their own lane. If one wants the bottom, they can take it. Their position does not truly determine which lane they restart in. Somebody from fifth to sixth could jump up to take the bottom and possibly be the first one to try it.

Not only is it an exciting rule to have, but Bristol is the perfect place to try it out at. For so many years, the bottom lane has been a huge disadvantage on restarts, even with the PJ1 down on the track. Now, drivers will not be forced to start there, but they could choose to do so and take a chance. The rule will allow restarts to be hectic, but it will work.

Many rules have been questionable in the past by NASCAR, but they hit a home run with this add on. No doubt, this will this make the race more exciting than it already was going to be. One of the coolest parts of the whole thing is there will be nearly 30,000 fans at the track to see this unfold. Hopefully, everyone stays safe at the track, but regardless they are going to see one heck of a show.

2020 has the makings to give us the best All-Star Race in the history of the sport. Yes, even better than the “Pass in the Grass” in 1987 or “One Hot Night” in 1992. This is the first time in the race’s illustrious history that it will be held on a short track, arguably, the best track in the sport. Wednesday night is going to be insane, so if you have any plans, cancel them. Watch the race, we are going to be in for a huge treat.

I agree it’s time to have qualifying again. I like the no practice rule, but having quals would at least give the teams achance to ‘shake down’ the car and hopefully avoid any silly errors.

With the exception of the Daytona 500 (or whatever race ends up being first after the schedule realignment), there should be one 1 hour practice (just to get rid of that pesky competition caution every race has now) and then qualifying and that’s it. If they must continue to draw for starting position then all 40 drivers should be eligible for any starting position. I do not like the 1-12, 13-24 and 25-36 tiers that limit who is eligible for the pole.

What makes you think the competition caution TV timeouts will go away if they are able to practice and/or qualify? Nothing the “brain trust” in Daytona has done would make me think that.

I think that it woud be quite feasible to have a one-hour practice session + one-at-a-time qualifying on the morning of each race. Unlike other kinds of cars (e.g. F1 and IndyCar) which can be totally set up via the computer off-site, NASCAR cars rely on getting the car onto the race track with a practice session to get set up properly. Yes, I know that they have been managing without practice but I don’t think it is fair to the teams — especially the smaller ones. As for qualifying, if there is ever a reason for qualifying, that reason still remains. Unless NASCAR continues to apply its standard rules and procedures they are making a mockery of them — i.e. if they were important before, why are they not important now?

Bill B – i agree….the same 12 guys are basically in the front of the field every weekend, unless someone has inspection issues. plus what about the shootout? right now not many are in the shootout for next year. it seems regardless what they do they are always throwing that competition caution in the beginning of the race.

i still cannot believe they’re going to let all those fans in stands at texas with the resurgence of the virus.

Definitely do qualifying, but no touching the car after qualifying. If a team has to change an engine or something, they go to the rear.