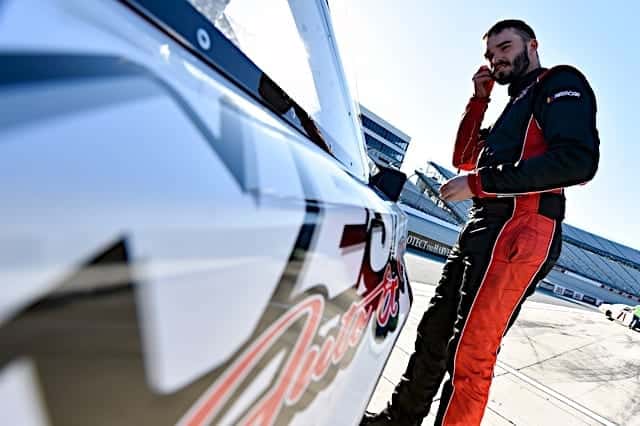 Between racing in the ARCA Menards Series East and in late model stock car races at Langley Speedway in Hampton, Va., and various other nearby short tracks, owner/driver Justin Carroll already has a pretty full schedule.

He’s about to add even more to it in the way of the main ARCA Menards Series and the Gander RV & Outdoors Truck Series.

“We kind of just decided to do it,” Carroll recently told Frontstretch. “Any other short tracks that possibly come up on the schedule when we have an off-weekend, we’ll probably think about doing those as well. It kind of popped up. My dad [Terry Carroll] saw it on the schedule, and we decided to go for it.”

The Williamsburg, Va., native noted that racing in the main ARCA series wasn’t too different than being in East, as he is still competing against top ARCA contenders Ty Gibbs, Sam Mayer and the Venturini Motorsports cars in the East.

For the time being, Carroll will focus on the series’ short track races, but he is working to get in a situation to run the bigger tracks as well.

“I don’t have an Illmor [engine] yet, which is what you need to run the bigger tracks, anything bigger than a mile,” Carroll said. “I got a guy I’m working with to get in a car I can take to a mile-and-a-half [tracks] or bigger.”

What might be most impressive about Carroll’s ARCA effort is who he has calling the shots on top of the pit box. His family team recently signed former NASCAR Cup Series crew chief Jim Long to be the crew chief for Carroll’s No. 91. Long won three races at the Cup level, including the 1997 Brickyard 400 with Ricky Rudd and the 2003 Southern 500 for Terry Labonte’s last win.

Long was most recently Travis Braden’s crew chief but became available when RFMS Racing shut down at the end of last year. A few crew guys on Carroll’s East team referred Long, and Carroll and his father Terry immediately hit it off with him.

“He’s just a real down to earth guy for someone who worked at Hendrick [Motorsports] for 12-15 years and worked in the Cup Series and all,” Carroll said. “He knows if we can save $50, we need to save $50. It’s hard to come by in the crew chief world.

“[…] Jim, we kind of stumbled across him, and he’s a really nice guy. And he’s helped me a lot. He’s taught me a lot. He’s really kind of came in the picture, and it’s almost like I’ve known him for 10 years. It kind of clicked.”

But that isn’t the only recent development in Carroll’s racing career. His family team recently purchased a truck with the intention of entering the Truck Series either later this season or early next season.

“We’re not sure when we’re going to race it yet,” Carroll said. “We’ve got a couple updates to do to it. But we are going to try to get our feet wet a little bit in the Truck Series hopefully by the end of this year. But with everything going on, it might be the beginning of next year. That is in the works.”

It might seem a little ambitious for a driver to buy a truck after only 14 combined starts in ARCA and ARCA East, with one top-five finish and eight top 10s. But from a business perspective, it’s a move the Carrolls had to make.

So while Carroll works to get the truck race-ready, he noted he’ll “finish out the year” in ARCA East and late models while making spot starts in ARCA.

“[ARCA’s] a real good series to get your feet wet and learn the bigger tracks and this, that and the other, which I still need to learn more,” Carroll said. “But we’re to the point now where really we need to build a new ARCA car to move forward and be more competitive. … I honestly don’t know [if] it’s worth doing. I’d rather spend that money in the Trucks.”

The most recent ARCA East race at Toledo Speedway rewarded the winner with $5,000. Carroll, who finished sixth, made $1,500 off his finish. That amount doesn’t cover the tire bill, let alone allow for the team to make money off of the race. In comparison, the late model race Carroll is competing in this weekend at Langley Speedway, the Hampton Heat, pays $10,000 to its winner and will likely have twice as many cars in the field for the purse to pay.

“[…] It’s a good series, and I don’t think I’ll get out of it. But I just think it’s a lot more economical to run the Truck Series. I mean it’s a little bit more cost up front for each race, but it’s a lot more payout. It just makes more sense. Plus, every event is live televised. It should be easier to get a little bit of sponsorship.

Carroll’s No. 91 currently races with Carroll’s Automotive on the hood, as he is sponsorless and that is the name of his family’s automotive shop that he works in to pay for his racing.

“We do it out of our own pockets,” Carroll said. “I work on the car, I drive the 18-wheeler to the track. We do everything. So I have a lot more respect for the stuff. We work hard to pay to race. That’s our passion. My dad’s always done it. That’s how I was raised.”

Carroll’s father, Terry, races against his son in late models, but at 62 years old, he has gradually shifted his focus from his own driving career to his son’s.

“He never really gave me anything,” Carroll said. “My first racecar, he told me I needed to save my money to get one. Now, he helps me with the ARCA stuff and all.”

That work-to-race philosophy is part of why the Carrolls have gone about owning and working on their racecars, when it would be much easier to rent a competitive ride like many other ARCA competitors have done.

“We own all our stuff just because it’s cheaper,” Carroll said. “Obviously, it’s easier just to go hop in a top-notch car. But just to run a regular ARCA race, you’re going to spend, I’ve heard, $35,000-75,000 to rent a car. I’d rather struggle a little bit and do it myself and own the stuff. That way at the end of the night, I’ll walk away with more than just a helmet.”