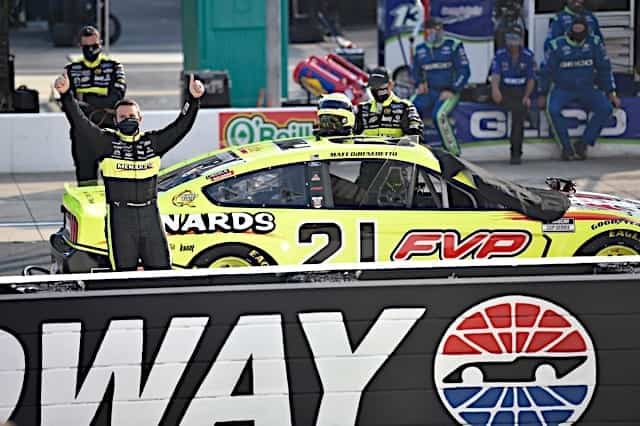 Though the sun was still shining, tempers were still hot during the All-Star Open at Bristol Motor Speedway Wednesday evening (July 15).

By the end of the night, four drivers moved on to the main event: Aric Almirola, William Byron, Matt DiBenedetto and Fan Vote winner Clint Bowyer.

Instead of matching his successful run in last year’s All-Star events at Charlotte Motor Speedway, Bubba Wallace exited early from the Open. With 17 laps to go in the first segment, Wallace and Byron were on the inside of Michael McDowell when McDowell came down and turned Wallace. Unfortunately, Wallace’s No. 43 car was too damaged to continue, and his night was done.

Our first caution of the night is out in the All-Star Open at @BMSupdates. pic.twitter.com/W8OoykuuFs

Wallace’s team then left part of his car on McDowell’s hauler.

Wallace was a favorite to win the Fan Vote but needed to use the same car in the All-Star Race, so Bowyer was the next driver in line, outside of the stage winners.

Almirola easily won the opening stage, and drivers made their pit stops under the stage break.

In the second stage, there was one caution for two synchronized spinners. McDowell slid up into Ryan Preece who spun and sent John Hunter Nemechek around as well. Fortunately Nemechek and Preece avoided further contact from other drivers and continued on.

Byron then took the lead over Matt DiBenedetto and won stage two, securing his spot in the All-Star Race.

The final stage went caution free as DiBenedetto led all 15 laps to win the Open.

The new choose rule was in effect for the Open, and will also run in the main event. Drivers decided which lane they wanted to be in by going to the left or right of an orange V on the track.

The Choose Rule is here. ?