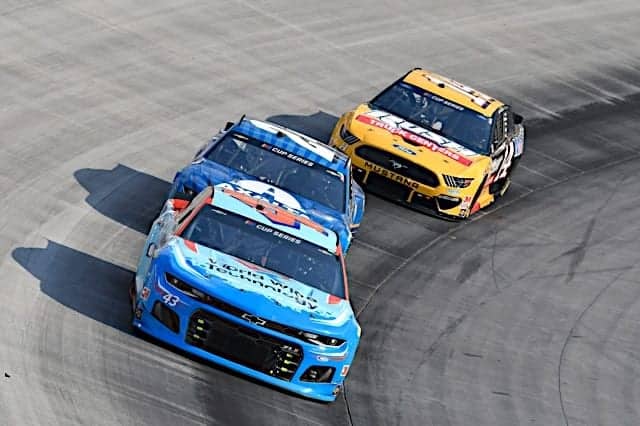 It didn’t take long for tempers to flare and paint to be traded on All-Star night at Bristol Motor Speedway.

On Lap 17, Michael McDowell turned left and sent Bubba Wallace‘s No. 43 Chevrolet hard into the outside wall. McDowell himself then spun across the nose of William Byron.

McDowell drew the pole for the race-in event, leading for a short time before he began to fall back. While racing hard with Wallace and William Byron, Wallace moved McDowell. McDowell took issue with the bump, turning Wallace driver’s-side into the outside wall.

“Just disrespect,” Wallace said in an interview. “…When you get hooked [in the] right rear into the wall, it’s… I don’t even need to see a replay. Look at that sh…. yeah, wow. People say [he’s] one of the nicest guys in the garage, can’t wait for the God-fearing text that he’s going to send me about preaching and praising respect. What a joke he is.”

McDowell returned to the track with minor damage, but Wallace’s hopes of making the All-Star Race were dashed with a destroyed car.

Wallace then took his damaged back bumper and dropped it at McDowell’s trailer, further expressing his frustration.

.@BubbaWallace took the bumper of his wrecked #43 car and dropped it a the hauler door of @Mc_Driver.

Not a happy driver.

It appeared that all was not well between the teams later on in the race, too.

Keep an eye on the 43 and 34 teams after this race. Seen several 43 team crew members continuing to walk by the 34 hauler every few minutes. Could get interesting. Maybe not though. #NASCAR

As for the event itself, Aric Almirola, Byron and Matt DiBenedetto won Stages 1, 2 and 3, respectively. Clint Bowyer advanced to the main event by virtue of the fan vote.

Neither Wallace nor McDowell advanced to the 2020 All-Star Race.

No competitor in any sport can demand respect. It must be earned. Neither driver is anywhere near an “All Star” in my opinion. Instead of huffing and puffing one driver should just work harder to improve. He has way too high an opinion of himself. No class. McDowell should have been interviewed though.for his perspective.

The 34 car had a car in his left quarter first that turned him. The rest was accidental! Bubba needs to race and stop campaigning! Big cry baby!

I watched the replay a bunch of times and thought the same thing as you. Interesting that no one mentions that part. Probably because it won’t fit.

Tom B
Reply to  STEVE

I agree Steve.
Joy and Gordon were very one sided on their description of the incident. And they show Bubba getting the Byrnsie Award. He followed up with a no class act of dumping his bumper at McDowell’s hauler. Enough already. How come McDowell wasn’t charged with a hate crime? Sarcasm

What would Cale , Bobby , Donnie , Think of this Candy ass

Amen, Roger! Having read numerous publications’ reports on this incident, I have determined almost all media outlets seek to promote a perspective/agenda. NO account I have read offers Michael McDowell’s reaction/perspective/explanation. None even notes that the publication sought his comment, which would have included a sentence to the effect: “Michael McDowell could not be reached for comment.”
ANY legitimate “journalist” knows that 001 demands a good-faith attempt to provide perspective from both parties when writing about any controversy. Only then would readers have a full perspective and able to make a genuine judgment regarding the incident. Does it appear McDowell turned? Yes, but did his spotter give him bad information, or could another reason account for his actions?
Wallace’s post-incident actions trouble me more than his comments, which evidence arrogance and a self-righteous attitude. Could/Should/Has any other driver brought a piece of damaged car to the other driver’s trailer? Wallace faced no repercussions from his throwing water in Alex Bowman’s(?) face last year. He knows has clout, but he continues to spend his capital in a profligate manner.
As each week passes, I realize why I watch NASCAR with less interest. Instead, I remain focused on modifieds, both NASCAR and regional series.

Must of missed the drone cam where Jeff Gordon was saying the same as you until, they showed that angle and Gordon laughingly said he turned him with no help from any other driver…and the car behind McDowell, said he done right turned him, instead of showing your racism so metaphorically, maybe take a look at all the views not just the one that agrees with your opinion…Maybe McDowell should have not been such a hot head right wing racist christian…

Roger…..that was probably the best way to put that….you win the internet for today….lol

Bubba whining about being a midpacker and being crashed out by another mid packer and then questioning the mans Christianity? Isn’t that being a little racist Bubba? Thought so. Wallace had no chance to win the qualifying race or the all star. He is not an all star and his place in the standings points that fact to everyone that knows anything about racing. The only way that Wallace would have gotten into the all star was by a fan pity vote. Bubba’s 15 minutes is wearing perilously thin, but then he is a victim, and not a driver.

I agree about his disparaging McDowell’s faith. That was a classless and hypocritical move, because last I saw, Wallace had his head bowed and eyes closed – apparently praying – during the invocation. Also, Wallace was on Sirius/XM two days ago and stated unabashedly how much he was going to use his bumper to make up places only to whine when somebody did it to him. Lastly, I did have to chuckle how the media anointed him as the fan vote winner for days before the race only to have Boyer actually take it. And no, Boyer didn’t only win the fan vote because Wallace crashed out in the Open. Kelly Crandall made it clear on Racer.com that Boyer was the overall fan vote winner.

More like Nascar President Steve Phelps can’t gave his “Divisive Puppet” on the sidelines. He’s a Liberal, who believes it is his calling to fix Nascar, like he claims he did for the NFL in his last job. I believe he fabricated a lot of this mess the last couple of months, and after the way he handled the racist “NOT” incident, I began looking into his background, and it’s fairly interesting, IMO. Not that Darrell, Jr. isn’t already a “Drama Queen” and has embraced his annointing as BLM’s Poster Boy in their fight against stock car “White Privelege”. But what if any other driver had left car parts in front of HIS trailer? Mr. Phelps would already have the FBI in Bristol. Please google what College Steve Phelps attended, and look at the school’s site under the column of, You shouldn’t attend this school if you…, and look up what school his Mother is a Professor at. Has anyone else wondered why we rarely see former Nascar Stars at races. Maybe those guys have seen this stuff coming, and don’t care to take part. I just don’t believe this sport is in desperate need of the type of makeover Phelps gave the NFL. Oh, and I will blow a gasket, if there is an unexpected change this year, in how the “Most Popular Driver” is decided. While writing this, I just saw where Bubba just won the Byrnesie award. I rest my case!

i think bubba is a cry baby .. only way to stay in the plubics eyes especially when u cant finish a race in front .. all this stuff has to stop or nascar is gonna lose what they have left .. letting black lifes matter onto car was overboard. Its is just as racist its not equal .. nascar wake up itll be one thing after another week after week if they let bubba act like someone owes him .. just climb in car an race.. he rubbed on 34 for 2 laps he got the hook .. its racing .But since we’re trying to relive history this wreck will be a big highlight with probably more to follow..

McDowell did just what a lot of guys want to do.

Bubba is another driver who is a legend in his own mind. He’s got his speech ready for his HOF inducement.

Bubba’s victim story is wearing thin. like was said before, middle packer complaining about a middle packer. Maybe work on getting better.

Nascar is going to kiss his ass because that’s what they did with another former driver who had zero talent. . That driver was promoted heavily because that driver did not have a penis. This driver is being promoted because he isn’t white. Bubba and Danica should get together for drinks and a few laughs at Nascar’s expense.

I guess the other driver shouldn’t be referred to as cocky.

It seems she is suddenly available since Rodgers found a younger woman.. I wish Stenhouse would reveal more about his flat chested EX!!! Rotflmao!!!

I agree, Bubba is a midpack driver and his time of being relevant is about over.
But did you notice last night in the NASCAR tv promos he is being featured a lot more and they make him look like a big name driver and race winner. I use to respect him for his determination but now he is using the media to advance his brand.

I thought it was ironic that he was probably going to be voted the most popular driver and be able to advance to the All Star Race but since his car was junk he could not move on. So he had to make a statement with the bumper drop off at McDowell’s hauler to remain in the news. Just man up and drive!

I agree with you all. The victim thing is real thin. Certainly tired of hearing it. Hope McDowell took the bumper back to bubba to get it signed.

Welp, bump a guy at bristol and not gap him after you do? Who’s fault is that? Lets not even mention byron tagging Mcdowell. Get outta his way he’s Bubba freakin Wallace you know.