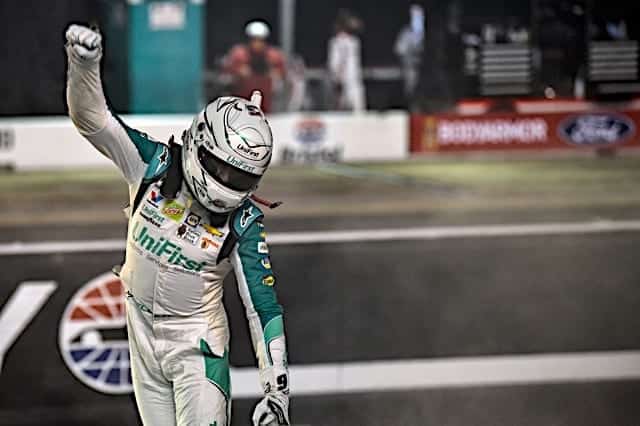 It was a tame race compared to the All-Star Open, but for Chase Elliott, it was the biggest night of his life.

Elliott took the lead over Kevin Harvick in stage two and held off a determined Kyle Busch to win the All-Star Race at Bristol Motor Speedway and the $1 million prize.

“I can’t believe it. What a better night to have fans back than tonight,” Elliott said to FOX Sports after the race. “There’s nothing like Bristol, there’s nothing like the lights here, there’s nothing like racing here. Never won here, what a race to do it. Really proud of our team tonight and rebound, we’ve had a really tough couple of weeks. Just felt like we had kind of gotten off base and I felt like I was struggling. Just tried to hit the reset button this week and came out and put on a great performance. Great car, can’t thank all our partners — everyone who makes this happen — enough, and all those No. 9 hats and t-shirts in the stands, love to see it.”

You're right about that, @chaseelliott. ? pic.twitter.com/kW6zbqI1Hp

Besides the new venue, there were other new features in the event. The cars already locked into the race had underglow lights at the rear with colors corresponding their manufacturers: Chevrolets had an amber color, Fords were blue and Toyotas were red. Additionally, the paint schemes were a bit different, as the numbers on the sides of the car were moved toward the rear tires. Finally, there was a new choose rule for restarts, where a driver needed to pick which lane he wanted to go in. Those who wanted the bottom lane went to the left of the orange V on the track, while those choosing the top lane moved to the right of that mark.

Though Martin Truex Jr. had won the pole, he had to drop to the back after failing pre-race inspection twice. Truex was never a factor for the lead after that. Alex Bowman led at the start, but the quick No. 12 car of Ryan Blaney took the lead on lap eight. Then, the caution flag waved after contact from Keselowski caused Kurt Busch to spin. Busch’s No. 1 Chip Ganassi Racing car had a wrinkled left-rear quarter panel as a result of the incident.

After the ensuing restart, Matt DiBenedetto’s No. 21 Wood Brothers Racing Ford slid up and hit the wall, but he regained control and continued on. There weren’t any more cautions for incidents in this opening stage, and Blaney won stage one.

STAGE WINNER: @Blaney starts strong at @BMSupdates and wins the opening stage of the #AllStarRace! pic.twitter.com/3YeGRhKsJA

However, Harvick and Elliott beat Blaney off pit road under the stage break and took control of the race lead. Right after the race restarted, the yellow flag was out again for Ryan Newman, who got loose and spun on the frontstretch. Newman just barely scuffed the inside wall, so he was also able to keep racing.

Then on the restart, Harvick appeared to not fire off well, and Elliott easily got around him for the lead. While those behind him jockeyed for positions, Elliott held on to win the second stage.

Pit strategies varied under this stage break; Blaney was the lone driver to stay out, while Keselowski took two tires to lead the race off pit road. DiBenedetto also took two tires but lost some track position in stage three.

Though Blaney held the top spot on the restart for about 20 laps, Elliott made his move from third place. He passed the two Team Penske teammates and went on to win stage three.

Then, on the final restart, Elliott took to the lead while Kyle Busch moved into second. Busch tried his best to get close to Elliott’s rear bumper in the final 10 laps, but could not do it and had to settle for second place.

I THINK NASCAR HAS MANAGED TO CREATE RACES THAT CAN ONLY BE WON WHEN YOU HAVE ” CLEAN AIR”, NO MATTER WHAT SIZE TRACK YOU ARE ON. FOR A TRACK THE SIZE OF BRISTOL, THE ACTUAL RACING LAPS WERE PAINFULLY SHORT, ESPECIALLY IN THE OPEN. FOR ALL THE BLUSTER ABOUT ” WRECKING YOUR MOTHER”, THIS WAS ANOTHER SNOOZER. IT WAS ALSO OBVIOUS THAT THE ONLY PREVIOUS WINNER OF THE ALL-STAR RACE NOT TO BE MENTIONED DURING THE BROADCAST WAS LAST YEARS WINNER, KYLE LARSON, WHO IN THE LAST TWO MONTHS HAS PUT ON A CLINIC IN DOMINATING THE VARIOUS DIRT TRACK SERIES !!

“ANOTHER SNOOZER” And how!
• How many passes did we see during actual racing? Almost none.
• If the ‘choose your lane’ innovation was so great, why did they we hear mention of this only in passing twice during the race. As something that was supposed to add ‘sizzle’ to the race, it was dud!

Was going to wait for the TV critique for this post, but you second bullet point makes me want to comment.

How do you beat the “choose cone” to death from the beginning of the broadcast and then never show it live the first time they do it? Seriously? Did we get show it live at all last night? I saw a replay but that was it. Did I miss it?

But that didn’t even compare to the mess they made with the Wallace crash live. What the hell was that? You knew something was going to happen, and what do they do, go to the bumper cam of course because they can’t help themselves. Pretty awful broadcast by FOX last night

Great win for Chase and crew. Now onto the Championship Chase

They should go back to the format used in the late 80’s: 75/50/10, mandatory green-flag pit-stop in the first stage. Lately, they’ve all been pretty lackluster races, if you ask me…

I suggest if they race at Bristol again for the All-Star event go way back to the original format. A 50, make it 100 lap race with out stages on this short track.