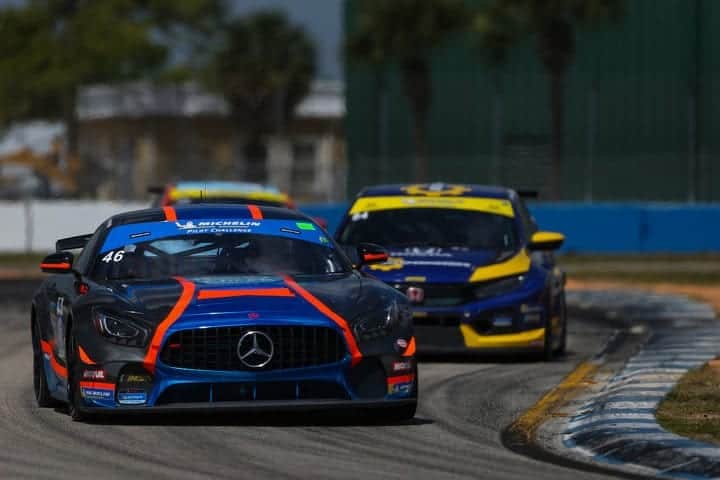 This weekend, IMSA Michelin Pilot Challenge teams will be back in action at Sebring International Raceway for the first sprint race of the season, the Advent Health 120.  35 teams are entered to race on the bumpy 3.74-mile road course, down significantly from the 51 that raced in Daytona back in January.  However, a number of those teams were originally planned to be part-time operations.

In the Grand Sport class, there will be 22 cars duking it out.  However, it is likely who is not entered that has made more news.

On Wednesday (July 15), Team TGM (last year’s No. 46 Mercedes pictured above) announced that they have withdrawn from the remainder of the 2020 season due to COVID-19.  However, it is not due to team members contracting the virus.  Instead, team owner/driver Ted Giovanis has withdrawn the team in order to focus on trying to find a vaccine for the virus.

Team TGM is an ardent supporter of the Jayne Koskinas Ted Giovanis Foundation (for Health and Policy – JKTGF) and the Foundation is leveraging its resources and knowledge into better understanding the COVID-19 virus.

The JKTGF logos have been a regular feature on Team TGM’s entries in recent years.  The team will be missed, but may be back once the COVID-19 pandemic is under something resembling control.

As previously announced, PFAFF Motorsports will not be competing.  The team is Toronto-based and cannot enter the United States with their equipment due to the U.S-Canada land border being closed.  That move affects both their WeatherTech program (which they still hope to compete with in the Michelin Endurance Cup events, assuming the border opens soon enough) and the Michelin Pilot Challenge McLaren team.

Motorsports In Action, a St. Eustache, Quebec-based team, is entered this weekend with their McLaren 570S GT4 after missing Daytona.  That was due to the fact that they failed to look for drivers because their plan was to return with Jesse Lazare and Corey Fergus in order to finally win the championship.

“We really didn’t put ourselves out there as a racing team looking for drivers at the end of 2019,” team owner Eric Kerub said in March in a press release.  “We focused too much on fielding the same lineup with ‘unfinished business’ in mind and when it didn’t happen, we had no Plan B.”

Shortly before the shutdown, they announced a new driver pairing in Sheena Monk and Corey Lewis with primary sponsorship from J.G. Wentworth.  Given the current border closure, the team has acquired a base in the United States in order to continue racing in the series.  The team will switch from No. 69 to No. 3 as well.  Monk and Lewis drove together using the No. 3 for M1 Racing LLC at Daytona, finishing a lap down in 18th.

Additional changes include Alec Udell joining Winward Racing’s No. 57 team in place of Philip Ellis.  Multimatic Motorsports is fielding only one car this weekend with Sebastian Priaulx sharing the No. 22 Ford Mustang GT4 with Scott Maxwell.  Finally, CarBahn Motorsports with Peregrine Racing is breaking out their second car for Tom Dyer and Mark Siegel.

In TCR, there are 13 cars that are entered.  Bryan Herta Autosport has expanded to four cars with the addition of the No. 29 Hyundai Veloster N TCR.  Parker Chase, most recently of AVS Vasser Sullivan, will drive alongside Spencer Brockman.

Taylor Hagler is still entered in LA Honda World Racing’s No. 77 Honda Civic Type-R TCR on the available list, but Hagler announced Wednesday that she has tested positive for COVID-19.  As a result, Hagler will sit out this weekend.  Hagler will be replaced by Dakota Dickerson, a driver who has shown a lot of potential in series such as Pirelli GT4 America in the past.

Teams that are not entered include part-time operations from Team Premat and the second entry (No. 74) from Forty7 Motorsports.  Atlanta Speedwerks and Honda of America Racing Team (HART) have also not entered their Civic Type-R TCRs.

The Advent Health 120 is due to start at 2:30 p.m. Friday afternoon.  The race will be streamed live on NBC Sports’ TrackPass service.  Tape-delayed coverage of the event will air at a later date on NBCSN.