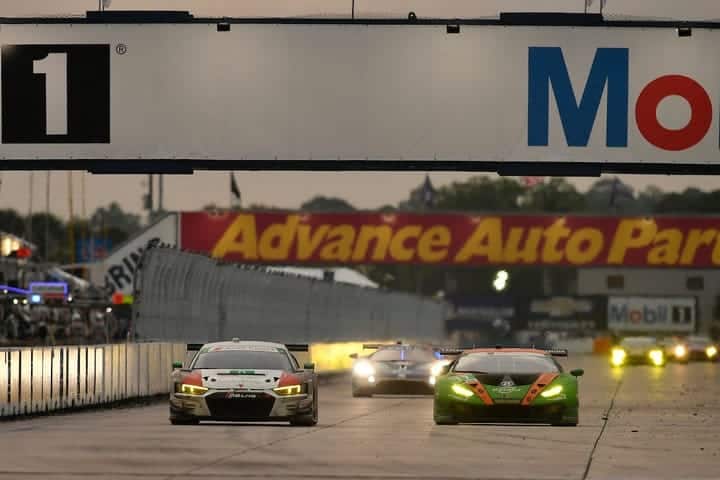 This weekend, the IMSA WeatherTech SportsCar Championship returns to action with the first sprint race at Sebring International Raceway for a top-flight sports car series since 1998.  On Saturday, 29 cars will take the green flag.

In the Prototype class, there will be eight cars on the grid.  There is one change of note on the entry list as compared to Daytona.  Felipe Nasr is back on the entry list in Action Express Racing’s Whelen-sponsored No. 31 Cadillac.  Nasr was forced to miss the WeatherTech 240 at Daytona due to testing positive for COVID-19.  Since then, Nasr has remained back in Miami and has quarantined himself.

The LMP2 class returns after skipping Daytona two weeks ago.  The same five teams that competed in the Rolex 24 at Daytona in January will be back in action, but with some changes.  Currently, the entry list includes Simon Trummer in the PR1 Mathiasen Motorsports No. 52.  However, Trummer is also scheduled to compete in the European Le Mans Series season opener, the 4 Hours of Le Castellet, on Sunday.  It is impossible to run both races, with or without COVID-19, due to the fact that IMSA race ends less than nine hours before the start of the ELMS race.  Sebring is also more than 100 miles by car from the nearest airport with flights to Europe.

At DragonSpeed, Henrik Hedman will be joined by Gustavo Menezes, who is full-time in the FIA World Endurance Championship for Rebellion Racing.  Menezes is in the No. 81 since Ben Hanley is competing at Paul Ricard this weekend.

There will be six GT Le Mans entries, two each for Chevrolet (Corvette Racing), BMW (BMW Team RLL) and Porsche (Porsche GT Team).  There are no changes in the driver lineups from Daytona.

Saturday’s race officially will not count towards the full season GT Daytona class championship.  It will only be for points in the WeatherTech Sprint Cup.  As a result, Meyer Shank Racing with Curb-Agajanian will not be there with their two Acuras (both the No. 86 and the Heinricher Racing No. 57).

As a result, there are only 10 cars entered in the class.  Of those 10, they are all running the same drivers that were entered at Daytona two weeks ago.

The Cadillac Grand Prix of Sebring is scheduled to go green just after 5:30 p.m. Saturday.  The race will air live on NBCSN, immediately after the Xfinity Series My Bariatric Solutions 300 from Texas Motor Speedway.