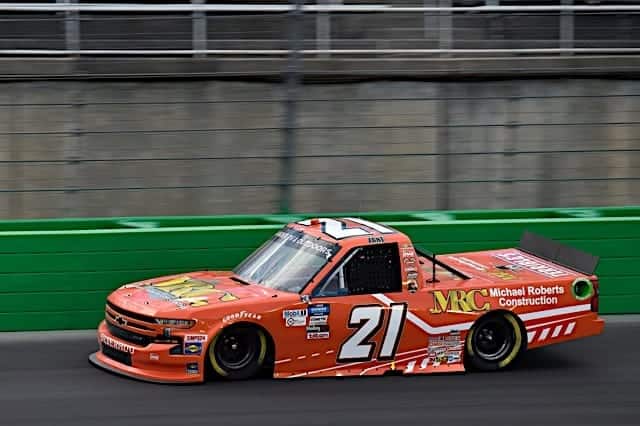 Sheldon Creed‘s victory in the rain-shortened Buckle Up in Your Truck 225 at Kentucky Speedway was his first win in the NASCAR Gander RV & Outdoors Truck Series. He joined Brandon Jones, who won at Pocono Raceway, as the two first-time winners this Truck Series season. After seven races in 2020, Creed and Grant Enfinger are the only two full-time series regulars who have been victorious. Which other drivers are poised to become first-time winners this season?

Rookie Zane Smith has two top fives and four top 10s in seven races. He has led laps in four races. With the randomized draw based on owners’ points, Smith has started inside the top 10 in four straight races. He is currently sixth in the championship standings and has one stage win under his belt.

Despite no practice or qualifying sessions, Smith has been strong driving the No. 21 GMS Racing Chevrolet. Part of his quick transition into racing full-time for the first time since 2018 are his teammates, former champion Brett Moffitt, Tyler Ankrum – who made the playoffs last season – and Creed. Splitting driving duties of the No. 24 Chevrolet are Chase Elliott, Chase Purdy, Sam Mayer, David Gravel, and at Texas Motor Speedway, Justin Haley. Smith races for the top Chevrolet Truck Series team.

Smith also has his own experience to rely on. He made 10 NASCAR Xfinity Series starts last year driving for JR Motorsports. He only led five laps, but he notched two top fives and seven top 10s. Moreover, his worst finish came at Las Vegas Motor Speedway when he finished 24th after a crash ended his race early.

There is a Truck Series doubleheader upcoming at Kansas Speedway. After winning the pole for the ARCA Menards Series race there in 2017, Smith finished in third place. With his GMS Racing teammates, his experience and his solid starting spots, Smith will have a terrific opportunity to join Creed as first-time winners this season with GMS Racing.

After winning the ARCA championship last year, Christian Eckes finds himself fourth in the championship standings. Although this is his first full-time season in the Truck Series, he made 12 starts in the series in 2018 and 2019.

In 19 career starts, he has finished inside the top 10 in over half of them (10). He has led at least 10 laps in four different races. At Pocono Raceway, Eckes led 10 laps but wrecked while in the lead.

Because his No. 18 Kyle Busch Motorsports Toyota is in fifth in the owners’ points, Eckes will start no worse than 10th in the upcoming race at Texas. His solid races result in good starting positions for him as well.

Eckes drives for Kyle Busch, the reigning Cup Series champion and winningest Truck Series driver. Can he teach Eckes enough to get the rookie into the playoffs, something neither KBM driver achieved last season?

Chandler Smith has been dominant in ARCA, winning nine of his 23 career starts. He just turned 18 and made his debut on a 1.5-mile track at Kentucky Speedway. He finished 22nd after starting 10th.

In an ARCA Zoom call on Wednesday (July 15), Smith said he did not know his racing schedule. He would go where the boss man told him. Now that he is 18 years old, he can compete at every track on the circuit.

To earn his first Truck Series victory, Smith stated the three virtues he needs are, “consistency, studying and confidence.” He noted the trucks are more aero-dependent and that racing around people in the air is more difficult.

“Part of it is learning,” he said, accepting responsibility for his finish at Kentucky. “It was poor preparation by me. I’ll learn to do better.”

Eckes’ team owner Busch will make his fifth, thus last, start of this season at Texas. Smith was originally slated to compete in eight races this season. The team has not announced whether he will compete in any additional races due to the revised schedule. Nevertheless, Smith has proven he can wheel a race car in ARCA; I expect him to do likewise in the Truck Series.

This list, unsurprisingly, has Truck Series newcomers. Of all the listed drivers, Ty Majeski is the one who has struggled the most without practice or qualifying sessions. Why? The lack of a regular teammate has affected Majeski. His teammates have included Natalie Decker, Ross Chastain, Ryan Truex and Garrett Smithley.

He also lacks experience, having made only one Truck Series start before this season. Majeski is quite a wheelman in late models, though. He also won three ARCA races and accrued six top 10s in six starts last year. He is undoubtedly talented.

The 25-year-old Majeski is in 16th place in the championship standings. Although he has not replicated Chastain’s performance from last season, Majeski has shown promise. He has only suffered two DNFs. He only has one other race where he did not finish on the lead lap. So, he has been consistent this season.

What does Majeski need to win, then? First, some good luck. Without Busch entered in any more races after Texas, there will be opportunities for Majeski to grab stage points and shine. If his crew chief Phil Gould executes some good pit strategy, Majeski could surprise with a good finish.

Majeski drives the No. 45 Niece Motorsports Chevrolet, which made the Championship 4 last season. He is inexperienced, but given more seat time, especially if NASCAR resumes practice and qualifying sessions, he should have an opportunity to go to victory lane this season.