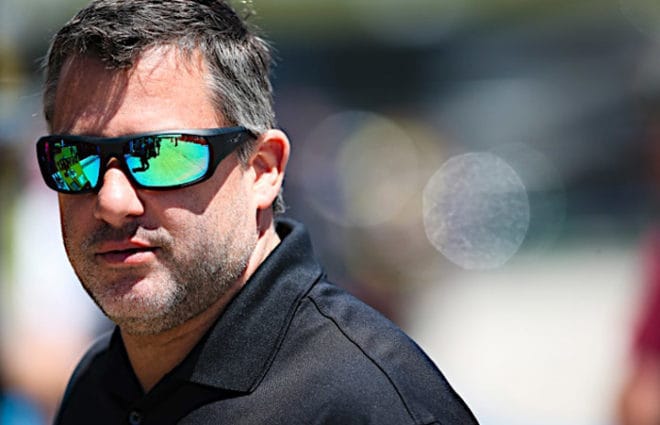 Fire on Fridays: SRX Is the Competition NASCAR Needs

Competition breeds excellence, and that is precisely what could happen to NASCAR given the birth of a new racing league: Superstar Racing Experience.

On Monday morning (July 16), Sports Business Journal reported that NASCAR Hall of Famers Tony Stewart and Ray Evernham are developing their own racing league. SRX will debut on CBS summer 2021 with six races, reportedly on short or dirt tracks, and 12 elite drivers from different disciplines.

Not much has been announced about the league yet, but the SRX Twitter account went on a following spree of select drivers and tracks that can perhaps fill in some blanks.

SBJ reported that “Stewart says that SRX is not meant to compete with NASCAR and is supposed to be an additive, new take on motorsports.”

But of course Stewart would say that. He owns teams in NASCAR; he owns Eldora Speedway, which hosts a Gander RV & Outdoors Truck Series race; and he flirted with racing in the Xfinity Series earlier this year. If Stewart says he’s making a competitor to go against NASCAR, then he could get the treatment of Curtis Turner, who was banned from NASCAR when he tried to unionize drivers.

But I’ve got to call a spade a spade. NASCAR doesn’t own the SRX, and it will air on a different network than NASCAR. Therefore, it is competition. Plus, don’t you think deep down CBS wants to get payback on NASCAR for fleeing to FOX and NBC after the 2000 season? After all, it was CBS that helped make NASCAR popular by being the first to televise the Daytona 500 flag to flag back in 1979.

SRX and its measly six-race schedule aren’t going to come in and dethrone NASCAR as the No. 1 form of motorsports in the U.S. anytime soon. But it’s more so the potential and ideology behind the the Stewart-Evernham brainchild that could have major implications for NASCAR.

If this series is done right, and it has thrilling shootouts between the best drivers in the world in equally matched cars at the most exciting tracks in the country, then it will immediately expose three of NASCAR’s biggest flaws: the racing, the lack of unique tracks and no outside drivers.

The Racing, or Lack Thereof

The NASCAR Cup Series’ racing package was terrible in 2017, when Brad Keselowski noted the cars couldn’t stay side-by-side through the corner. Then in 2019, the governing body introduced the high-downforce, low-horsepower package that remains today, and it makes 2017 look like the good old days.

This year, Charlotte Motor Speedway and Kentucky Speedway have put on some of the worst Cup races I’ve ever seen. They were bailed out by late cautions that produced great finishes, but I don’t watch racing for 397-plus miles of boredom for an exciting last two laps.

Then the All-Star Race was moved from Charlotte to Bristol Motor Speedway, which many expected to be more exciting. And it was more exciting to an extent, but aero push was still a major problem, and no one had anything for the leader on equal tires.

No matter how bad the racing gets, NASCAR leadership stays in denial, goes by fan surveys that are worded to get the answers they desire and pumps up stats to show how much passing is going on.

Plus, the competition gap in NASCAR is as great as it’s been since perhaps the 1970s. NASCAR has always had different tiers of teams, but there was a span where the mid-tier teams used to win a couple times a year, and the small teams would jump up and win every now and again. So far this year, the four major teams have combined to win all 17 races. Cole Custer winning at Kentucky was considered an upset, but he’s driving the same equipment with which Kevin Harvick is leading the point standings.

If Evernham, who is building all the racecars, can build evenly matched cars that aren’t as aero dependent as in NASCAR, we could see some close racing throughout the SRX events. There might even be a multitude of different winners instead of a Big 3 like we have to have every single year in NASCAR.

But if SRX’s racing sucks out the gate, hopefully Evernham will actually take responsibility and work to make it better instead of making excuses.

The Cup Series has not added a short track to its schedule since 1971 (Phoenix Raceway is not a short track). That season, Cup had 25 races on tracks under a mile. The following season had nine short track races among five tracks. Since then, North Wilkesboro Speedway and Fairgrounds Speedway in Nashville have been weeded out so that the current schedule only has six short track races.

In at least the past decade, probably longer, some fans have been begging NASCAR to add more short tracks to the schedule. Yet the most recent schedule changes have been moving races from the mile-long New Hampshire Motor Speedway and Dover International Speedway to the even bigger Las Vegas Motor Speedway and Nashville Superspeedway. NASCAR did also move the fall Charlotte race from the oval to the ROVAL, and that was a positive move, but alas, no short tracks have been added.

After this many years of pleading, fans have to assume ISC and SMI have zero intention of ever adding another short track to the schedule. And NASCAR has zero intention of moving any race dates away from those organizations. Yeah, NASCAR says it’s trying to make more short tracks happen and flaunted a return to the Fairgrounds, but actions speak louder than words.

If a roofer tells you year after year he’s going to fix the hole in your roof, yet you’re still watching water pour in every time it rains, eventually you have to realize that you need to hire someone else to fix your roof. SRX might be that other roofer.

Evernham came right out the gate saying they were looking to race at “historic, shorter tracks.” So NASCAR can’t add a single short track race, but SRX might be about to roll out six of them. And one of the tracks they’ve been rumored to have their eye on is the Fairgrounds. How ironic would it be if NASCAR failed to land an event at that track and then SRX pulls off an outstanding race there?

A track that SRX is probably going to race at is Eldora, which Stewart owns. So its inaugural schedule will more than likely mix it up by having at least one dirt track on it. Cup, meanwhile, has refused to race on dirt since Richard Petty won at the North Carolina State Fairgrounds in Raleigh, N.C., on Sept. 30, 1970.

So SRX seems to intentionally be trying to take what NASCAR would do and go in the opposite direction. Obviously it’s easier for a smaller series like SRX to schedule races at smaller tracks than it is for NASCAR. But that’s just proof that NASCAR got too big for its britches and started sacrificing entertainment for luxury.

One of the things that really legitimized NASCAR in its first couple decades was having accomplished drivers such as Mario Andretti, AJ Foyt and Dan Gurney come take swings at it. There was another surge of this in the late 2000s and early 2010s, when Juan Pablo Montoya, Danica Patrick, Dario Franchitti, Sam Hornish Jr. and Jacques Villeneuve all gave NASCAR a try.

But by adding the playoffs, team limits and the charter system to go along with rising costs, NASCAR has greatly discouraged outside drivers to cross over and try NASCAR for a race.

Lewis Hamilton, for example, who is arguably the greatest and most renown driver in the world right now, has expressed interest in racing NASCAR. But Hamilton would have to get sponsors and commit to a full season in order to have that opportunity, and he will never subject himself to either. To show up for a one-off like the Daytona 500, which is probably what he would want to do, Hamilton would likely have to drive for an underfunded team, which is also something he will not do. In the old days, one of the top teams could just roll out an extra car for him to drive, but not now. It’s a huge loss for NASCAR, as landing a driver like Hamilton would get extra eyeballs on whatever race he entered.

Meanwhile, SRX already has the interest of Tony Kanaan, as well as former Cup drivers Greg Biffle, Mike Skinner and Jeremy Mayfield. Now, Mayfield probably won’t be in SRX due his falling out with Evernham back in 2006. But if they worked things out and he was in it, it would certainly grab people’s attention for at least a race.

SRX is placing its driver limit at 12, but maybe it has a set of rotating drivers so a couple different drivers can try it once. Regardless, with it being only a six-race commitment and the cars being equal, I don’t see why it couldn’t land any driver it wants. If it gets big enough, then why not even Hamilton? If this series can get a healthy mix of drivers from different backgrounds, each one with a huge ego, it would be a breath of fresh air in the motorsports world.

If SRX achieves it’s mission of improving on NASCAR’s flaws in these areas, the ball would be in NASCAR’s court to either adapt to improve itself or stay stagnant and watch this new series steal fans and sponsor dollars. And in the day of NASCAR constantly alienating the old fan to chase a new one, the France family better hope that this motorsports series competition ends with NASCAR breeding more excellence.

Michael Massie is a writer for Frontstretch. Massie, a Richmond, Va. native, has been a NASCAR superfan since childhood, when he frequented races at Richmond International Raceway. Massie is a lover of short track racing and travels around to the ones in his region. Outside of motorsports, the Virginia Tech grad can be seen cheering on his beloved Hokies.
@m_massie22
Previous The Good, the Meh & the Ugly: Reviewing All-Star Race Changes
Next Friday Faceoff: Should NASCAR Ban Political Sponsorships?