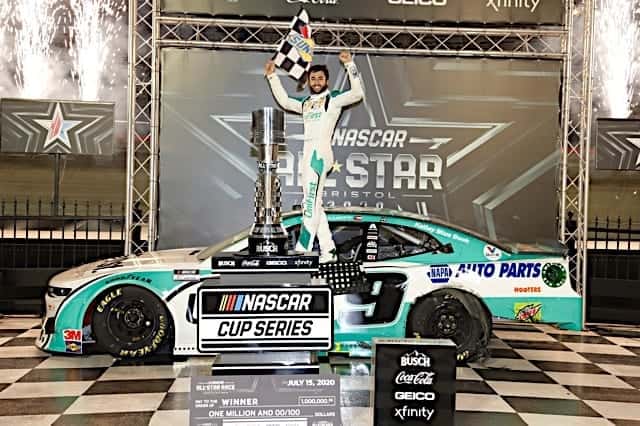 It was the first All-Star race since 1986 that was run outside of Charlotte Motor Speedway. Bill Elliott won at Atlanta that afternoon, and on Wednesday (July 15) it was his son Chase Elliott taking home the checkered flag at Bristol and winning $1 million in the 2020 event. Elliott won the final three stages and really wasn’t challenged by second-place driver Kyle Busch.

The 9️⃣ gets it done!

Retweet to congratulate @chaseelliott on his first #AllStarRace victory! pic.twitter.com/Z313jiHFJF

It was a race that had a lot of anticipation but fell a little short on the expectations. The most interesting moment of the night happened in the NASCAR Cup Series All-Star Open when Bubba Wallace and Michael McDowell were battling for third and made contact, causing Wallace’s No. 43 Chevrolet to spin and hit the outside wall, ending his day.

The night started with the NASCAR All-Star Open, and it was not short on entertainment. It was a three-stage affair with the winners of each stage advancing to the All-Star Race. The starting lineup was determined by random draw with Michael McDowell leading the field to green. Aric Almirola got by for the lead on lap 15 and quickly McDowell started to fade. While battling for the third position, McDowell and Bubba Wallace collided, sending Wallace’s No. 43 car hard into the outside wall ending his day.

The accident came with a bit of controversy around it as many believe the accident was intentionally caused by McDowell after some rough racing with Wallace earlier in the event. One thing is for certain – the close quarters racing ended Wallace’s day. It was also certain where Wallace stood on the incident. In the interview with FOX, Wallace called McDowell a “joke” and expressed his frustrations.

After the accident the race continued and Aric Almirola pulled away and won stage one to advance to the All-Star Race. William Byron took stage two in maybe the most dominant win of the night, and after a good battle with Clint Bowyer, Matt DiBenedetto took the victory in the Open advancing to the All-Star Race. Bowyer’s disappointment wouldn’t last long as he received the fan vote to go to the main event.

The @StewartHaasRcng driver reacts to being named this year's Fan Vote winner. pic.twitter.com/iDEo5ubGDp

That put 20 drivers into the event for the four-segment All-Star Race. The event was broken into four stages of 55, 35, 35 and 15 laps. The first stage was won by Ryan Blaney. Blaney faded late in the event after running the last three segments on the same set of tires. Kurt Busch, Ryan Newman and DiBenedetto all had brushes with the wall at one point, the first two inducing cautions for spins.

From there, it was Chase Elliott’s race to lose. He would win stages two and three and finally take the checkered flag holding off Kyle Busch for victory.

While Chase Elliott dominated most of the event, Ryan Blaney also showed his strength. A tough pit call left him out on old tires but Blaney was fast all night, showing that he is a force to be reckoned with. Kyle Busch also showed some strength when he really needed to. Busch has yet to find victory lane in 2020 and Bristol Motor Speedway is arguably his best racetrack. He worked his way up through the field to finish in the second position and that is something his team can build on for the rest of the 2020 season.

Kyle Busch has started to come alive. Busch has moved into fourth and is pressuring Brad Keselowski for third | #NASCAR

Brad Keselowski was probably the third-fastest car of the night. He never led, but he was in the front all night long and showed that he was a factor when the money was on the line. He came home fourth.

Drivers who Accomplished Nothing

Matt Kenseth’s head-scratching season continued Wednesday night at Bristol. Kenseth was nowhere near the front. In fact, if you didn’t pay attention to the scroll on the left side of the screen, you could have forgotten he was there. Did we see that McDonald’s car all night? Kenseth finished 18th and let an opportunity to gain some momentum for the rest of the season slip through his fingers.

The same can be said for Ryan Newman. He and his No. 6 team have struggled in 2020, registering just one top-10 finish this season. The All-Star Race was an opportunity for that team to show they have figured some things out and stop the bleeding. Newman spun early in the event and never really recovered from there. There were several times when the car slipped on the track as well. It was a mess of a night for the No. 6 team.

Ryan Newman spins and taps the wall, causing a yellow early into the second stage. pic.twitter.com/tcQeIg9pN9

The final All-Star Race for seven-time series champion Jimmie Johnson will be one to forget. The Ally Financial car never showed any kind of speed all night long. They finished 17th on the night. As Johnson says goodbye to the All-Star Race, his fans leave extremely disappointed in the effort the No. 48 team put up on Wednesday night.

The No. 48 crew knocked out a stellar stop. @JimmieJohnson starts Stage 2 in 11th @BMSupdates pic.twitter.com/JIPTvG3bYG

Overall it was an interesting experience for an All-Star Race at Bristol. The race left a lot to be desired as many felt that the Open was much more action-packed than the All-Star Race. There needs to be something to get fans through the early stages. There was no reward for winning stages one, two or three, so there was nothing to add spice to the action. Some kind of monetary bonus for winning a stage and an inversion that puts the fast cars in the back would certainly do the trick. The All-Star Race should be a showcase of how exciting NASCAR Cup racing can be. It wasn’t that tonight.

The tires didn’t fall off nearly as much as I had hoped, and there weren’t a lot of battles for the lead. Once the leader got away, they really got away. Clean air was a huge factor, whether on old or new tires. There’s no doubt the race was much better than it would have been at Charlotte Motor Speedway but there are some things they need to tweak to make it the best it can be.

"You didn't have any options to move around. When you can move up, the cars have a chance to fix the problems you have. So to not have another lane in a short race took all those options away. The 9 car hit it with the single lane we had available."

Speaking of trying things, there were a few new features for NASCAR fans to evaluate. First there was the choose rule, where drivers could pick what lane they were going to go in on a restart. I thought FOX did an extremely poor job highlighting the choose rule and explaining it to the fans. Drivers usually picked their lanes when television was on a commercial break, and by the time the race restarted, you had a hard time figuring out who went where.

The underglow lighting was certainly interesting. I felt that the cars who didn’t have them (the open cars who advanced to the All-Star Race) stood out more than the cars that did. Some colors didn’t mix well at all with certain paint schemes, and the fact that the light only lit up the back end of the cars felt a little silly. With some adjustments this could be something that works, but I still don’t see the point in it.

Kevin Harvick on the underglow.

"I wish mine would have fallen off. The only person who seemed to like it was my 8 year old."

Finally the number change on the cars was certainly different. Some cars looked better than others based on placement and size. I believe this is something we are going to see in the future, so I hope NASCAR regulates it a little better rather than leaving it in the team’s hands. This way every car is uniform and looks half way decent.

That race will be followed by the NASCAR Gander RV & Outdoors Truck Series Vankor 250 at 8 p.m. ET on FS1 later that day. The race will feature five-time Texas winner Johnny Sauter and points leader Austin Hill. There are 36 entries for the event.

The Cup Series will run the O’Reilly Auto Parts 500 at Texas on Sunday at 3 p.m ET on NBCSN. The two drivers with the most wins in 2020 have the last two wins at the facility, Kevin Harvick and Denny Hamlin.

The starting lineups for all three series will be determined by random draws later in the week.

I think the lights are a bit silly, as knowing the manufacturer is not high on my list of priorities to enjoy a race. I wasn’t aware that the choose rule made much difference on the track, but it does eliminate the silly slowing down on pit road to try for inside or outside, so I guess that’s a plus overall. I barely noticed that the numbers on the cars were placed slightly differently. All in all, being on a short track made it slightly more interesting than usual, but nothing special. congrats to Chase.

First, it was a lot boring. The drivers were making laps so on to Texas. I could care less for the Australian Super Car look, but that is OK, the lights, another story. Whoever came up with that idea should be identified, fired, and never hired again.
It was a dull as his father winning the only other one held outside of Charlotte. This was a good idea to show that a track like Bristol is not good for this type of race.
Leave it in Charlotte.
Now, if you want it in Bristol, let them qualify on the round track and then go to the drag strip and eliminate each other, no changing cars, tires, or set ups. Run them down the quarter mile. At least someone would pass.
That was a nothing burger.

I’m pretty sure the guy whot came up with the idea for those rdiculous lights is the same guy who came up with that cartoon gopher Fox used to annoy us with.

The general consensus is that the Open was okay and the All-Star race sucked once again. I gotta agree with both assessments.

Bubba Wallace may be right about Michael McDowell, but those two fighting that hard that early kind of begs for a bad ending for at least one of them.

I like the idea of an inversion for the last stage, but you’d need more than 15 laps for that to give everyone a chance.