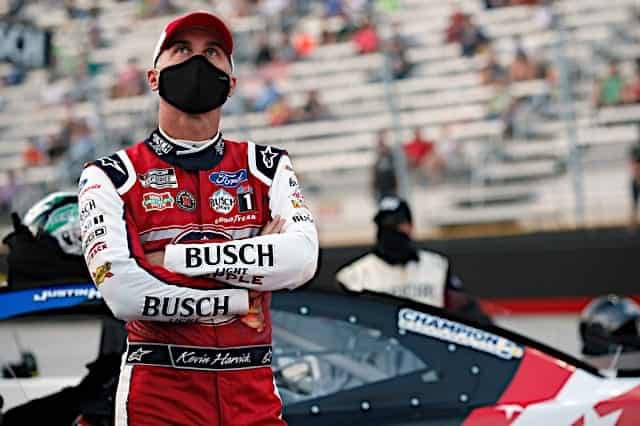 Yeehaw! NASCAR Cup Series teams have saddled up their horses and are headed to the Lone Star State. It’s time to set your NASCAR DraftKings lineups for Sunday’s (July 19) O’Reilly Auto Parts 500 at Texas Motor Speedway. This race was supposed to be held in the spring, but was postponed due to the COVID-19 pandemic.

Texas is another 1.5-mile track where speeds will be high and passing difficult. The facility was repaved in 2017 and is shaped similar to Atlanta Motor Speedway and Charlotte Motor Speedway. Since Sunday will be the first time the Cup drivers compete in the mid-July heat at Texas, tire wear could be a factor along with driver stamina. Will hot racers lead to hot tempers on a racetrack known for producing hard crashes?

As usual during this pandemic, there’s no practices for this race. Instead, the lineup was set by a random draw of three groups of 12 based on owner points. Aric Almirola drew the pole for Sunday’s event, his fifth start on the front row and second from the top spot.

Since there are 334 laps in this event, you’ll want to target drivers who lead laps in addition to those who can finish higher than where they start. Pick wisely; in five of the last six races, there was one driver who led over 100 laps. The one exception came last spring, where several drivers led 40 or more circuits.

Before I move on to this week’s picks, let’s review the results from Kentucky Speedway.

I should’ve known better than to choose Kyle Busch, with the year he’s been having. He had some kind of a problem at Kentucky that required several pit stops to diagnose and fix. Matt Kenseth also had some issues, spinning out late in the event. He wound up losing eight positions on the track from where he started to finish 25th.

Harvick has won the last three fall events at Texas and finished inside the top 10 in 11 straight races. Additionally, he’s led 608 laps and recorded 444 fastest laps in that same time span. I think it’s safe to say he’s good there? (Though, to be fair, where is Harvick not good at these days?)

Even though he wasn’t as fast last week at Kentucky, a good pit strategy helped Harvick get to the front, even going four-wide for the lead. Though Ryan Blaney caused a tire rub on the green-white-checkered finish, the No. 4 Stewart-Haas Racing pilot still wound up fourth. Harvick is making his 700th Cup start on Sunday and hopes to cap off the milestone with his series-best fifth win of the season.

Yes, I know Bell is starting far back in the pack again (33rd). It will take some good pit strategy and a fast car to get to the front. However, after fellow rookie Cole Custer took the win last week at Kentucky, anything is possible for another of last year’s Big 3 NASCAR Xfinity Series title contenders.

Bell could very well win this race, though his Leavine Family Racing team isn’t as strong as Custer’s. He did it last fall in NXS, leading over half the laps en route to his eighth win of the season. Bell also led 127 circuits last spring before taking third behind Kyle Busch and Tyler Reddick.

In addition, the No. 95 Toyota driver has improved greatly this year; he rallied for seventh after starting 34th last Sunday at Kentucky. This strong performance produced 64.5 DraftKings points. What’s even better is Bell’s a lot less expensive this week (thank you, DraftKings!). Although the Cup rookie should be a popular pick, he’s still one you should place in your lineup.

OK, so Jones hasn’t had a great year so far; in 17 races, he’s only earned four top fives and six top 10s. He’s had about as much bad luck as his Joe Gibbs Racing teammate Kyle Busch, putting himself on the outside of the postseason picture looking in.

However, Texas is a place where Jones can turn his luck around. He is currently on a five-race top-10 streak there, including three fourth-place finishes. The young driver even led 103 total laps at Texas — the majority of those coming from the spring 2018 event. Could he find his first victory of the year Sunday? Either way, he’s starting from 23rd, so even without a win Jones could still score well on DraftKings. Hopefully, that bad luck bug won’t plague him this week.

Harvick’s SHR cohort is a bit of a risky play on DraftKings since he’s starting on the pole. That’s a risk I’m willing to take, though, especially after his performance last week. Almirola led 128 laps and had 36 fastest laps last Sunday. Unfortunately, his car reacted differently in Kentucky traffic and had to settle for eighth by the finish. Still, the veteran earned 82 DraftKings points, his sixth consecutive score of 45 fantasy points or more. Almirola also was fifth in the Dixie Vodka 400 at Homestead-Miami Speedway, another 1.5-mile track.

Though most of his results at Texas weren’t great, the No. 10 Ford Mustang driver has three straight top-10 results there. Last fall, he was runner-up behind Harvick and led 62 laps in that race. Almirola could have a similar run Sunday if he avoids trouble.

Note: I also like Ryan Blaney, who is starting alongside Almirola on the front row. It would be impossible to fit both in this lineup, but take a look at his track record here (four top 10s in the past five Texas races) if you want an alternative.

Dillon may have only one top 10 at Texas, but he does have four more top-15 finishes. However, Dillon is my honorable mention mainly for his strong results this year. The No. 3 Richard Childress Racing pilot has one top five, four top 10s and 13 top 20s thus far. Last week at Kentucky, he finished 13th and scored 37.5 DraftKings points; at Homestead, he had 49 DraftKings points after ending in seventh place. That’s very good value for a sub-$7,000 price tag. Hopefully, Dillon will keep up the good work this week as he continues to battle on the playoff bubble for RCR.

Notice one thing different here? That’s right; instead of Michael McDowell, I picked his Front Row Motorsports teammate Nemechek. Though the DraftKings score don’t really reflect his achievements, Nemechek has two top 10s and nine top 20s this season. What put him down fantasy-wise was mostly a strong starting position. The good results under NASCAR’s current qualifying draw limits position differential points for the rookie and his underfunded team.

Since Nemechek’s starting 28th this time, he should have a good DraftKings score if he gets another top 20. However, a low price and starting position should make him a popular play in tournaments, so your roster might not stand out from others. Keep that in mind if you want to win big.

Also, in NXS Nemechek earned two top fives and three top 10s at the Fort Worth track. Maybe he could apply some of what he learned in past events to Sunday’s O’Reilly Auto Parts 500.