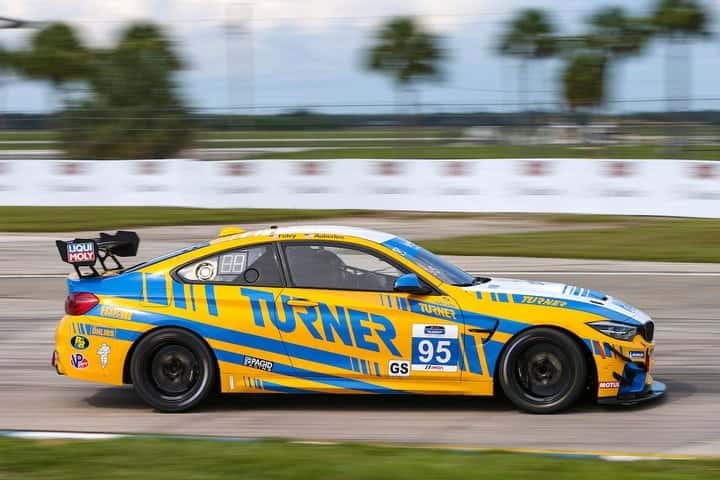 In the morning practice session, it was the Chevrolet Camaro GT4.R of Robin Liddell that topped the charts with a lap at 102.389 mph for Rebel Rock Racing.  Liddell’s lap was a full eight-tenths of a second faster than the Porsche of Archangel Motorsports’ Alan Brynjolfsson.  Daytona winner Dylan Murry of Riley Motorsports was third fastest in his Mercedes, while Motorsport In Action’s Corey Lewis was fourth in the J.G. Wentworth-sponsored McLaren.  Foley was fifth in Turner Motorsport’s No. 95 BMW.

Winward Racing’s Alec Udell was sixth in his Mercedes, while Kyle Marcelli, fresh off a successful weekend at VIR, was seventh fastest in the KohR Motorsports Aston Martin.  Indy Dontje was eighth quickest in the second Winward Racing Mercedes, followed by Jeff Westphal in the sole Audi R8 LMS GT4.  Murillo Racing’s Eric Foss was 10th.

In TCR, the expansion of Bryan Herta Autosport (BHA) to four cars has not hurt the team’s pace.  Gabby Chaves put the No. 33 Hyundai on top with a lap at 99.028 mph, good for 21st overall.  Chaves’ lap was five-eighths of a second faster than Roadshagger Racing’s Jon Morley in his Audi RS3 LMS Club Sport.  Michael Lewis was third quickest in the No. 98 Hyundai with Tim Lewis Jr. in the sole Alfa Romeo Giuletta TCR in fourth.  Fast MD Racing’s Mikey Taylor was fifth.

In the afternoon session, Foley set the fastest lap of the day relatively early in the 60-minute session.  It held up to the best lap of the day, three-tenths of a second faster than Liddell in the morning.  Unlike the morning session, times were much closer in the afternoon.  Foley’s lap was just nine-thousandths of a second faster than Dontje in the Mobil 1-sponsored Mercedes.  Westphal was third quickest, followed by Murry and Foley again.  No, that is not a misprint.  Turner Motorsport has two BMW M4 GT4s entered this weekend, Nos. 95 and 96.  Foley is entered in both cars.

Liddell was sixth in the sole Camaro, while Lewis was seventh.  Trent Hindman in the VOLT Porsche was eighth, while Foss and PF Racing’s Chad McCumbee rounded out the top 10.

In TCR, BHA’s red No. 33 was once again fastest, this time with Ryan Norman topping the charts with a lap at 99.909 mph, good for 19th overall.  That lap was three-quarters of a second faster than teammate Mason Filippi.  Mark Wilkins completed a BHA sweep of the top three spots.  Taylor was fourth in his Audi, while Spencer Brockman was fifth quickest in the fourth BHA Hyundai Veloster N TCR in his series debut.

While the first practice session was clean, the second session had two brief red flags.  The first one was due to Marcelli stopping on course with his Aston Martin 25 minutes into the session.  Later on, Lewis stopped his McLaren on course as well, ending the session a few minutes early.

Qualifying for the Advent Health 120 is scheduled for 10:25 a.m. Friday morning.  We’ll have a recap of the session right here at Frontstretch ahead of the race.