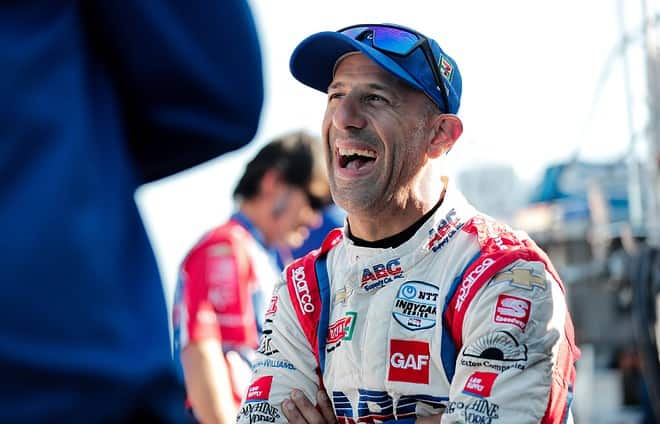 It’s been over a month since Tony Kanaan last competed in an NTT IndyCar Series race, but the 23-year veteran returns to action for the Iowa IndyCar 250s at one of his most successful tracks—and it will be a very busy weekend for him.

Kanaan will drive AJ Foyt Racing’s No. 14 entry in this weekend’s doubleheader at Iowa Speedway for rounds two and three of his five-race Last Lap tour. The Brazilian previously announced that the 2020 IndyCar season would be his final full-time campaign.

To mark the occasion, he will serve as the grand marshal for Friday’s race and give the command to start engines from the cockpit of his car.

Additionally, Kanaan’s car will have a new look for both races. On Wednesday, he announced that long-time partner Bryant Heating & Cooling will serve as the primary sponsor of his car for the doubleheader.

🇺🇸 🚨 New livery alert 🚨
I’ll be driving this beauty in the double-header races at @iowaspeedway! #Bryant Home Comfort will be the primary sponsor on the No. 14 @AJFoytRacing @TeamChevy this weekend!#TKLastLap #INDYCAR #Bryant pic.twitter.com/EQmMHj4X18

For Kanaan, the Iowa weekend will be one of many emotions. In addition to being honored at Iowa Speedway, he’ll finally race in front of his fans for the first time this season.

“It’s amazing,” he said during a media conference Wednesday. “It’s something that is hard for me because I’m very emotional. I’m going to have to actually hold my breath because I’m really easy to get emotional when people are doing stuff.”

Kanaan heads to Iowa hopeful to record a solid finish in both races. In his lone start this season at Texas Motor Speedway, he finished a respectable 10th. In 13 previous starts at Iowa, Kanaan has five podiums, including a victory at the 7/8-mile oval in 2010.

The Foyt team also looks to record more solid results this weekend. At Texas, Kanaan’s teammate Charlie Kimball finished right behind him in 11th. Kimball then ended up in 11th and 10th place, respectively, during last weekend’s doubleheader at Road America.

“I really want to enjoy being in the car, doing what I love to do, and [Iowa] is one of the best places for me to do that,” Kanaan said. “I’m extremely, extremely hopeful we’ll be competitive there. I think we have a good thing going. We still have a couple things we need to adjust, but the cars are definitely better this year with a lot of changes we’ve made.”

In addition to battling their competitors on-track, IndyCar drivers will battle the elements this weekend. With temperatures expected to be in the mid-80s and low 90s, both races will be physically demanding. However, Kanaan has no worries about the weather. Although he is the oldest driver on the circuit, he is also the most physically fit.

“I think it’s going to be extremely tough,” he explained. “I talked to the guys, everybody is kind of complaining a little bit that it’s quite a bit hot. But I’m ready.

Following Iowa, Kanaan’s final two races of 2020—and his full-time IndyCar career—will be the Indianapolis 500 and Gateway.

However, despite the calling this season his Last Lap, Kanaan has no plans to hang up the helmet just yet. While he admits that his idea was to slow down a bit, IndyCar fans will likely see Tony Kanaan on the grid for some events in 2021.

“I still have plans to do a few races next year,” he revealed. “Obviously a lot of things need to fall in place. It’s quite obvious that I want to do the 500 again. A lot of my sponsors are on board with that.

“But as this year happened the way it happens, I think we have a pretty good chance to probably do exactly the same thing next year.”

Tony Kanaan to Run Ovals in Chip Ganassi Racing’s No. 48