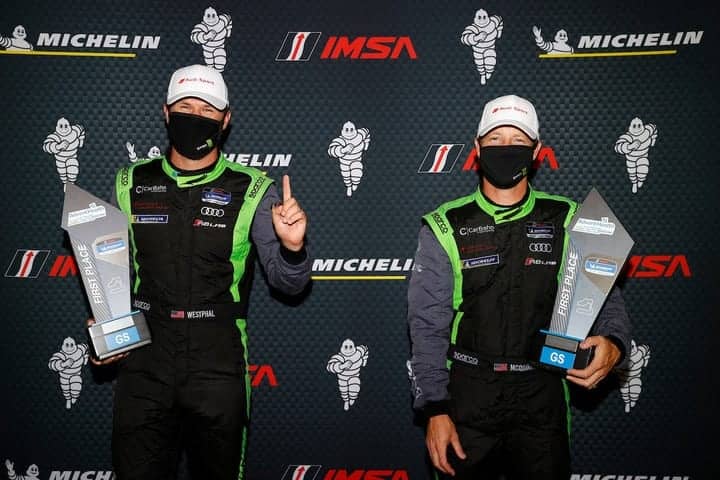 CarBahn Motorsports with Peregrine Racing’s Tyler McQuarrie and Jeff Westphal claimed victory in the Advent Health 120 Friday (July 17) at Sebring International Raceway.  The race was scheduled to run for two hours, but ultimately had a little less than an hour of racing at speed due to lightning.

Despite the race essentially being held around thunderstorms, it was actually pit strategy that helped the defending IMSA Michelin Pilot Challenge Grand Sport champions claim their first win of 2020.

“We stretched [McQuarrie’s] fuel so that we could fill a little less and get out of the pits quickly,” Westphal told NBC Sports’ Parker Kligerman after the race.  “I had no idea where I was going to arrive on the backstretch and where the cars with hot tires were going to be.  That question was answered shortly.  From there, it…was go go go.”

Due to the ongoing COVID-19 pandemic, Michelin Pilot Challenge teams did not use the regular pit lane on Friday.  Instead, in order to keep the teams separate from IMSA WeatherTech SportsCar Championship teams, the 35 teams were set up in an auxiliary pit lane on the Ullmann Straight (or backstretch, as Westphal put it) that was constructed for use by the FIA World Endurance Championship as part of the SuperSebring weekend last year.

McQuarrie started from the pole in his No. 39 Audi R8 LMS GT4 and led early.  Meanwhile, Turner Motorsport’s Robby Foley got past KohR Motorsport’s Nate Stacy to take second.  McQuarrie opened up a slight lead over Foley and Stacy before the margin stablized.

Just 12 minutes into the race, Bryan Herta Autosport’s Spencer Brockman was hit by the Chevrolet Camaro GT4.R of Frank DePew in Turn 7 and spun out.  Brockman was able to continue, but DePew’s Camaro broke some steering parts due to the contact.  DePew pulled off and drew the full course caution.

Shortly afterwards, lightning struck within eight miles of the track, forcing IMSA to throw the red flag.  Everyone eventually was forced to evacuate the pit lane.

The stoppage lasted for 75 minutes.  The clock ran down until there were 70 minutes remaining before it was stopped by IMSA.  During that stoppage, it did rain some as the severe thunderstorm pushed through.  However, the humid South Florida weather resulted in a good chunk of that precipitation evaporating before the race restarted.

Once the all-clear was given, the race was able to resume.  Given the evaporation, everyone chose to stay on slicks for the restart on a slightly damp track.

McQuarrie was not able to get away from Foley after the restart, but Foley couldn’t make a move on McQuarrie.  Meanwhile, PF Racing’s Chad McCumbee and Multimatic Motorsports’ Scott Maxwell gave chase.

Eventually, Stacy was able to get back past Foley for second and immediately put the pressure on McQuarrie.  Three laps later, Stacy got a run exiting Sunset Bend and took the overall lead away from McQuarrie on the extra bumpy frontstretch.

Stacy held onto the advantage until the final stops began.  Stacy pitted on Lap 18, while McQuarrie held on for three more laps before pitting.  In that six-plus minutes, McQuarrie put down a couple of fast laps that burned off more fuel.  Having to take on less fuel allowed for a shorter stop.  Prior to the stops, McQuarrie was about three seconds behind Stacy.  After the stops, Westphal ended up three seconds ahead of Stacy’s teammate Kyle Marcelli.

Marcelli tried to close the gap on Westphal while Westphal was warming up his Michelin tires.  Once those tires were warm, Westphal began pulling away as dark clouds gathered around the 3.74-mile circuit once again.

The full-course caution flew again with 13 minutes remaining after lightning was spotted again.  Given the amount of time remaining, the remainder of the race was run under yellow.

Stacy and Marcelli ended up second in their Aston Martin.  An excellent run on fresh tires boosted Archangel Motorsports’ Trent Hindman and Alan Brynjolfsson to a third-place finish in their Porsche.  Winward Racing’s Indy Dontje and Russell Ward finished fourth, while Foley and Bill Auberlen were fifth.

In TCR, Hyundai monopolized the front of the class for nearly the entire race.  Ryan Norman started from pole, but almost immediately lost his advantage to teammate Harry Gottsacker.  Gottsacker then put a number of Grand Sport drivers between himself and the rest of the class, resulting in an immediate six-second lead.  By the time the red flag came out, Gottsacker was already up to 11th overall and running strong.

Gottsacker’s No. 21 came back down to earth after the storm pulled through.  That allowed Norman to run him back down and re-take the advantage.

Norman held onto the advantage until the sole round of pit stops took place.  Norman pitted from the lead and had a catastrophic driver change.  Teammate Gabby Chaves could not locate one of the belt straps and lost a bunch of time on their stop.  Meanwhile, the No. 21 team had an excellent stop.  Mark Wilkins was able to get into the No. 21 without problem, fuel added and the front tires changed.

Once the stops were complete, the No. 21 Hyundai Veloster N TCR with Wilkins at the wheel was back in the lead by three seconds over teammate Michael Lewis.  From there, Wilkins was able to hold on to take the win.

Lewis and Mason Filippi were second, followed by Forty7 Motorsports’ Alex Papadopoulos and Ben Waddell.  Fast MD Racing’s No. 23 Audi for Max Faulkner and James Vance was fourth, while teammates Michael McCarthy and Mikey Taylor were fifth.  The bad pit stop for Norman and Chaves dropped them to a seventh-place finish.

IMSA Michelin Pilot Challenge teams will be off next weekend before traveling to Road America in Wisconsin for the Road America 120 on Aug. 1 at 4:45 p.m.  The race will be streamed live on NBC Sports’ TrackPass service.