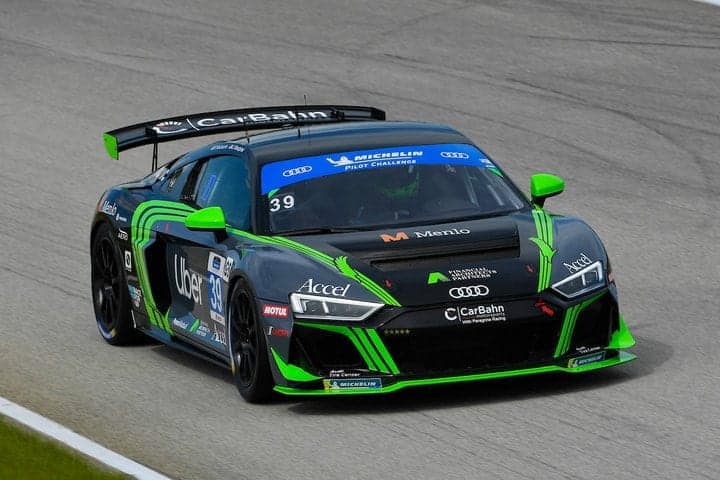 CarBahn Motorsports with Peregrine Racing’s Tyler McQuarrie won the overall pole Friday morning (July 17) for the Advent Health 120 with a lap at 103.021 mph.  It is the fastest lap of the whole weekend in Grand Sport.

McQuarrie’s lap was a full second faster than KohR Motorsports’ Nate Stacy, the team’s Aston Martin Vantage GT4 repaired after stopping on course during the second practice session Thursday.  Turner Motorsport’s Robby Foley, who was fastest overall in practice on Thursday, will start third.  Since he is also entered in Turner Motorsport’s No. 96 BMW, he can only score points in the No. 95.

Winward Racing’s Russell Ward qualified the Mobil 1 Mercedes in fourth, while James Cox will start the Wynn’s Mercedes in fifth.  PF Racing’s Chad McCumbee will start sixth in the fastest of the Ford Mustang GT4s, while Scott Maxwell will start seventh.

Murillo Racing’s Jeff Mosing will start in eighth, while Archangel Motorsports’ Alan Brynjolfsson will start ninth in the best of the Porsches, two seconds off of the pole.  BimmerWorld Racing’s James Clay will start 10th.

TCR was nothing short of a mid-morning Hyundai party as the Hyundai Veloster N TCR took the first five places in qualifying.  Ryan Norman, who was fastest in TCR practice Friday, won the class pole with a lap at 100.499 mph, good enough for 15th overall.

Norman’s lap was one-third of a second faster than teammate Mark Wilkins.  Mason Filippi will start third, followed by Forty7 Motorsports’ Ben Waddell.  Spencer Brockman in the No. 29 Hyundai rounded out the top five.  The best non-Hyundai was Fast MD Racing’s Max Faulkner in sixth.

The Advent Health 120 is scheduled to go green shortly after 2:30 p.m. ET Friday afternoon.  The race will be streamed live on NBC Sports’ TrackPass service.