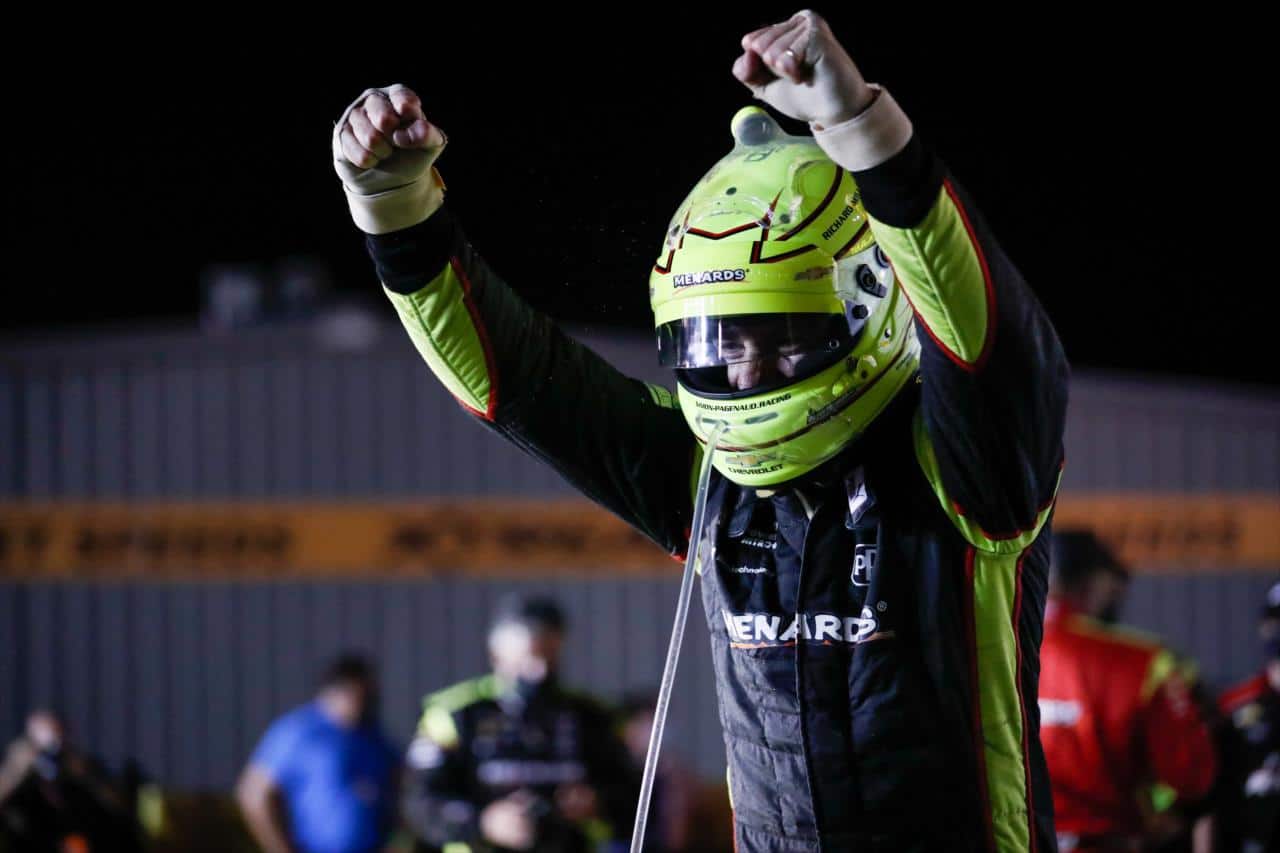 While the Iowa 250 may take place on the shortest track of the NTT IndyCar Series schedule, the first race of the weekend at the 7/8th-mile oval certainly wasn’t short on action. Two big crashes changed the complexion of the race, enabling Simon Pagenaud – the Team Penske driver who failed to qualify and thus started dead last – to win his first race of the 2020 season on Friday, July 17.

In his post-race interview, Pagneaud was ecstatic in a way that summed up the various and wild strategies of the race.

Conor Daly led the field to the green flag at the first Iowa 250 event, both his first IndyCar pole position and his team’s (Carlin Racing). Team Penske driver Josef Newgarden immediately lined up behind Daly but struggled to make a move for first in dirty air. Daly then put a near two-second gap on the rest of the field early on.

Most of the action took place in the rear of the field with Marco Andretti, Charlie Kimball, Pagenaud and Scott Dixon battling for 16th and 17th positions.

Newgarden made the move for the top spot on lap 14 and immediately took off. Daly was almost a second slower than the No. 1 Team Penske driver on the previous lap, squandering the advantage he built early on in the race.

20 laps later, the gap between Will Power and Colton Herta for third position began to shorten, highlighting that race strategy at shorter tracks like Iowa Speedway is not just about what a driver wants from their car; they also have to combat what their competition is doing. On lap 51, Power passed Daly for second and chopped down Newgarden’s six-second lead.

Takuma Sato and Pagenaud opted to pit early with the rest of the competition beginning to come in after lap 63. A clutch problem plaguing the Andretti Autosport cars of Andretti and Zach Veach saw Andretti have a long pit stop that put him eight laps down, taking him out of contention. Newgarden also had a difficult pit stop, one that put him behind Power on-track.

Felix Rosenqvist waited to pit until lap 84, his No. 10 Chip Ganassi Racing team attempting to take on a two-stop approach. Sato’s strategy kept him out in the lead for a significant period of time.

Tony Kanaan was the first driver to make contact with the wall, running just too high and getting into the marbles. While he was able to bring the car back into pit lane without causing a caution, it was certainly a disappointing event for a driver looking for a successful year to mark his retirement.

Starting on lap 107, Newgarden began edging closer to Power, dipping his nose on the inside of Power but unable to make the move with Patricio O’Ward getting closer to his rear. It took O’Ward coming into the pits to give Newgarden the edge. He ultimately completed the move on lap 125, settling into second until Sato pitted two laps later, signaling the second round of stops.

The first caution came out on lap 144 after a rough wreck involving Power. Following a shoddy pit stop, his right front wheel completely fell off after the No. 12 brushed the wall. The tire then bounced on top of Power’s car, the aeroscreen proving its worth as a safety measure by deflecting the assembly, preventing serious injury.

The restart was waved off as it came up on lap 157, but it seemed as if drivers in the rear of the field were unaware that decision was made. Herta accelerated, driving up on the back of Rinus Veekay and launching his No. 60 car in the air. He skimmed the SAFER barrier but was able to walk away unscathed. Veekay’s aeroscreen prevented the underside of Herta’s car from hitting his head and very well may have saved his life. In his interview after leaving the care center, Herta maintained that he was told the track was going green.

The next restart came on 171 with Arrow McLaren SPM drivers O’Ward and Oliver Askew leading the field to green. Newgarden was a lap down at the restart but did mange to unlap himself. Pagenaud, restarting in third, easily attacked both drivers in front of him. He started the race in dead last and worked his way up to the front on merit. By lap 195, the top three was Pagenaud, Alexander Rossi and Dixon – a surprising change considering that none of them seemed to be contenders at the start of the race.

Even with the end in sight, the first race of the Iowa 250 weekend was difficult to predict. Every driver was on a different strategy which meant that leaders Pagenaud and Dixon could very well have to pit. With 20 laps to go, Askew was running five tenths to a full second faster than the leaders. He was ultimately able to pass Rossi, earning himself a podium finish.

Ultimately, though Askew couldn’t catch Dixon, and the CGR driver wasn’t able to close the gap to the front. No. 22 Team Penske driver Pagenaud scored his first win of the season despite starting back in 23rd after a failure to qualify for the race. Askew, O’Ward, and Newgarden rounded out the top-five finishers.

Pagenaud had nothing but praise for his team after the race event.

“First of all, amazing group effort for all of Team Penske to recover from Road America,” Pagenaud said. “Qualifying was disheartening, but these guys never give up. This is what this team is all about.

“I knew we had a really good car on the long runs, so that was my chance.”

Second place Dixon seemed relieved to have turned a poor qualifying effort into a solid result. “Proud to be powered by Honda, they did a tremendous job on fuel mileage,” Dixon noted. “That’s what enabled us to stay out and jump a couple guys.”

Arrow McLaren SP, a team defined by its youth, has proved a strong competitor this season. Askew seemed overjoyed at his podium, starting his interview by saying, “I wish you could see my smile right now. This [car] absolutely came alive once the track got cooler. If that yellow didn’t come out at the restart there, I think we would have had a really good shot at finishing 1-2. We’ll get at ’em tomorrow.”

“We’re gonna be pushing for 1-2 tomorrow,” O’Ward said. “We’ve got really fast cars, and these guys deserve to win.”

If there was a common theme in post-race interviews, it was the fact that almost everyone seemed to really enjoy the challenge presented by Iowa Speedway. Whether they feel that way about the track tomorrow, however, remains to be seen.

The second event of the Iowa IndyCar 250 from Iowa Speedway will take place Saturday, July 18 at 8:30 p.m. ET on NBCSN.

THE RIGHT SIDE OF THE CAR HIT THE WALL. THE LEFT FRONT TIRE CAME OFF !!

Also, I don’t think the tire actually hit the aero screen, it bounced over the car. It was a close call that “could have been”.

Good race overall, but I did get annoyed when the pit reporter started to forcefully guide comments toward the aero screen after Herta’s incident. Yes, it helped keep Herta’s wing from bouncing off Veekay’s head, as well as the car from resting on top of his head. We all saw that, no need to drive a wire brad into sheetrock with a sledgehammer.