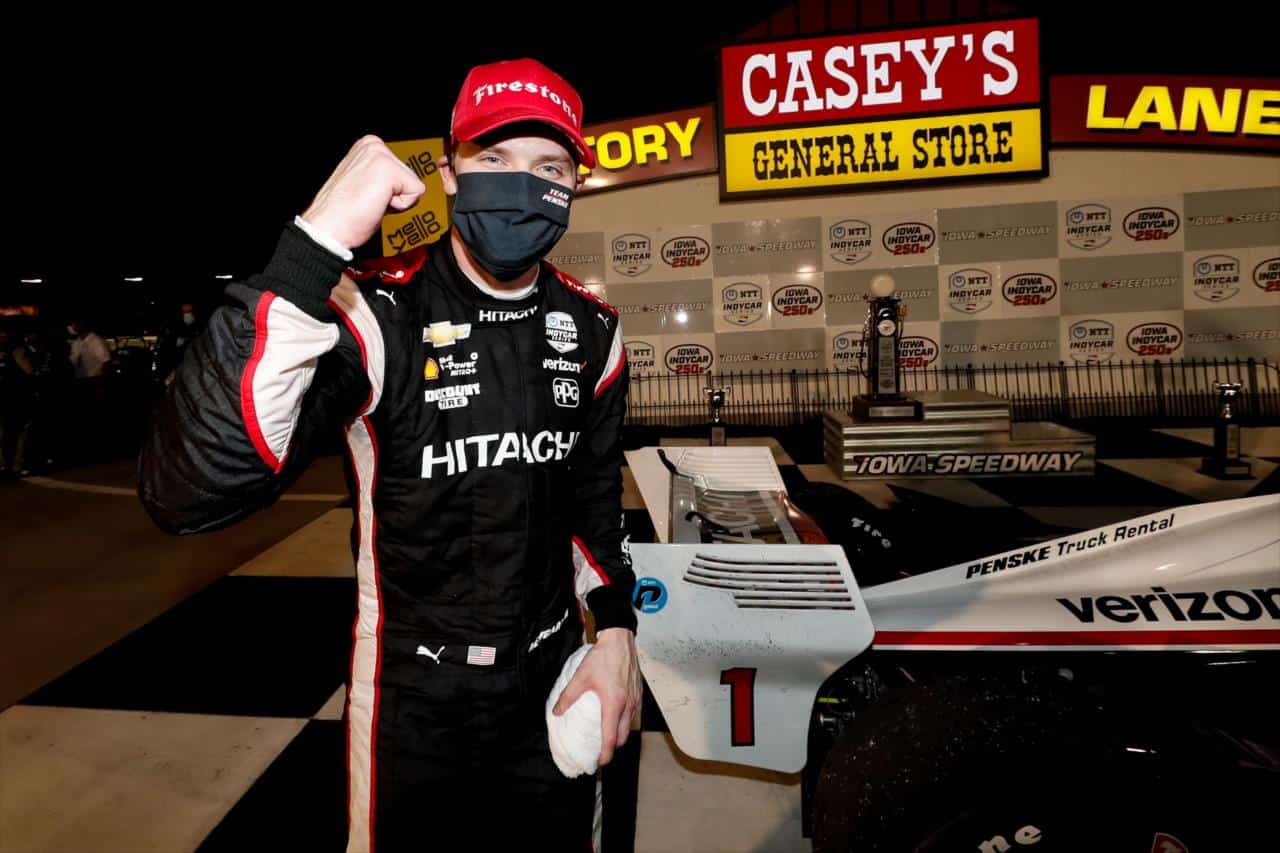 For the second time in 24 hours, the stars and cars of the NTT IndyCar Series were under the lights at Iowa Speedway Saturday night (July 18).

But while Simon Pagenaud went from last to first the night prior, it was his teammate who emerged victorious in round two.

Josef Newgarden started the race from the pole position and dominated the event, leading 214 laps to win for the third time in his career at the 7/8-mile bullring.

The victory capped off a strong weekend performance for the No. 1 team, as Newgarden finished fifth in the previous night’s race.

“It feels really good,” Newgarden said following the race. “I don’t know what we need to do to get the bad luck off us, but hopefully this is a start.

“Our guys did such an amazing job yesterday. I was so disappointed for them. I was angry for them because I felt like they had the winning car. We put in the work. We just weren’t able to get rewarded for it. I was so determined to come back today.”

Newgarden’s teammate Will Power finished the race in the second position for his second podium finish of the year. Power felt relieved to record a solid finish after a difficult season so far.

“It feels good to just have a solid day,” Power said. “I would have loved to have had the win of course but it seems like if you did a good job in this series, you just get screwed. I’m glad for once we actually did get a good result out of it.

Graham Rahal was the third and final driver to stand on the podium, recording a solid third-place finish for the RLL team. Meanwhile, Pagenaud ran another respectable race, finishing fourth after starting last.

While Saturday night’s race was as action-packed as Friday’s was, there were still two notable retirements.

The first retirement of the night came out on Lap 114 when Ed Carpenter made contact with the outside wall in Turn 2, bringing out the caution. With cars ahead of him, Carpenter too went high into the corner and lost control, prematurely ending his night.

On Lap 180, the caution flag came out for the second and final time of the night. For the second consecutive night, Ryan Hunter-Reay hit the inside wall after returning to the track from pit road.

This time, @IowaSpeedway is not as forgiving. Take a look at what happened on both nights. #INDYCAR // #Iowa250s on NBCSN pic.twitter.com/DeArDCgkUM

“[That was] absolutely down to me,” Hunter-Reay said. “It’s got to be better than that. I was looking to make a lot of time on that out lap, and I short shifted out of second gear knowing first gear was my problem last night. I got in second, and it just came around. Almost caught it. Almost doesn’t count.”

Patricio O’Ward also endured a tough break in the race. As the third and final set of pit stops approached, O’Ward had made his way up to the second position.

However, disaster struck during O’Ward’s final stop. Due to a miscommunication, O’Ward left his pit stall prematurely. The lug nut on his inside rear tire was not fully tight, forcing him to back into his stall for his team to complete the job.

A disastrous pit stop for Pato O'Ward, who was in second, as the lugnuts aren't tight, and O'Ward has to back up. #INDYCAR #IOWA250s pic.twitter.com/i0GIKe8T0o

O’Ward eventually finished the race in the 12th position, the first driver to finish a lap down.

“What could’ve been,” O’Ward wrote on Twitter following the race. We win and lose as a team. This one hurts, but we will come back stronger.”

With the fifth race in 15 days now in the books, IndyCar competitors will now receive some well-earned time off. The 2020 IndyCar season will resume with the Honda Indy 200 from Mid-Ohio on Sunday, August 9, 2020 at 1:30 p.m. ET on NBCSN.