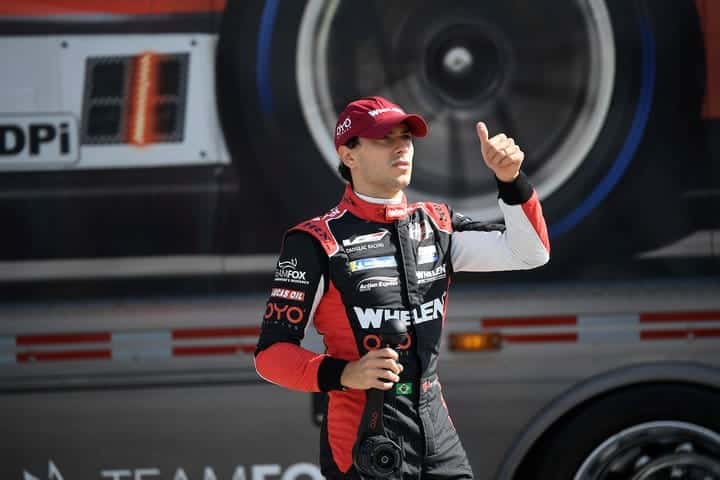 Wayne Taylor Racing’s Renger van der Zande did not take it easy.  The Dutchman’s first lap at speed was faster than all but Derani in practice.  Van der Zande then bettered it on his next lap.  However, Derani was quick and decisive.  He set his quick lap and everyone else seemed to say, “I cannot beat that.”  As a result, most of the DPis pulled in early.

LMP2 rules mandate that amateur (meaning bronze or silver-rated) drivers must qualify and start cars in the class.  As a result, Gustavo Menezes‘ hold on the top of the class speed charts came to an end because he’s not allowed to qualify.

Instead, it was PR1 Mathiasen Motorsports’ Patrick Kelly that came to play.  He was able to be fast early and often.  On his fourth time around at speed, Kelly set a lap at 120.725 mph, which was good enough to win the LMP2 pole.

Kelly’s lap was over a half a second faster than DragonSpeed’s Henrik Hedman.  Performance Tech Motorsports’ Cameron Cassels qualified third.

GT Le Mans saw similar tactics to what we saw in Daytona.  The Corvettes went out first right at the start of the session, followed by the Porsches.  Meanwhile, the BMWs waited until the second half of the session to leave the pits.

Jordan Taylor laid down the gauntlet quickly.  On his second timed lap, he set a class lap record at Sebring.  The third was even better at 116.436 mph.  Once that was done, Taylor pulled in and let everyone else take their shots at it.

Ultimately, no one got close as Taylor took his first career GT Le Mans pole.  He was three-eights of a second faster than teammate Oliver Gavin.  Porsche GT Team’s Frederic Makowiecki will start third in class, while Laurens Vanthoor was disappointed with fourth in class, three-tenths of a second slower than Makowiecki and three-quarters of a second off pole.  BMW Team RLL’s Jesse Krohn will start fifth.

In GT Daytona, AIM Vasser Sullivan continued the dominant form that they showed two weeks ago in Daytona.  Unlike in Daytona, it was Frankie Montecalvo who brought the thunder, claiming his first career GT Daytona pole with a lap at 111.098 mph.  The lap was seven-hundredths of a second quicker than teammate Aaron Telitz.

The two Lexus RCF GT3s had eight-tenths of a second on the rest of the class.  That group was led by Scuderia Corsa’s Cooper MacNeil in the WeatherTech Ferrari.  Turner Motorsport’s Robby Foley will start fourth, while Compass Racing’s Corey Fergus will start fifth.

The Cadillac Grand Prix of Sebring is scheduled to go green shortly after 5:30 p.m. Saturday.  The race will air live on NBCSN, immediately after the Xfinity Series My Bariatric Solutions 300 from Texas Motor Speedway