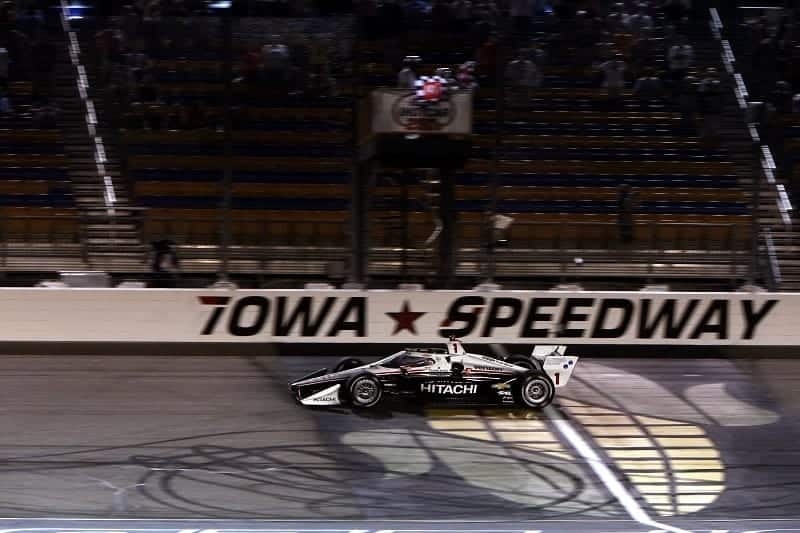 The 2020 Iowa IndyCar 250s were the second doubleheader weekend for the NTT IndyCar Series—and the second in two weeks. IndyCar teams and drivers were feeling the heat, both literally and metaphorically, as they completed two races under the lights of Iowa Speedway.

In the end, it was the best-known names that rose to the top. Team Penske got into the win column for the first time in the 2020 IndyCar season, and they did so in spectacular fashion: they swept the weekend with victories by Simon Pagenaud and Josef Newgarden. Plus, there were some truly devastating wrecks and one impressive TV broadcast booth debut.

1. Team Penske isn’t out of the picture

Let’s be honest: IndyCar fans knew that Team Penske wasn’t completely lost this year. While it was shocking to see them struggle over the first four races, it was only a matter of when the superteam would find their groove and get back to the form that everyone has come to expect. They did that and then some by sweeping the Iowa weekend just as Chip Ganassi Racing did at Road America.

And they did it with a pair of great, albeit completely opposite, stories as well. Newgarden dominated Sunday’s (July 18) race from the green flag, while Pagenaud’s victory on Saturday (July 17) came after pushing his way through the entire field. If Ganassi keeps up their solid runs, and Penske is finally in their proper space, we could see a really fun slugfest between the two teams in the remainder of the 2020 IndyCar season.

If you take nothing else away from the Iowa IndyCar 250s, come away with a pair of feel-good stories that prove how talented IndyCar drivers are—and how anything is possible. Watching Pagenaud drive from the back of the field not once, but twice to secure a win and a top-5 result is jaw-dropping and inspiring. So, too, was seeing Dixon’s Saturday night drive from mid-pack to second place and how he likewise came home with a top-5 the following night.

These two men are incredible drivers, who are both Indy 500 winners and IndyCar champions. Both of them took bad situations and turned them into great positives simply by putting their heads down, staying patient, and never giving up. Critics like to claim that IndyCar racing is about lucky cautions and fuel mileage, but what we saw at Iowa proves otherwise.

While cautions did play a factor, they were only one part of Pagenaud and Dixon’s great runs. They had to carve their way through the field, and know when to push and when to be patient, and both of them showed not only their speed but also their heart and their skill.

3. James Hinchcliffe has a second career

With Townsend Bell away from the NBC Sports broadcast booth, James Hinchcliffe got promoted from pit reporter to commentator for the 2020 Iowa IndyCar 250s, and did an incredible job.

Make no mistake about it—James Hinchcliffe should be racing. The NTT IndyCar Series is better off with him on the grid. However, since that’s not happening at the moment, the next best thing is having him in the booth. Hinchcliffe’s charisma and sense of humor are well-known among fans, but he was also an excellent commentator, bringing good information to the broadcast and explaining technical aspects in a way that was easy for everyone to understand. His commentary felt conversational and fun.

In fact, he put everyone else around him to shame. It was cringe-worthy when Paul Tracy asked Hinchcliffe about the piece of debris that struck Marcus Ericsson‘s car on Saturday by bringing up that Hinchcliffe had a similar situation in his career—leaving Hinch to point out that he was concussed when it hit him and therefore, no, he didn’t know what it was like. NBC Sports would do well to shake up their team and keep Hinch as a commentator.

(Although, you did have to love Bell’s brief appearance during the weekend, pointing out that he needed to get back to the booth because it was now occupied by an Australian and two Canadians. Touche.)

Great Racing. Much better than nascar ever is and not all the political crap, fines . I’ll never understand how the nascar
Current management allowed it to disintegrate into the JOKE it now is