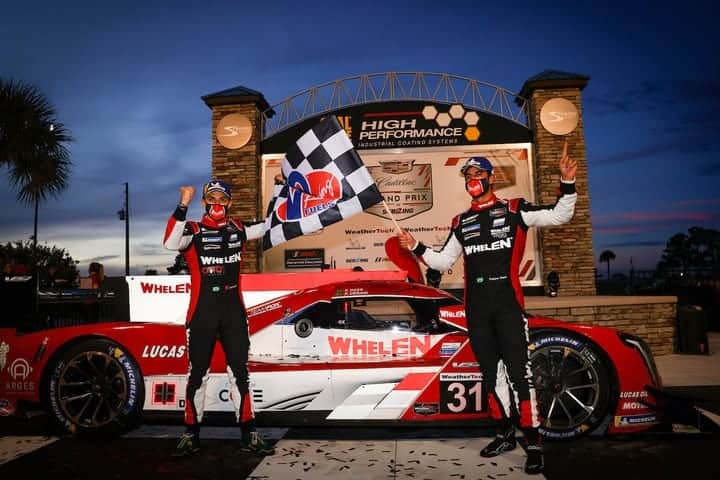 Action Express Racing’s Pipo Derani and Felipe Nasr dominated the proceedings Saturday (July 18) at Sebring International Raceway, leading 79 of 83 laps to win the Cadillac Grand Prix of Sebring.  For Derani, Saturday was his fourth career win on the bumpy circuit.

“I think this place likes me,” Derani said after the race.  “We had our first win last year at Petit Le Mans, and having those two races at Daytona not go our way was not what this team expected to win. My fourth win in five attempts [here] for me.  Not the 12 hours today, but I really love this place. Fantastic when you can roll out of the truck with the setup we have today.  Just a big, big thank you to the whole Whelen Engineering Cadillac team. And it’s great to have Felipe [Nasr] back as well.  It was a fantastic day for us.”

The race weekend was actually quite similar to last year’s Motul Petit Le Mans weekend at Michelin Raceway Road Atlanta.  There, the No. 31 team dominated the weekend, topping three of the four practice sessions, winning the pole and dominating the race.

The race started under threatening skies, as is typical for late afternoon in South Florida.  Despite this, no rain fell during the race.  Derani started from the pole and immediately began to stalk away from the rest of the pack.  Within 25 minutes, Derani had seven seconds on second-place Renger van der Zande.

Meanwhile, Acura Team Penske had boost with the No. 7 of Helio Castroneves early.  Loose fittings killed their power output.  Luckily, the Tower Motorsport by Starworks LMP2 entry with John Farano stalled on course with a fuel pump issue to bring out the race’s only full course caution (the first in a sprint race since VIR last August).  That limited the losses.  They would eventually get back onto the lead lap, but they finished seventh in class.

Derani continued to pull away from the pack until Nasr got into the car 80 minutes into the race.  Nasr, back after missing Daytona due to testing positive for COVID-19, showed no effects of the insidious virus.  He was able to match Derani’s pace and continue the assault on the rest of the field.

The margin of victory was a massive 36.432 seconds over Wayne Taylor Racing’s van der Zande and Ryan Briscoe.  JDC-Miller MotorSports’ Joao Barbosa and Sebastien Bourdais ran down and dispatched both of the Mazdas on the final lap to finish third, completing a Cadillac sweep of the podium.  Mazda Motorsports’ two Mazda RT24-Ps ran into fuel issues late.  Oliver Jarvis and Tristan Nunez were fourth, while the second Mazda of Jonathan Bomarito and Harry TIncknell were nearly a minute and a half behind in fifth, having coasted across the line after running out of fuel.

LMP2 saw PR1 Mathiasen Motorsports’ Patrick Kelly run off and hide at the start.  He managed to open up a 15-second lead on second in class prior to the first caution.  Afterwards, it was more of the same despite the varied pit strategies.  DragonSpeed chose to pit early to put Gustavo Menezes in the car in place of Henrik Hedman.  Remember that.

The strategy ultimately got DragonSpeed ahead of the PR1 Mathiasen Motorsports No. 52 with Spencer Pigot at the wheel.  Despite a brief off-course excursion, Menezes, who has been racing in the FIA World Endurance Championship’s LMP1 class for Rebellion Racing, proved to be too much for Pigot.  He was able to open up a 12-second lead and hold that to the finish, winning on track.

However, much like the GT Daytona class, the LMP2 class is a Pro-Am class.  As a result, the team’s amateur driver (Hedman) must complete a minimum of 45 minutes in the car in order for the team to earn points.  An official audit of timing and scoring discovered that Hedman entered the pit lane two seconds too early.  Because of that, Hedman was judged to have failed to meet the minimum drive time and the team was reclassified at the back of the class.

That gave the class win to Kelly and Pigot, who was driving in place of Simon Trummer.  Trummer is supposed to be full-time with the team, but also has driving responsibilities in the European Le Mans Series.  Kelly and Pigot ended up a lap ahead of Performance Tech Motorsports’ Cameron Cassels and Kyle Masson.  Era Motorsports’ Dwight Merriman and Kyle Tilley were third.

In GT Le Mans, Corvette Racing’s Jordan Taylor started from the pole, but it was Porsche GT Team’s Laurens Vanthoor that was on the move.  By the hairpin (Turn 7) on the first lap, Vanthoor had already dispatched teammate Frederic Makowiecki and both Corvettes to take the lead.

Vanthoor led until the first full course caution, where trouble struck at reduced speeds.  Everyone came in for their first stop of the day.  Everything seemed to be normal until it was time to leave.  Contact was made between the Porsches of Vanthoor and Nick Tandy (who had just replaced Makowiecki).  The contact ripped the nose off of Vanthoor’s No. 912, forcing him to make three additional pit stops for repairs.

Meanwhile, Corvette Racing chose to change only two tires on both cars here.  This allowed Taylor to re-assume the class lead.

The trouble continued for Porsche after the restart.  Tandy cut his right rear tire in Turn 1 and went off-course.  Crawling back to the pits at a reduced pace cost Tandy a lap.  Meanwhile, Vanthoor was handed a penalty for violating pit procedure.

The Porsche issues and the BMWs not being on pace with the Corvettes resulted in an easy trouncing.  The Corvettes drove far away from the rest of the class, which allowed them to settle things among themselves.

The race was ultimately decided in the pit lane.  With 70 minutes to go, the two Corvettes made their second stop of the race.  Here, Antonio Garcia took over the No. 3 from Taylor, while Tommy Milner replaced Oliver Gavin.  During the round of stops, Milner was able to jump Garcia and take the class lead.

Once out front, Milner was able to pull out to a decent lead.  In the closing laps, Garcia reeled Milner back in and was within striking distance on the final lap.  However, Milner held on to take the victory for himself and Gavin.

The two Corvettes were separated by just under half a second at the line.  Porsche GT Team’s No. 912 Porsche 911 RSR-19 for Vanthoor and Earl Bamber came back from their issues to finish third, 56 seconds back.  BMW Team RLL’s Bruno Spengler and Connor de Phillippi were fourth, while teammates John Edwards and Jesse Krohn were fifth.

In GT Daytona, the AIM Vasser Sullivan Lexuses shared the front row and drove away from the rest of the class at the start.  Frankie Montecalvo had the advantage early, but right before the full course caution, Aaron Telitz was able to get past Montecalvo for the lead.

The Porsches colliding in the pits negatively affected both cars as they were pitted in front of the Porsches.  The collision occurred right behind their pit stalls and delayed their exit.  That allowed Turner Motorsport’s Robby Foley to jump into the class lead.  Telitz ended up going from the class lead to sixth.  It took less than 10 laps for him to get to Foley and re-take the class lead.

The second round of stops allowed Scuderia Corsa to jump into the class lead with Toni Vilander at the wheel their Ferrari 488 GT3.  Meanwhile, Bill Auberlen in the Turner BMW and Jack Hawksworth were left to fight for second.

The fight came down to the final round of pit stops.  Hawksworth was able to win the race off of pit road and took the class lead.  From there, he opened up a decent lead.  Vilander made in roads late, but could not prevent Hawksworth and Telitz from taking their second straight class victory.

Telitz and Hawksworth’s margin of victory was 1.51 seconds over Scuderia Corsa’s Vilander and Cooper MacNeil.  Foley and Auberlen were third, followed by Riley Motorsports’ Lawson Aschenbach and Gar Robinson.  Montecalvo and Townsend Bell were fifth.

The next race for the IMSA WeatherTech SportsCar Championship will be at Road America on Aug. 2.  That race will air live on NBC at Noon ET.