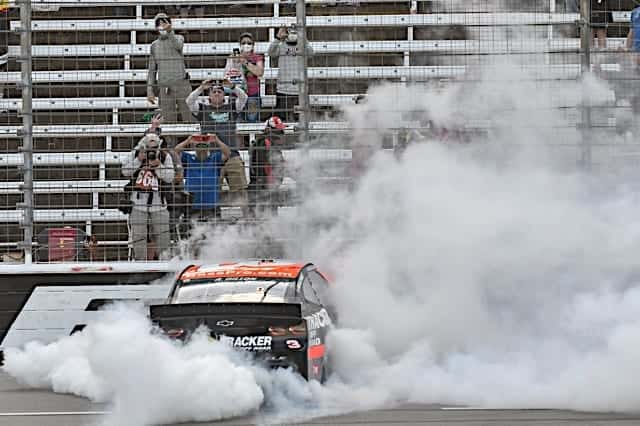 On a scorching hot Texas afternoon, Austin Dillon and Richard Childress Racing rode off into the sunset with a victory to savor in the O’Reilly Auto Parts 500.

Following a caution with 28 laps to go, Dillon’s crew chief Justin Alexander opted for two tires and teammate Tyler Reddick took none. The two RCR teammates took full advantage, holding on through three restarts for a 1-2 finish. It’s the first for the multi-car organization since 2011 at Talladega Superspeedway.

Dillon’s win Sunday (July 19) clinches a spot in the NASCAR Cup Series playoffs. Ten winners have now done so this season, including two straight from drivers outside the top 16 in points.

“1-2 for RCR, this has been a long time coming. We’ve had good cars all year,” Dillon said. “We definitely had to earn it and had to change it up a few times, it worked out for us.”

"Not bad for a silver spoon kid."

Up until the late-race caution, brought out by Quin Houff colliding with Matt DiBenedetto while trying to get to pit road, the race was Ryan Blaney’s to lose. Blaney led a race-high 150 laps and won the first two stages. But taking on four tires shuffled the Team Penske driver back before the ill-timed caution trapped him in traffic. The hard-luck driver finished seventh, a victim once again on a day he had the fastest car.

The incident shuffled up the pack and also ruined a potential longshot bid for the win from DiBenedetto. Running inside the top five before pit stops, the Wood Brothers Racing Ford driver took issue with Houff after the race.

This guy having zero awareness ruined our day. Had a very fast car at the end. Lovely https://t.co/AredQ1HAwO

Multiple contenders for the win also saw their hopes taken away, if not damaged, in the opening laps of the final stage. Blaney got loose off turn 4 on a restart and had to check up. Logano did so behind him and the bunched-up field accordioned in a 10-car melee that brought out the red flag. The drivers involved included Kurt Busch, Kyle Busch, Cole Custer, William Byron, Chris Buescher, Almirola, Ryan Preece, Matt Kenseth and Ricky Stenhouse, Jr.

Ryan Blaney gets loose and the field stacks up behind him. #NASCAR pic.twitter.com/huAuizyqyN

Dillon and Reddick were followed to the checkered flag by Joey Logano, Kyle Busch and Kevin Harvick. Erik Jones was sixth, closing to within 24 of the playoff bubble, followed by Kurt Busch. Brad Keselowski and pole sitter Aric Almirola rounded out the top 10.

The Cup Series now moves on to Kansas Speedway for a third straight points-paying race on a 1.5-mile oval. The Super Start Batteries 400 is scheduled for Thursday, July 23 at 7:30 p.m. ET with television coverage provided by NBCSN.

Even a blind squirrel finds an acorn once in a while. ?

It’s not as lucky as Asstin.

Will there be any positive RELIES for Austin Dillon? He is driving the majestic, noble number 3. Why isn’t treated like an anointed one?

Sometimes its better to be lucky than good….

That’s what Richard Petty said. Worked for him.

Besides the 1st RCR 3 Win in Texas in Any Shape, this also is the 1st Time the Signature RCR 3 would be part of an RCR 1-2 or Equal in Program History.