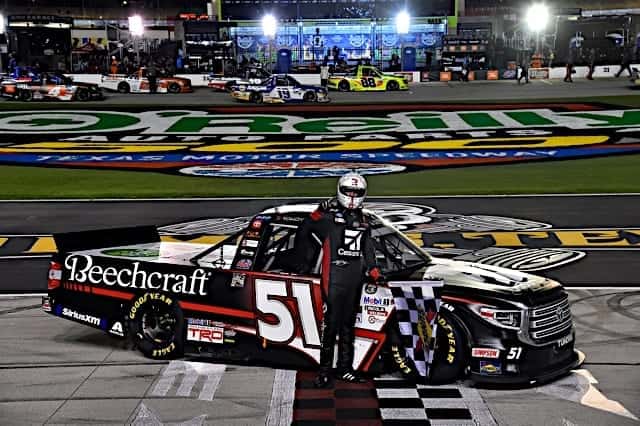 Kyle Busch lost a Texas Motor Speedway race earlier Saturday (July 18) after his NASCAR Xfinity Series car failed post-race inspection. But it took just a few short hours and one more race, the Vankor 250, to get over the heartbreak.

Sheldon Creed, who picked up his first career win last weekend at Kentucky Speedway in a rain-shortened event, and Grant Enfinger led the trucks to the green flag.

Kyle Busch spent no time working his way to the front after losing his Xfinity Series win to a post-race inspection failure. He took the lead as the leaders passed the line to complete lap 8 while Creed struggled with a flat right rear tire. Zane Smith, however, blasted by both of them, climbing to the top with less than 30 laps until the end of stage one. After a brief battle, Busch reclaimed the top spot, scoring the first stage win without any on-track incidents.

In stage two, Johnny Sauter, a five-time winner at Texas, blew his engine on lap 62, bringing his night to an early conclusion and bringing out the first on-track caution of the evening. With six laps to go in that stage, Jordan Anderson went around in turn 4, striking the outside SAFER barrier with his back bumper. That caused a restart with two laps left in the stage, a frantic finish where Brett Moffitt came out on top. Behind him, Derek Kraus and Tate Fogleman made contact on the backstretch during the last lap of the stage.

The final stage began on lap 88 with Christian Eckes and Zane Smith restarting on the front row. On lap 93, while in 10th position, Brennan Poole slipped into the wall while the race remained under green. Smith also touched the wall in between turns 1 and 2 with 32 laps to go, forcing him to return to pit road with a scuffed left side and a flat right rear tire. Smith wound up a disappointing 19th on the evening.

Up front, Busch held a comfortable lead until the yellow came back out on lap 153 for Todd Gilliland. Gilliland moved up the track, running into Ben Rhodes and causing both drivers to slam into the outside SAFER barrier. Rhodes then turned Gilliland on the straightaway, where he made further contact with the inside wall.

After the caution, Busch and Eckes restarted up front with 10 to go in the stage. The first restart laps were essentially a boss-to-pupil challenge as Eckes and Busch maintained their side-by-side battle for the lead. Busch finally took control with eight to go and pulled ahead in clean air. With that, Busch closed the deal after an eventful day of driving 367 laps total.

The Truck Series next heads to Kansas Speedway for the running of the Kansas 200, part of a doubleheader weekend for them at the 1.5-mile oval. The race is scheduled for Friday, July 24, with coverage provided by FOX Sports 1.