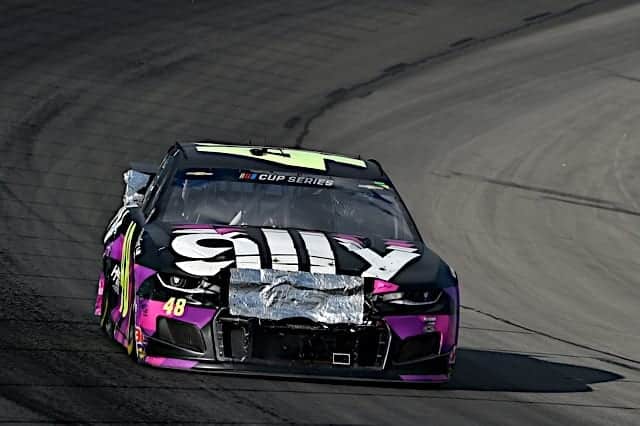 Jimmie Johnson wound up with another rough race in the O’Reilly Auto Parts 500, the latest blow in what’s been a difficult 2020 NASCAR Cup Series season.  Initially, a return to Texas Motor Speedway seemed to offer some hope of a good performance for the No. 48 team.  With seven career wins at TMS, all between 2012-2017, it was not long ago that Johnson was the man to beat in almost every race there.

He even looked fast in the early laps of the race on Sunday (July 19).  But on lap 117, Johnson got loose exiting turn 4 and slapped the wall, bringing out a caution.  To make matters worse, the No. 48 was held on pit road for two laps after too many pit crew members went over the wall to service the car.  From that point on, problems snowballed and he ended the race 12 laps down in 26th place.

Johnson’s saving grace was that Sunday’s race turned into a war of attrition in the latter stages.  At one point, the No. 48 was running in last place, but other drivers encountering trouble allowed him to move up the running order.  A major accident on lap 219 knocked several drivers out of the race and further aided Johnson’s efforts.  Even on a lousy day, he was able to salvage what may be some very crucial points down the road.

What will complicate matters for Johnson going forward, though was Austin Dillon’s surprise victory.  Heading into Sunday’s race, Dillon was behind Johnson in points and below the playoff cutline.  However, now Dillon becomes a virtual lock for the playoffs.  He will take up one more spot that Johnson and any of the other winless drivers cannot occupy.

How quickly the mighty have fallen. Johnson, a seven-time NASCAR champion, had never even failed to qualify for the postseason until last year.  Now, with eight races left before the 2020 playoffs begin, he finds himself in an even worse position compared to last year’s playoff miss.

At this point in 2019, Johnson was 13th in the overall standings with a 34-point advantage on the playoff cutline.  Given the veteran’s track record, he looked like a good bet to continue his 15-year postseason streak.  But in that final eight-race stretch, the No. 48 team fell apart.  Back-to-back 30th-place finishes wiped out Johnson’s cushion over the cutoff.  The No. 48 team tried to claw its way back into contention and even made a crew chief change with Cliff Daniels taking over.  But it was all too little, too late.  A crash in the Brickyard 400 ended Johnson’s last chance to secure a win and punch his ticket to the playoffs.

This season, Johnson’s last as a full-time racer, he and his team have experienced similar setbacks.  Some of them have been completely out of the driver’s control.  Johnson was disqualified from his second-place finish in the Coca-Cola 600 when the rear alignment of his car did not pass the OSS in post-race inspection.  He also missed this year’s Brickyard 400 entirely due to testing positive for COVID-19, replaced by Justin Allgaier.  Johnson would be the first to tell you NASCAR is a team sport, but several of the No. 48’s missteps have been bad breaks or errors not of his making. No one’s going to blame a driver for getting involved in the Daytona 500 Big One.

That said, there are other instances this year where the 44-year-old has not performed up to his usual standard.  Johnson slid out of the groove and lost control all on his own Sunday, something that used to be unthinkable for this future Hall of Famer.  His team made matters worse trying to fix the car, but none of their mistakes would have happened if Johnson hadn’t crashed in the first place.

Errors that Johnson would not have made in the past seem to be popping up with more frequency in 2020.  Last weekend at Kentucky Speedway, he threw a late block on Kevin Harvick while restarting third late in the race and got spun through the infield.  He wound up 18th instead of what could have been a top five, or a top 10 at worst.  And in the first race this year at Darlington Raceway, Johnson crashed out while leading after trying to pass a lapped car with just half a lap to go before the end of the first stage.  It was a senseless error by a driver who has made a career out of rising to the challenge while watching his competition collapse under pressure.

If Johnson expects to make the playoffs in 2020, he will need to recapture some of that old magic.  Winning a race would be the most direct route to the playoffs, though he has not won a points-paying event in three years.  Next month’s pair of races at Dover International Speedway will be Johnson’s best chance to win, though he has looked off lately at even his best tracks.  It would not be impossible for Johnson to finally break the drought, but the No. 48 team is in a position where it cannot count on a timely win to advance to the playoffs.

A more realistic goal would be for Johnson to reel off a string of top-10 finishes, the kind of runs that used to carry him to championships.  It would not guarantee him a spot in the postseason, but it would at least give him more control over his own destiny.  If Johnson and his team can bring fast cars to places like Kentucky and Texas, the playoffs are within their grasp.  Running the Daytona infield road course and the always unpredictable speedway oval to end the season is a serious challenge, but Johnson’s wealth of experience should prepare him for those races better than most.  All he has to do is avoid the mistakes that have plagued him throughout 2020.

If Johnson can step up and qualify for the playoffs one more time, it will make up for all the No. 48 team’s issues this year.  He may not last long in the postseason unless his team dramatically improves (a concern for another day).  Rallying to make the playoffs over this final stretch of races, though would be a vintage Jimmie Johnson moment. It’s a sign that Father Time has not defeated him.

Johnson may not be in his prime anymore, but he has proven time and time again why he is one of NASCAR’s all-time legends and arguably the greatest driver ever.  Usually, betting against him is a bad bet. Can he get it together before time runs out?

He can’t. He never would have without the help.

Time for Jimmie to step OUT. Actually, past time. He should have retired last year.
Every dog has his day and that day is done.

It seems like he’s just biding his time, very similar to Junior in 2017.