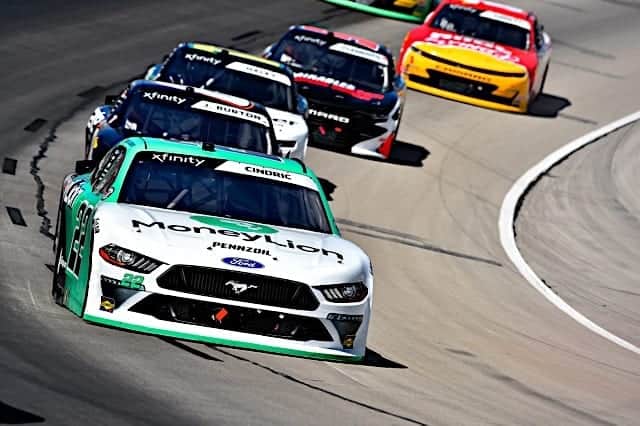 It is commonly said that everything’s bigger in Texas. Saturday’s (July 18) My Bariatric Solutions 300 at Texas Motor Speedway certainly lived up to that expression. Whether it was the heat, the speed, the slickness of the racetrack, or the Big Hoss jumbo screen monitor on the backstretch, this race delivered from the start.

Kyle Busch’s 98th career Xfinity Series win would’ve been another big moment to come out of Saturday’s barnburner. But issues in post-race inspection with the left-rear section of his No. 54 Toyota Supra stripped him of the victory, handing Austin Cindric his fifth career victory instead.

Busch started 28th, overcame a speeding penalty on pit road and led just 15 laps on his way to the front. The 2009 series champion showed again why he is a constant threat at Texas. But after his post-race disqualification, Busch’s win total remains at 97, and his win total at Texas remains at nine.

Nonetheless, Cindric’s No. 22 Ford Mustang was stellar in the blistering Texas heat. Cindric led 44 laps and had nothing short of a race-winning car. The win is Cindric’s third straight, matching the feat achieved by Dale Earnhardt Jr. in 1999 and Christopher Bell in 2018. And the fact that it was done on a mile-and-a-half speedway yet again, gives the Mooresville, NC native a ton more confidence heading into Kansas Speedway next Saturday.

Not only do Cindric’s three straight wins show how stronger he’s becoming on the track in general, but it shows how these mile-and-a-half circuits are starting to become his second forte, next to road courses. Out of the eight races run on these tracks in 2020, Cindric has an average finish of 4.5, and has finished outside the top-5 only twice. Even though the championship finale won’t be held at a mile-and-a-half oval this year, you can still expect Cindric to use these racetracks to claim as many stage wins and race wins as he can going into the playoffs and beyond.

Despite hitting the turn four wall on lap 74 and receiving right-side damage, Ross Chastain was still able to have a decent outing at Texas and keep an important streak alive. With his 9th-place finish on Saturday, Ross Chastain was able to add onto his streak of consecutive top-10 finishes with nine. An excellent display of making lemonade out of lemons by Chastain and Kaulig Racing. Or making watermelon-ade out of watermelons, if that’s a thing.

It looked as though everything would finally fall into place for Justin Allgaier and the No. 7 JR Motorsports team. He won both stages, and led the most laps in the race with 98. But Allgaier’s one error that resulted in his dominating day going south was advancing a foot or two off the apron after completing a green flag pit stop . Allgaier would be forced to serve a pass-through penalty on lap 170, falling a lap down. A timely caution with five laps to go helped Allgaier get back on the lead lap and miraculously collect a third-place finish. But missing out on potential victories time and time again is sure to be a stinging feeling that Allgaier no longer wishes to have.

The notorious summer slump just cannot seem to let go of Riley Herbst. Or vice versa. Just as soon as Herbst is able to find a glimmer of hope, such as his second and tenth-place finishes at Kentucky Speedway, he is met with more misfortune. On lap four, Herbst received just a bit of contact from Noah Gragson, leading to his No. 18 Toyota Supra sliding up and backing into the turn 4 wall. After making a brief return to the track before failing to make minimum speed, Herbst would go behind the wall for good and finish 36th. This result drops Herbst to 10th in the standings, just 55 points ahead of 12th-place Brandon Brown. And should he encounter more bad days in the weeks to come, the possibility of the Las Vegas native missing the playoffs may arise.

One team that deserves an ‘atta boy’ leaving Texas is JD Motorsports, with two of their drivers each managing to score top-15 finishes. Jeffrey Earnhardt, who ran a full season for the team in 2014, picked up a solid 12th-place finish, the first car one lap down. And in 14th-place was rookie driver Jesse Little, out of Sherrills Ford, N.C. This is the third straight race that Little has finished in this position, going back to both races at Kentucky Speedway last week. Little scored one top-10 finish at Pocono, and leaves Texas Motor Speedway 16th in the driver’s standings.

“He’s (Noah Gragson’s) got a lot more to lose than I do, so we’ll see what happens.” – Riley Herbst

“Obviously great to get the MoneyLion Ford Mustang in victory lane, no matter how it happens. Great points day!” – Austin Cindric

Texas Motor Speedway has been chewing up cars and spitting them back out since 1997. Seen in Saturday’s event was just how sensitive these cars can be on this racetrack. Incidents involving Riley Herbst, Kody Vanderwal, Anthony Alfredo and Noah Gragson, showed how much their cars reacted to the air around them with little to no contact made by others. No amount of aerodynamic preparation can prepare anyone for the sensitivities they may face while negotiating around this place. Combine that with the massive amount of heat reducing the grip in the track during the day, and you have a racetrack that can potentially be quite unforgiving. If you never considered Texas Motor Speedway to be a wild card race in the playoffs, you may want to think again. And when that time arrives, Austin Cindric will show up with plenty of strength on his side.

The Xfinity Series will travel to Kansas Speedway on Saturday, July 25, for the fourth consecutive race on a mile-and-a-half track. Austin Cindric will seek his fourth straight win. Racing action from Kansas is scheduled to begin at 5:00 p.m. ET, and will be televised on NBC Sports Network.