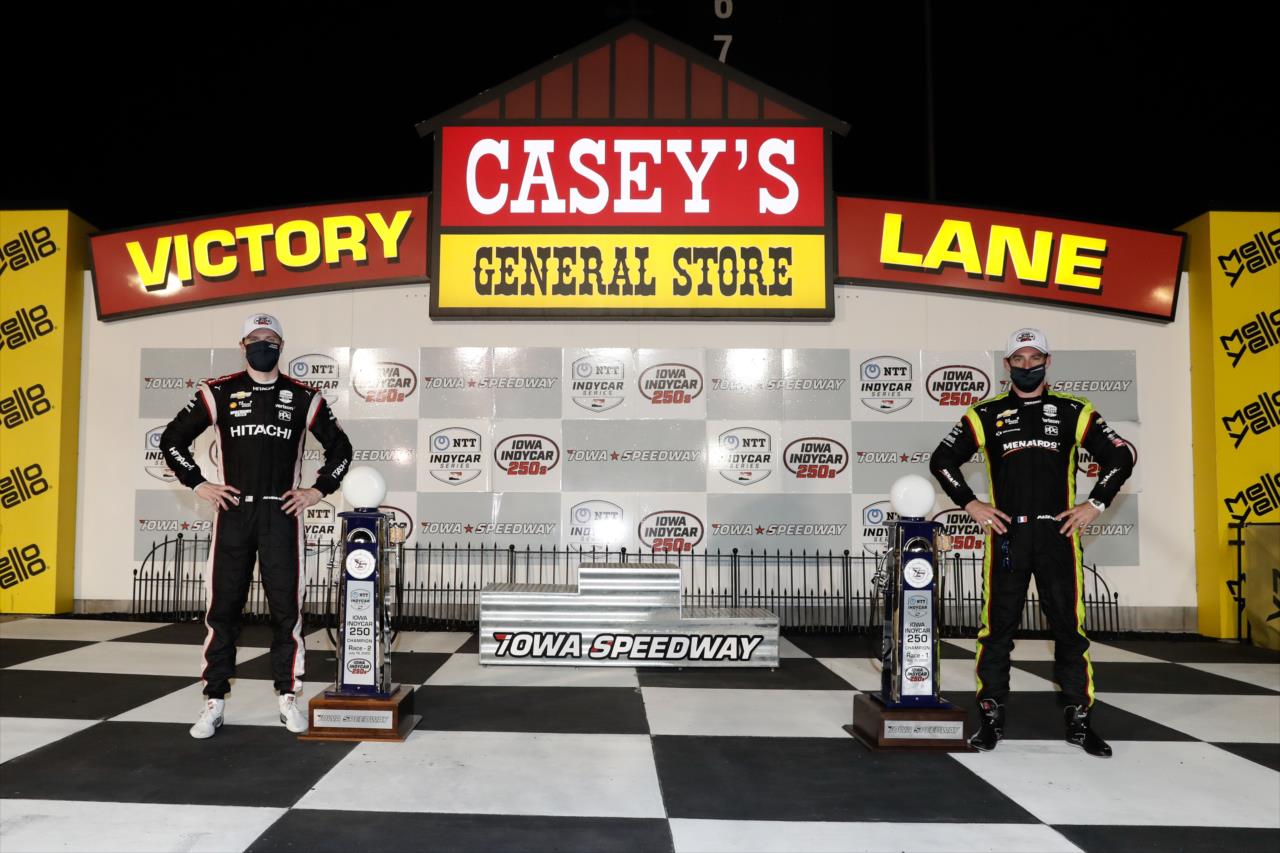 Even after two tough races at Iowa, Dixon remains the driver to beat in the 2020 IndyCar season with 244 points. He qualified back in 17th for Race 1 and 18th for Race 2 and still managed to capitalize on yellow flags and pit stop strategy to finish second and fifth respectively.

Dixon’s consistency is his greatest asset. When he’s not winning, he’s maintaining a streak of strong finishes. Iowa has never been the five-time champion’s favorite track, so the fact that he was able to come out on top after a doubleheader there is a great advantage. August’s upcoming races, Mid-Ohio and the Indianapolis 500, are right in Dixon’s wheelhouse. His competition will have to be in peak form to mount a significant challenge for the 2020 IndyCar championship.

Runner-up finish for the Iceman marking his 4th podium of the year. ?#BankOnThe9 | #Iowa250s pic.twitter.com/3D8yCZnUHa

Simon Pagenaud didn’t qualify and had to start from the rear of the grid for both of the Iowa 250s, but the Frenchman’s win on Friday followed by his fourth place on Saturday have kept Pagenaud firmly in contention for the Astor Cup. His 195 points is enough to rocket him from last week’s fourth place in the IndyCar standings to second overall.

Pagenaud is Dixon’s closest competition, but he’s going to need to put together a stronger, more consistent season to compete for the title. His performance on ovals has been great; however Team Penske has been up and down in its performance all year, and tere are no guarantees that the team will continue on its upward trajectory. Pagenaud himself will have to prove that he’s able to take charge on longer road courses.

? Corn crepes are on the menu tonight! What a feeling! #indycar #NeverGiveUp pic.twitter.com/kNMF2bCTo8

The defending NTT IndyCar Series champion had a very up and down start to his 2020 campaign, but Josef Newgarden finally prevailed at Iowa Speedway. A fifth place followed by a win—the exact opposite of his Penske teammate Pagenaud—secured him third place in the overall championship at 191 points.

Newgarden has only finished out of the top 10 once this season and looks to be in a position to start building up his performance. That being said, he’s already seen one other possible win slip away due to an untimely caution flag and Team Penske hasn’t been immune to the pit stop problems and mechanical errors throughout the IndyCar paddock. He, like Pagenaud, will have to find consistency to remain in the title picture.

Incredible job by the @team_penske crew! We’ve had some bad luck the past few events but they never stopped pushing. Thank you!

Patricio O’Ward‘s weekend at Iowa left a lot to be desired. He almost finished on the podium in Race 1, then spent much of Race 2 challenging Newgarden for a win until a poorly-attached tire set him back over 10 positions. He ultimately took the checkered flag in 12th. While he only dropped one position in the IndyCar standings—from third to fourth with 162 points—just one tough race can be enough to deprive a driver of his Astor Cup hopes.

Arrow McLaren SP is in incredible shape this year, and O’Ward has looked capable of securing a win more than once before outside factors came into play. If the team can get its cars into shape and O’Ward can finally get a victory, he can pick up valuable points and potentially overtake the Penske drivers on the leaderboard.

What could’ve been.. we win and lose as a team.This one hurts, but we will come back stronger.Thank you all for the messages of support.

Best of the Rest

Graham Rahal and Will Power are currently tied for fifth place with 142 points in the championship standings. Their years have looked very similar: both drivers have been competitive and have had fast cars, but something ultimately stands between them and victory. Each of them made improvements by snagging a podium finish in Iowa Race 2, but both finished outside the top 10 in race one.

By this point in the season, Rahal and Power are over 100 points behind Dixon. There’s still time to make it up, but they’re approaching long shot territory as we near the halfway mark of the 2020 IndyCar season. If Rahal and Power aim to get back in the 202 IndyCar championship fight, they’re going to have to eliminate mistakes, which their teams haven’t been able to do so far.

Great night in the @HyVee car!! Finished the long stretch of races on the podium and good momentum heading into the home race at @Mid_Ohio! Raised just shy of $25k for #TurnsForTroops!@RLLracing @UnitedRentals @IndyCar pic.twitter.com/RMyCfPyOTs