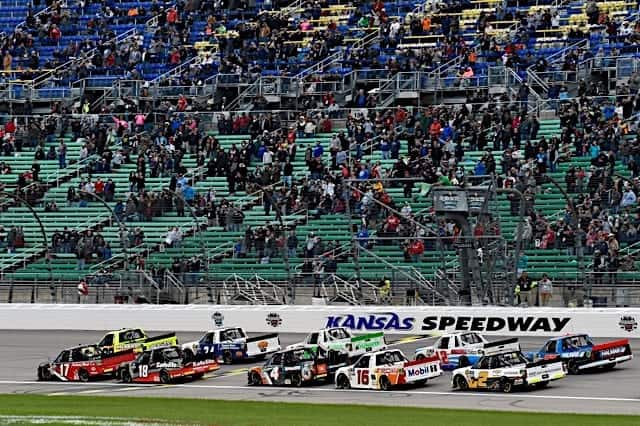 The NASCAR Gander RV & Outdoors Series has released its entry list for the doubleheader at Kansas Speedway. 39 trucks are on both entry lists, meaning all trucks will make the race, barring any entry list changes.

Dawson Cram will drive the No. 00 in the first race, while Kevin Donahue will pilot the truck in race two.

Korbin Forrister is back in the field with his No. 7 truck.

Chase Purdy will return to his seat in the GMS Racing No. 24.

FDNY Racing returns with Bryan Dauzat behind the wheel of the No. 28 truck.

The No. 33 for Reaume Brothers Racing will have Donahue in the first race and Ryan Huff in his series debut in the second.

Ross Chastain will shift from the No. 42 truck to the No. 40 truck.

Brandon Jones will look to get back-to-back wins in the No. 51 truck.

Ray Ciccarelli will drive the No. 83 CMI Motorsports truck.

Robby Lyons will be back in the for the second and third time this season, driving the No. 97 truck.

Jared Haas joined the Frontstretch staff in May 2020. A graduate of Cedarville University in December 2019, Jared has been a Nascar fan since 2006. One of Jared's passion is recreating and creating Nascar cars for video games.
@RealJaredHaas
Previous Backmarker Blues: What’s Wrong With All These IndyCar Pit Stops?
Next Entry List: 2020 Kansas 150