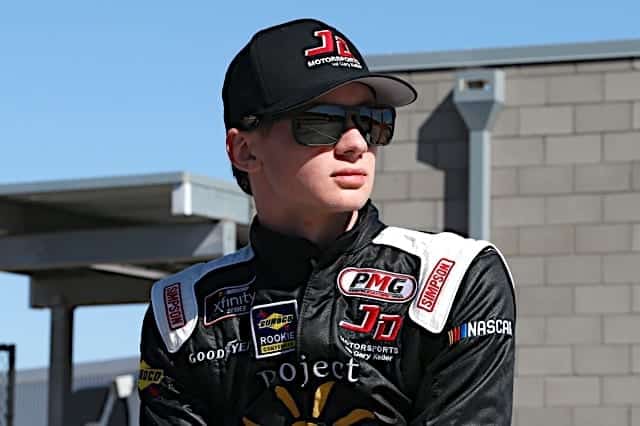 Prior to the 2020 season, the name Colby Howard was foreign to the casual fan of the NASCAR Xfinity Series. The South Carolina native is trying to change that, running a partial schedule with JD Motorsports this year.

Howard, 18, has grown up around racing. His grandfather, Buddy, was a multiple-time track champion at Greenville Pickens Speedway. Rodney, his father, competed at the local levels, making it to the then-Busch Series in 1983, scoring five top-10 finishes that season.

But Howard, himself, has been competitive in motorsports from the age of six, beginning his career on dirt bikes. He stayed on two wheels until he broke both his collarbone and femur in an accident. At 12 years old, he made the transition to four wheels; starting off in bandoleros and quickly moving up the ranks to mini-stocks, limited late models and pro late models prior to turning to NASCAR.

By running in the desert and in the season finale at Homestead-Miami Speedway, Howard was licensed to run in Xfinity part-time for JDM.

“I questioned it, definitely,” Howard recently told Frontstretch when asked about moving to Xfinity. “It’s the second-tier of NASCAR, and it’s a really big series. There’s a lot of really talented drivers, but I questioned it.

“Our plan this year was don’t go out and set the world on fire, don’t try to do something over your head, but to just ride and get experience and don’t tear the cars up.”

Through his first 10 series starts, Howard has shown flashes of genuine speed. He earned his best finish in early June at Atlanta Motor Speedway, placing 15th. That was the second race of a four-week stretch where he cracked the top 20.

Since then, he was involved in a crash at Kentucky Speedway, racing hard with Anthony Alfredo inside the top 20. He also had a DNF in his debut Xfinity race at Phoenix, wrecking out on lap 85, and the No. 15 car overheated in May at Charlotte Motor Speedway.

But given that the sport shut down following his debut at Phoenix, Howard got to thinking about his place in Xfinity.

“After that [Phoenix], the pandemic hit, it made me question, ‘Should I be here, should I be out here running in the Xfinity Series with these guys after I just tore up a car in my debut,'” Howard said. “I got really down on myself about that and really questioning, ‘Should I be here?’

“We went to Darlington [Raceway] with the mindset of just finishing the race and riding and doing whatever we can to keep the car in one piece. We’ve had that mindset going into these last couple of races. I think it’s getting better.”

Given NASCAR’s practice and qualifying restrictions, Howard’s first time on a racetrack is when the green flag drops for the race. That’s a challenge for any driver, let alone someone who’s never been to the track.

“[Not having] practice definitely hurts you,” he added. “Going into a car like this, at tracks like this, I haven’t ran but six or seven mile-and-a-halves now and just now starting to get comfortable in the car. I’m starting to feel that edge of where to push it, where not to push it.”

Because of his inexperience, Howard has leaned heavily on his veteran teammates BJ McLeod and Jeffrey Earnhardt. He credits their guidance for his solid results.

“I think the biggest way I’ve been able to help him is being able to answer questions about the tracks; preferred lines, lift points and different things like that to help get him up to speed,” McLeod said. “I’ve just tried to be here to make sure whatever experience I have and the things I can give to him and help him speed up his learning curve.”

Howard is represented by Performance Marketing Group (PMG), whose goal is to rush drivers up the ranks, similarly to what it did with Quin Houff, who’s running the full NASCAR Cup Series schedule with StarCom Racing. While Howard had self-doubt on whether he should be in the second-highest tier of NASCAR racing, the ultimate goal is to get to Cup.

“They work with drivers that don’t have a lot of money to spend, so we try to do it as fast as possible to get me to the Xfinity and Cup series,” Howard said. “I just did the Truck races last year to get my approval.

“We actually planned on doing a full-time Truck season. We were talking to a couple of truck teams but couldn’t get anything worked out. […] I don’t have the time or money to spend on a full year of ARCA, full year of Trucks and that kind of thing.”

Johnny Davis, team owner of JD Motorsports, admits he took a chance on Howard due to his lack of experience, but believes in his talent.

“We took a little bit of a chance on him,” Davis stated. “He’s shown that he’s got as much as talent as anyone [we’ve ever had], I think. To do what he does and never have driven around those racetracks until he’s in the car to take the green flag, he’s doing an exceptional job.”

Davis also believes Howard has a solid future in NASCAR.

“[Howard’s] a racer, he’s the real deal,” Davis added. “He takes it to heart, he gets involved in it. He goes to the shop every week trying to learn more. I didn’t figure we’d have it as consistent as we are. It’s a little bit surprising, but now my goals are higher than they were. I think he can have some top 10s now.”

As a team, JDM has just one top-10 finish this season, when Jesse Little finished 10th at Pocono Raceway last month.

As Howard’s first year in Xfinity continues, he’s hoping to pilot the No. 15 to more consistent finishes. Currently, he holds an average finish of 24.2.

“I definitely want to get back on track, which is just being smart and making smart moves and getting better,” Howard said.

With the Xfinity season approaching the halfway point, Howard’s halfway done with his set schedule of 20 races. He’s got 10 races left on the calendar and won’t be at Kansas Speedway this weekend, as Ryan Vargas will pilot the No. 15 car for JDM.

Another driver with plans to get rushed to Cup. Wonderful.

Stay in Your Lane. Jill P.Colby I Will Be Rooting for You Young Man. You Have Talent Behind The Wheel. Best OF Luck !!!!