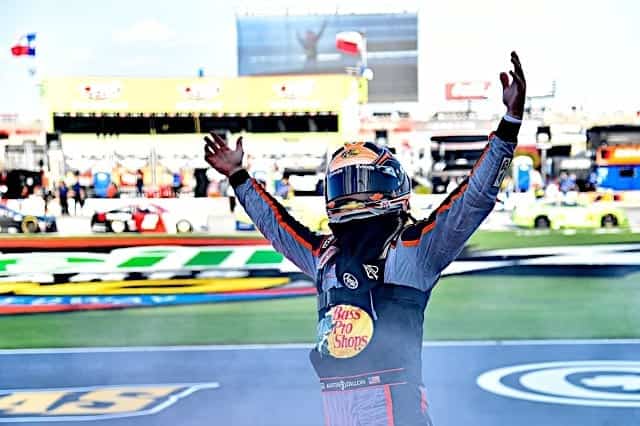 In this week’s edition of the Frontstretch Podcast, Dustin Albino and Mike Neff discuss Richard Childress Racing sweeping the top two spots at Texas Motor Speedway over the weekend, via pit strategy.

Austin Dillon was victorious holding off RCR teammate Tyler Reddick. How big was this 1-2 finish for RCR as both teams make a push toward the playoffs?

Meanwhile, Quin Houff was at the center of attention late in the race, making a bonehead decision to pit from the middle lane, triggering a multi-car incident. Post-race, Brad Keselowski noted he’d like to see a graduation process to the NASCAR Cup Series as well as possible demotions for drivers that don’t perform. Albino and Neff give their hot takes on this topic.

Albino and Neff also reflect back on last week’s All-Star Race, discussing their feelings about the underglow and the numbers pushed back on the doors. Oh, and they can’t forget about Michael McDowell intentionally wrecking Bubba Wallace in the All-Star Open.

Finally, Dillon joins the show to discuss his victory at TMS, why it meant more than winning the Daytona 500 and Coca-Cola 600 and what it proved to himself, among other topics.

Many, many drivers have done what Quin Houff did on Sunday. Yes, it changed the complexion of the race, but I think people are being way too hard on the kid. He was brought up before he was ready, so he’ll have to learn and the other drivers will have to “help” him.

It reminds me of the move of one of “the best stock car drivers in the world” who came out of the pits and drove straight into the lower racing groove during a restrictive plat event in front of the lead pack.

Yeah, wasn’t that the guy who builds racing seats. It was like watching the beginning of a train wreck.