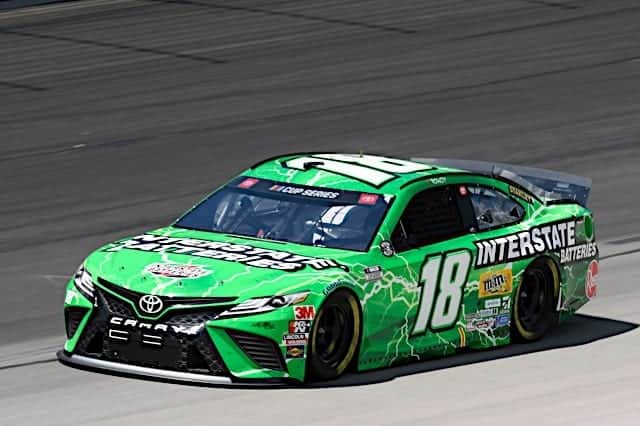 The younger Busch is the biggest surprise on the list, simply because it defies logic that he is on a list of winless drivers to begin with. Busch seems to be the driver most affected by the lack of practice on race weekends, and that is a concern going forward, as teams won’t have practice sessions for the remainder of the 2020 season.

But it’s not like Busch hasn’t had good runs, and he’s probably got the best cars of any driver on this list. He’ll actually have a bit of an advantage when the NASCAR Cup Series hits the infield road course at Daytona International Speedway next month; he ran the most recent Rolex 24 race there, making him one of a small handful of drivers with any experience at all on that layout. It came in a totally different type of car, but he’s a versatile enough driver to translate as much as he can. Busch will make the playoffs, and he will probably do it with a win.

Almirola had a shaky start to 2020, but he’s been the model of competitive consistency this summer. In the last seven races, Almirola has finished no worse than 10th, leading 228 laps in that same span. Running like that, it’s hard not to see Almirola breaking through at some point.

Almirola has six top-10 finishes at Kansas Speedway, the most he has at any non-superspeedway track. But he’s also an outstanding superspeedway racer — both of his Cup wins to date have come on NASCAR’s biggest circuits. The cutoff race this year? The oval at Daytona. Almirola is going to make the playoffs either way, but a win would certainly boost his cause.

The difference between Reddick being on this list and not might just be two tires. Reddick elected to take no tires on his final pit stop at Texas Motor Speedway last weekend, while his Richard Childress Racing teammate Austin Dillon elected for two, and that might have been the deciding factor in the race. (Interestingly enough, team owner Richard Childress said that both calls came from the team’s “command center,” where the owner was watching the race. Read into that what you will.) Had he won, this conversation would not be happening.

But it is, so … you have to like Reddick’s chances Thursday night, July 23, in Kansas. He does have one previous Cup start there, with a ninth-place finish to show for it last spring, and he’s certainly got momentum on his side after his run at Texas Sunday. It’s not his only chance, though; Reddick has NASCAR Xfinity Series wins at both Michigan International Speedway and Daytona, both of which the series visits in August. A win is the next logical step for Reddick, whose rookie campaign has been stellar.

DiBenedetto is in the best position of his career to win, and, equally important, in the last couple of years, he’s gained experience in racing for wins with competitive cars. That’s an important step in a driver’s education, and he can’t make it if he’s not in competitive equipment. This year, DiBenedetto has had cars capable of racing at the front, and he’s shown he can hold his own. He has the benefit of Team Penske equipment, and Penske’s three drivers all have wins this year.

DiBenedetto has shown he has chops at the short tracks, but this year he’s shown he can handle the intermediates, often the hardest to get a handle on, as well. After finishing third at Kentucky Speedway, DiBenedetto had a top-10, if not a top-five car before getting caught in an incident that was not his fault. If he rebounds at Kansas, he’ll be in the mix Thursday night. He’s also been solid at Daytona, so don’t count him out of that one, either.

Busch is a bit of a tougher sell than the others on this list; it was close between him and Jimmie Johnson for the final spot. Johnson has had cars that are lightning fast at some tracks this year and was among the fastest last week at Texas. But Busch has been far more consistent, while Johnson has had terrible luck at the tracks where he’s been good enough to win, and a lot of it has been his and the No. 48 team’s own doing. So, while Busch hasn’t looked really close to a win, he doesn’t look really far away, either, and there’s nowhere he’s bad.

Busch has had excellent finishes just about everywhere; the list of tracks where he hasn’t won is short. Of the remaining regular-season tracks, Busch has been outstanding at Michigan, with three wins and almost 500 laps led. He’ll make the playoffs either way, but he won’t settle for just getting by if he can help it.

Good article and good selections. I’m going to throw another one out there for consideration, though: William Byron. We still have a month of racing left and this kid has a winning crew chief. He needs a bit of luck, but he has the talent and capability. We’ll see…