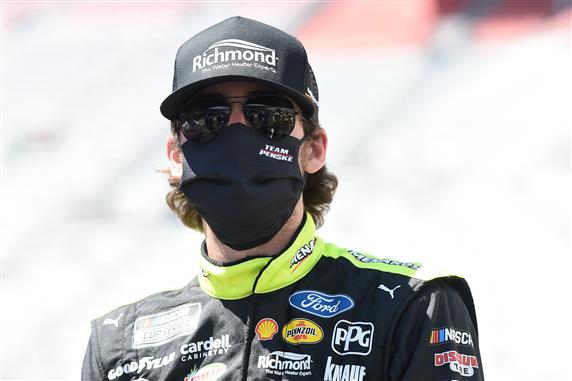 When I was a NASCAR reporter for SI.com, I used to do a midseason segment called “The Bowlesy Awards” that evaluated the NASCAR Cup Series from time to time. We’re bringing them back here in 2020, with a little refresh, as NASCAR midseason awards while taking a closer look at where the sport stands five months into the weirdest season of its 71-year history. (COVID-19 will do that to you.)

So, without further ado….

The David Pearson Award (Hardest Charger): Ryan Blaney. Will 2020 be the year Blaney turns into a true title contender? He’s already led more laps (497) than he did throughout all of 2019. Team Penske’s youngest talent has led in 12 of his 18 starts this year, posting a win at Talladega Superspeedway with a dazzling late-race performance.

But what makes Blaney stand out this year is sustained speed throughout all parts of the race. He leads the series with 196 stage points, posting three stage wins to leave him second in the overall standings. He’s the fastest driver in long green-flag runs, according to NASCAR’s loop data stats, and is fastest on restarts by a country mile (Second-place Joey Logano is a whopping 3.0 behind Blaney’s rank of 8.056). All of a sudden, the No. 12 is lurking up front at virtually any type of track. If Blaney can shake those bad luck demons come playoff time, a championship is within reach.

The Tim Richmond Award (Comeback Driver Of The Year): Denny Hamlin. How can a 2019 Championship 4 participant become the Comeback Driver of the Year? Simple: when he’s spent an entire career one step away from emotional train wreck.

For years, the knock on Hamlin was his confidence would get crushed all too easily. And what bigger hurdle to overcome than a 2019 title that slipped out of his grasp? Hamlin entered Homestead-Miami Speedway the sentimental favorite but lost due to the most mundane of adjustments: extra tape on the grille. That’s right; a poor call by crew chief Chris Gabehart overheated the car just as it was starting to flex some muscle.

The old Hamlin? He would have spent the offseason sulking and entered 2020 slumping. Instead, he came out of the box swinging, winning the sport’s Daytona 500 and firing off a series-best four wins (tied with Kevin Harvick). Take back a tire failure at Indianapolis Motor Speedway and he has five, including a win from the pole at the same Homestead-Miami Speedway track where he lost in November. Gabehart has this driver clicking like we’ve never seen, comfortable in his own skin, and they feel like a shoo-in for a second straight crack at the title.

The Where Did He Come From Award (pleasant surprise): Matt DiBenedetto. Once again, this perennial overachiever is a Cinderella story after moving to the Wood Brothers Racing No. 21. DiBenedetto’s got five top-10 finishes, a career-best average finish of 14.6 and is in position for a first-ever playoff berth, sitting 12th in points. The 28-year-old remains one of the best follows on social media and is incredibly popular with the NASCAR fan base. So why is he always on the hot seat? A one-year contract means he’s in peril again with Penske protege Austin Cindric excelling in NASCAR’s Xfinity Series.

It’s absolutely baffling if that’s the case. You know that hotshot rookie that replaced him at Leavine Family Racing? Christopher Bell? Matty D had a better average finish in the No. 95 last year (18.3) than Bell’s 19.8 thus far despite a higher level of technical support and funding for Bell.

The Buckshot Jones Award (biggest disappointment): William Byron. Some will argue Kyle Busch should get the nod here but 2020 hasn’t been a total disaster (four wins in Xfinity and the Gander RV & Outdoors Truck Series). Byron has some victories, too, becoming the star of NASCAR’s iRacing experiment during the COVID-19 quarantine.

But three victories there raised expectations for the real racetrack. And since NASCAR’s return, it’s been an absolute disaster for the 22-year-old who’s now on the wrong side of the playoff bubble. A driver with seven-time championship crew chief Chad Knaus doesn’t have a single top-five finish through 18 races. In 90 career starts, he has yet to win in a car Jeff Gordon was taking to a championship by this point. When you drive for the equivalent of the New York Yankees, those numbers in year three just don’t pass the test.

I do think Byron’s shown raw talent at the sport’s lower levels (11 wins and a NXS championship). It’s clear he has what it takes; I wonder if racing down there more would build confidence? (Byron hasn’t run in NASCAR’s lower series since 2017).

Right now, the concern is Byron’s more Logano-with-Joe Gibbs Racing at this point where a change of scenery and chemistry might be needed. The next 18 races are pivotal here for the long-term.

The Richard Petty Award (best points racer): Kevin Harvick. Different year, same old story for a driver who’s still in the prime of his career at age 44. Harvick’s average finish of 6.6 not only leads the series, it’s one of the best starts in NASCAR history. He’s got 17 top-15 finishes in 18 races, completing a whopping 4,919 of 4,921 laps.

Already, The Closer has racked up four wins before we’re even in crunch time, a list that includes NASCAR’s first race back from COVID-19 at Darlington Raceway along with a second straight Brickyard 400. Repeating these results in 2020’s second half would put him in rarified air. 6.6 would be the best average finish in the sport’s postseason era (2004-present) and the lowest since Jeff Gordon’s 5.7 in 1998. Gordon won 13 races that year in a season that’s arguably the best in the sport’s history. If you’re putting up those types of numbers, there’s no question you’re the title favorite, even in a one-race-take-all format.

The Jayski Award (best Silly Season move): Penske crew chief swap. In a year that saw below average driver musical chairs, the best moves came on top of the pit box. All three driver/crew chief combinations appear to have worked like a charm for Team Penske. Jeremy Bullins has brought a level of aggression that jives well with Brad Keselowski; a contrarian style has led to two wins and keeps them in the title chase with the third-fastest car in that program.

Paul Wolfe, meanwhile has brought a steady hand to Joey Logano after the driver wobbled a bit last season. And Todd Gordon is working his mentorship magic on a young driver all over again in Ryan Blaney. This trio of head wrenches racked up six wins throughout all of 2019; halfway through 2020, they have five.

The Breaking News Award (biggest story to watch): The 2021 schedule. COVID-19 has wreaked havoc on NASCAR, like all sports, but the sanctioning body should be commended for a (mostly) smooth return to the racetrack. A year that looked potentially lost in April has now flipped to a point I’d be shocked if the Cup Series fails to finish its season.

That said, there’s still been some costly delays for the sport. A Gen-7 racecar expected to revolutionize competition on intermediates, among other places, won’t debut now until 2022. And how will NASCAR handle its schedule? Track agreements were scheduled to expire after the 2020 season in expectation of a complete overhaul. But how aggressive can the sport get with so much unknown about 2021?

A promising sign late this spring was an announcement Nashville Superspeedway would reopen for its first ever Cup Series race next season. However, an independent track, Dover Motorsports Inc., volunteered one of their dates on the Monster Mile to make it happen. I don’t think Speedway Motorsports, Inc. will be so forgiving to make room for places like Road America they don’t own. There’s also the issue of what happens to Pocono Raceway after a dud of a doubleheader? And will Chicagoland Speedway even reopen after no races there in 2020? Fans will be disappointed without the right changes, regardless of the extenuating circumstances at play.

The Dale Earnhardt Sr. Award (best on-track altercation): Chase Elliott vs Joey Logano at Bristol. It’s why they call this racetrack Thunder Valley. Will this move lead to playoff payback later on?

The Tony Stewart Award (best off-track altercation): Kyle Busch vs Alan Gustafson. No punches were thrown in this one. But Busch was put in the awkward situation of facing the wrath of his former crew chief at Hendrick Motorsports after making the boneheaded move of wrecking Chase Elliott down the straightaway at Darlington back in May.

The Darrell Waltrip Award (Tweet of the Year): NASCAR’s political stances put them in the national spotlight throughout the month of June. There was plenty of debate about #BlackLivesMatter but it’s hard to argue with the power of this moment, wherever you stand, after 39 drivers helped Bubba Wallace push his car to the front of the grid at Talladega.

(Best Race): GEICO 500 at Talladega Superspeedway. So much surrounded Talladega off the track regarding the Bubba Wallace hate crime-that-wasn’t, people will forget this rain-delayed Monday show. What a shame. A race Blaney won by .007 seconds produced 57 lead changes, three-abreast racing throughout and a phenomenal finish. Easily the best 500-mile event at that track since Dale Earnhardt Sr.’s 18th-to-first charge in the final laps back in fall 2000.

(Biggest Upset): Cole Custer at Kentucky Speedway. A rookie winning a race without an assist from Mother Nature? It’s near impossible these days. But Custer defied the odds, charging from sixth on the final restart at Kentucky Speedway to steal a playoff spot. In doing so, he changed the entire narrative about his rookie year in a matter of weeks and made a couple of people plenty rich with 250-1 odds in some places.

Honorable mention goes to Austin Dillon, who’s on our Frontstretch podcast this week after his win at Texas Motor Speedway. (Shameless plug!)

Driver On The Hot Seat: Clint Bowyer. Bowyer came out and said this week he’d love to return to Stewart-Haas Racing in 2021. I just don’t see how. SHR prospect Chase Briscoe is tearing it up in the NASCAR Xfinity Series and could wind up winning 10 races down there. How would you keep him at a lower level one more season without someone else signing him? Add in Harvick’s success plus Aric Almirola’s recent charge to eighth in points, and there’s only so much room at the inn.

5 POINTS TO PONDER: WHY IS NEW PAVEMENT ALWAYS A NASCAR NIGHTMARE?

You left out the faux pas of the year. That would be the Noose. If it had been originally reported as a garage door pull down, it would have been a nothing Burger.

What a sad and destructive event for NASCAR.

Great article and great selections, all; but, I think the Buckshot Jones (biggest disappointment) Award should go to Kyle Larson.

One correction: William Byron’s car and team is not actually Jeff Gordon’s (just the painted number is), that car is actually the 9 car. He has Kasey Kahn’s old team, and that 5 car has rarely done very well for years.

David Pearson as Hard Charger? That should be the Buddy Baker.