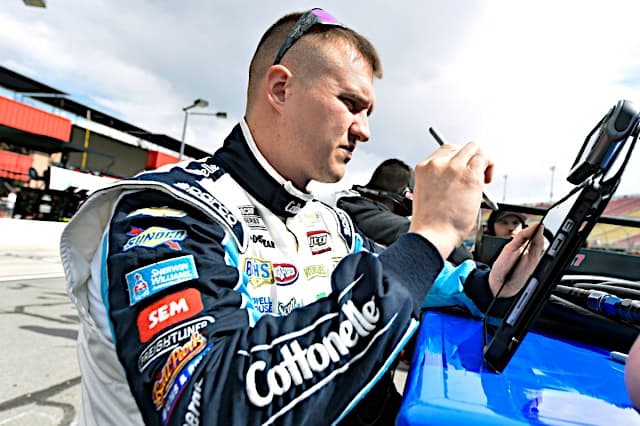 What’s going on with Ryan Preece this season?

Not many other drivers have had the kind of bad luck Ryan Preece has had this season.

The sophomore NASCAR Cup Series driver sits at a dismal 30th in points, following a low-light of three straight last-place finishes. This is after starting 2020 off with not being able to finish the first two races of the season.

Prior to the third race of the season at Auto Club Speedway, Preece had nine points. The No. 37 Chevrolet was then found to have illegal body modifications prior to the race that weekend, along with JTG Daugherty Racing’s other car, the No. 47 Chevrolet.

The 10-point penalty that followed meant that Preece totaled -1 point after two races, and a 30th that day in Fontana led to the driver having a grand total of six points after three races.

Preece has five top-20 finishes on the season, which puts him on track to come near his 2019 total of 11. The former Whelen Modified Tour Series champion, however, also had only six finishes outside of the top 30 all last season, compared to five at just the halfway point of 2020.

Preece is a very talented driver and brings some much-needed racing background diversity for the Cup Series. The Modified Series is the oldest series in all of NASCAR, yet is also the most neglected of the sanctioning body as the only open-wheel series sanctioned by the stock-car organization.

This has led to a very low turnout rate of Modified drivers moving up to the upper rings of NASCAR in the modern era, with drivers like Geoff Bodine being the exception instead of the rule. The only Modified Series champion to win a Cup race at some point in their career since 1965 has been Jimmy Spencer.

But now, almost entirely due to bad luck, Preece may just be on the hot seat for the rest of this season. Unlike the next topic’s driver, Preece hasn’t been awful as a driver at all, but being well below a teammate in points and being over a full race behind a much smaller team like Go FAS Racing is going to lead to a few questions from the sponsor, no matter what team or driver we’re talking about.

And with an unstable COVID-19 economy heading into the off-season, who even knows what the situation will be for JTG and major team sponsor Kroger going forward.

There’s been a lot said about Quin Houff over the last couple of days, but I want to touch on one big thing that a lot of other people in the NASCAR media have not been not picking up on: Houff’s experience.

I’ve read a lot of things this week basically stating that Houff is wet-behind-the-ears and is brand new to Cup racing. The reality is that, while he does have very little overall NASCAR national touring series experience, that is not the case in Cup.

This week’s race at Kansas Speedway will be Houff’s 36th NASCAR Cup Series start. He’s a rookie, yes, but he also has more experience than the average rookie at the Cup level. After what amounts to a full season in Cup, the vast majority of drivers would at least know that they can’t pit from the top lane in turn three.

It’s obvious that Houff did not have the experience to move up and race at the Cup level. The Cup Series is supposed to be the 40 best stock-car drivers in the country. In reality, that has never really been the case and probably never truly will be, but it should be something that NASCAR aspires for the series to be.

Nobody should enter the Cup Series expecting to learn the fundamentals of what is expected of them from drivers in that series. This is evident by Houff still making mistakes you’d expect from a rookie in his fifth start when he’s actually starting his 35th.

A demotion system is silly and just wouldn’t work in the capitalistic “paradise” known as Cup racing. Instead, what should be happening is a much more strict gateway to getting into the Cup Series.

Fifty combined starts in NASCAR’s Xfinity and Gander RV & Outdoors Truck Series – with at least 15 of those starts at the NXS level – should be the bare minimum before a driver gets approved to run in the NASCAR Cup Series. With exceptions being granted only to veteran Truck drivers (like Matt Crafton) and to champions or veterans of Cup caliber racing series, such as IndyCar and Formula 1.

Right now, the current system really doesn’t work. Houff shouldn’t be able to choose whether he wants to do NXS or Cup. Even if he were a wunderkind, he’s not going to have the respect of somebody who has worked their way up through the ranks among his peers who did so.

"In this situation you have to be more aware. You have to know there's a car inside of you." – @SpotterBrett and the DBC gang discuss rookie Quin Houff's major mistake that triggered a violent wreck on Sunday.

Doubly so if it’s a driver like Houff, who has made mistake after mistake after mistake this season since replacing Landon Cassill. Houff’s average finish is 32nd, compared to Cassill’s 29th in 2019, with Cassill also recording significantly fewer crashes. Tearing up racecars is a big no-no for a team as small as StarCom, and Houff has brought them four DNFs due to crash damage alone this season.

Is Gragson going to grow up?

Noah Gragson has turned into a bit of a wrecking ball this year.

In this past week’s NXS race at Texas Motor Speedway, Gragson started out the day by running into Riley Herbst heading into turn four. On lap five. Of a 200-lap race.

The 1️⃣8️⃣ goes around!

This led NBC to put up a graphic nothing that Gragson has been involved in 12 on-track incidents in 16 races. Now, granted, that doesn’t mean all of those were instances where Gragson was at fault. But the Las Vegas native has had two in particular that were either really dumb or crossed the line.

At Bristol Motor Speedway last month, Gragson dive-bombed and wrecked his teammate, Justin Allgaier. Now, it’s bad enough to dump a teammate. It’s worse when it’s a Dash 4 Cash event. Instead of JR Motorsports having two cars in D4C the next week, Gragson was the lone driver instead of himself and Allgaier. Not only that, but it wasn’t even the last lap of the racing, meaning that Gragson had to survive a NASCAR Overtime restart to win.

The other happened at Kentucky Motor Speedway a few weeks ago. There, Gragson put himself and Harrison Burton into the wall on a late-race restart. The incident led to a highly-publicized fight following the race.

Another angle of the fight between Harrison Burton and Noah Gragson. (Via @NASCAR_Xfinity) pic.twitter.com/dMQiHQAuSC

The tale of the tape for Gragson is very simple. He has talent, evidenced by him winning the Dash 4 Cash last month despite his crashes. But he also doesn’t have driver IQ, nor does he have the maturity of somebody who could eventually be a Cup driver, considering all the responsibilities that comes with the position.

I think Allgaier is well-respected & has Cup experience so he is natural pick in this situation. As far as future of 48, I have not heard his name mentioned & wouldn't consider him high on list. Jones, Reddick, Wallace likely candidates. JHN, Briscoe making case for themselves. https://t.co/JnPge6XOx1

There’s a reason why Rick Hendrick is apparently uninterested in promoting Gragson up to the Cup series, with Ford driver Chase Briscoe being named for consideration before the JRM driver. That tweet may be a smokescreen, but how likely is it that Hendrick is seriously considering hiring somebody with this rap-sheet? It isn’t too late for the young driver to turn the conversation, but he needs to do a lot of growing up very quickly in these next couple of months.

Can Kyle Busch win at Kansas?

Kansas is most definitely a NASCAR race track.

The series is in a pretty big dry spell when it comes to different racetracks on the schedule. “Okay, so this week they’re going to yet another 1.5 mile oval. HOW FUN.”

Every 1.5 mile track has some stigma attached to it. Atlanta Motor Speedway has the aged surface, Kentucky Motor Speedway is slightly flatter in one set of turns, Texas Motor Speedway has terrible races where nobody can complete green-flag passes. Kansas is probably the most generic of these tracks, with it being fairly flat but with some progressive banking in the turns.

That means Kyle Busch may finally be back. The defending Cup champion has struggled to find any kind of groove this season. Then, this past weekend at Texas, Busch won the NXS race before being disqualified, won the Truck race, and would have won the Cup race if fresh tires actually meant anything with this aero package.

Busch used to struggle at Kansas, but he finally seems to have gotten into a rhythm there in recent seasons, having finished out of the top 10 only once since the start of 2014. Busch enters this midweek race with a lot of momentum and may well be a force to be reckoned with on Thursday night.