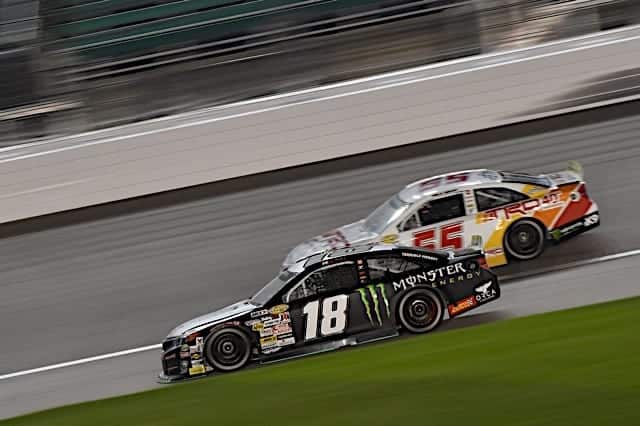 In addition to being the eighth race of the ARCA Menards Series season, the 2020 Dawn 150 at Kansas Speedway will be an important test for the championship contenders because the 1.5-mile track will also host the season finale. This race and its name are realigned from the since-canceled event at Chicagoland Speedway.

So, which drivers will be ones to watch on Friday (July 24) night?

Michael Self has been the championship leader since he won the season opener at Daytona International Speedway. Last year, he finished second in the season finale at Kansas to teammate Christian Eckes. As a result, Self was the runner-up for the championship. In four career starts at Kansas, he has one win and four top fives.

Self is the only driver in this field with a victory at Kansas Speedway.

“Kansas Speedway is definitely one of my favorite tracks on the ARCA schedule,” Self said in a team release. “I’ve got more experience there than any other intermediate track, so I’m hoping we can go in and use that and the notes we have from good runs there in the past to try and rebound from Iowa (Speedway).”

Sitting 19 points behind Self in second place in the championship standings is Bret Holmes. Driving his family-team No. 23 Chevrolet, Holmes looks to be on the brink of capturing his first ARCA victory. In three starts at Kansas, he has one top five and two top-10 finishes, albeit without leading any laps.

“This is finally our weekend, in my opinion,” Holmes said during a Zoom call with media members on Wednesday (July 22). “I feel we’re better than a top-three car at Kansas. We’re running too well for me not to be saying, ‘It’ll be soon.'”

At the beginning of this season, Holmes intended on running only part-time with the focus turned to chasing wins. He wouldn’t give a percentage for his odds of running the rest of the season but acknowledged strong efforts may factor into the decision.

“If we keep having good runs, it’s hard not to run for the championship,” Holmes said.

As for his success thus far this season?

“The same guys on my team returned from last year,” he said. “They’re definitely well worth it.”

Holmes is the outlier of full-time drivers who don’t have major sponsorship backing or manufacturer support. Surprisingly, he has not had conversations with Chevrolet executives about receiving support.

“I wish I had that option,” he admitted. “I don’t know what it is, but sponsorship and (manufacturer support) are hard to come by. I don’t know if it is political connections or what, but we’re certainly running well as it is with only five full-time guys.”

Deegan started 12th and finished eighth in her first career start at a 1.5-mile track.

“I think we have a good piece to work with based on how we baselined at Kentucky, our first intermediate track we raced this year with DGR-Crosley,” the 19-year-old Deegan said in a team release. “We should have a good set-up. We are kind of perfecting that set-up right now to bring it to Kansas. Hopefully we have a good run and win soon.”

Ty Gibbs has won three times this season, but due to his age, he is ineligible to compete in this race. Riley Herbst will drive the No. 18 Joe Gibbs Racing Toyota. Herbst will use this race in preparation for his NASCAR Xfinity Series race, also at Kansas, the following day. In three ARCA starts there, he has one top five (fourth in 2018) and two top 10s. Can he make it three straight ARCA wins this season for the team?

Although he is 18 years old and thus eligible to compete, Chandler Smith will not drive the No. 20 Venturini Motorsports Toyota and Ryan Repko will get behind the wheel instead. Repko will be making his first career start in any series at Kansas in this race and is only scheduled to compete at Michigan International Speedway moving forward. With the immensely talented TRD pipeline, he knows there are expectations to perform well.

“I have to capitalize at every opportunity,” Repko said during a Zoom call. “We found some traction over the last two races, so we’ll bring that to Kansas. The expectation isn’t strictly to win but perform well because of that talented TRD program. We’ve had some strong finishes.”

The 20-year-old Repko only signed a year-to-year deal with TRD, but he would like to return next year. He has been told those discussions will take place in August.

Of the five races at Kansas this upcoming weekend, Tanner Gray will compete three times: twice in his NASCAR Gander RV & Outdoors Truck Series entry and once driving the No. 17 DGR-Crosley Ford in this race. He will have a new sponsor on his car.

In his most recent start at Kentucky Speedway, Derek Griffith finished a career-best seventh driving the No. 22 Chad Bryant Racing Ford. Kody Swanson, in his ARCA debut, then finished eighth at Iowa Speedway. The team is seeking its first top-five finish this year after winning three times last year with Ty Majeski.

Ryan Huff did not compete in the most recent ARCA race at Iowa but is sixth in the point standings. He will also make his Truck Series debut this race weekend.

Huff has two top 10s, with a career-best eighth place at Kentucky, thus far this ARCA season. He is one of four entries fielded by Andy Hillenburg, joining Heim, Hill, and Mike Basham.

Only twice in the 19 ARCA races at Kansas has the winner come from outside the top 10, and this weekend will most likely follow the trend. The starting lineup will be set via the owners’ points as there will be no qualifying. However, there will be a 45-minute group practice session.