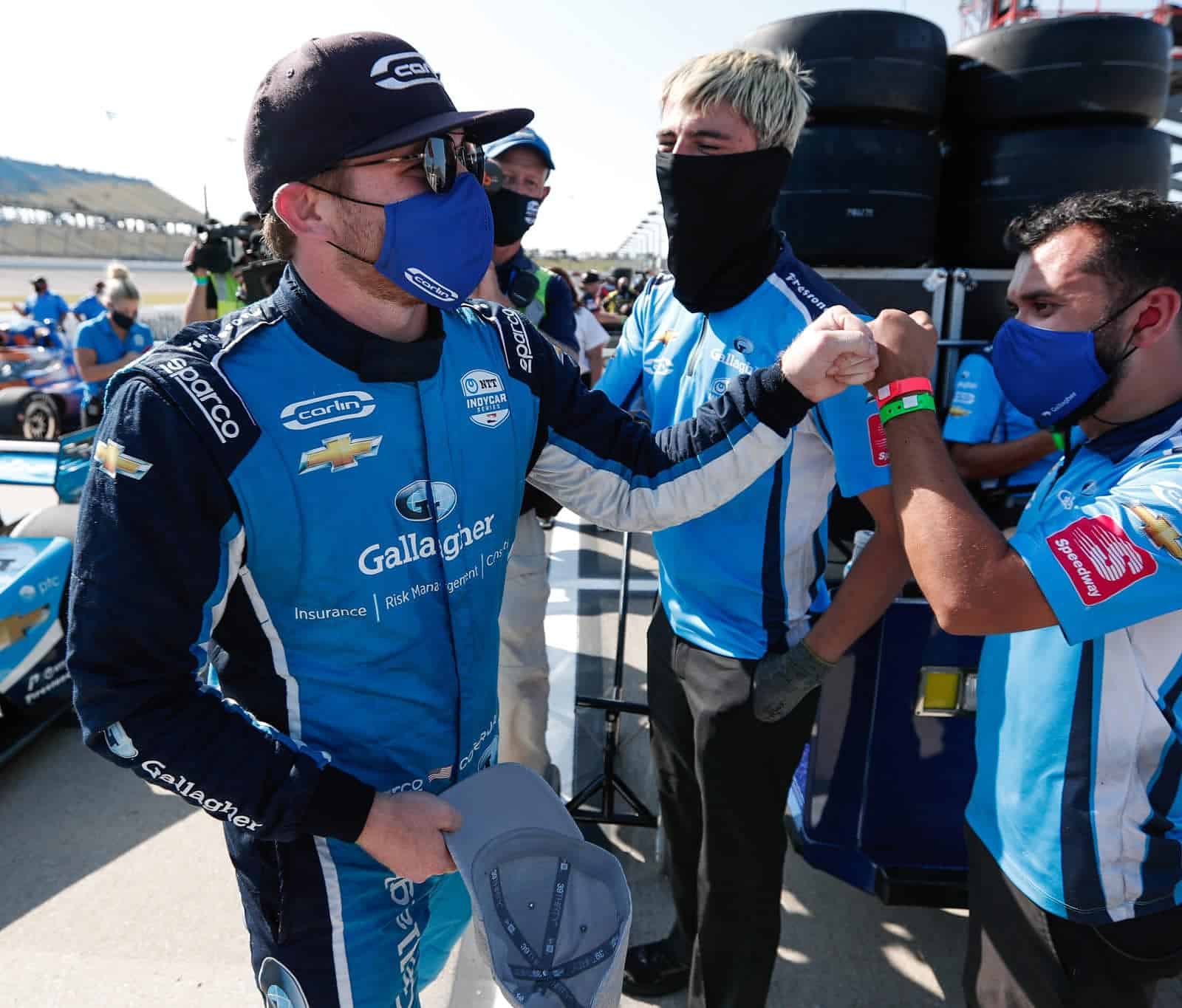 Carlin has a storied history throughout all levels of motorsport, and it seems like it just took signing Conor Daly for the IndyCar team to start finding its footing.

Ever since it entered its first series in 1997, Carlin has been associated with victory. The team has been a go-to for successful Formula 1 drivers like Sebastian Vettel, Daniel Ricciardo and Lando Norris. It served as a jumping-off point for IndyCar drivers Will Power, Max Chilton, Josef Newgarden, Robert Wickens, Takuma Sato and Charlie Kimball.

But when Carlin started in the NTT IndyCar Series full-time in 2018, it seemed to hit a wall. Kimball had the best results in the last two seasons, and he finished 17th in the IndyCar championship.

In 2020, though, Conor Daly is changing the team’s fortunes, as well as his own.

With Chilton stepping back from ovals, Daly has slotted into those events for the 2020 IndyCar season. But he wasn’t starting from scratch: he had raced for the organization twice before, for four IndyCar events in 2019 and in 2011 in the GP3 series.

That familiarity has benefited both parties. In a press conference ahead of the 2020 GMR Grand Prix, Daly explained, “I knew that environment already. We were able to take advantage of that. We had a fantastic car. They did the job over the off-season, kind of working with what I had told them last year that we needed to do.”

He’s secured sixth, eighth and 11th places in the three oval events he’s contested so far. And then there’s his well-earned pole position for the first of the 2020 Iowa IndyCar 250s, which was the first NTT P1 Award in Carlin’s history and the first of Conor Daly’s career. The new driver and his team look like a pretty perfect match.

FIRST POLE POSITION!!!! Unbelievable!!! So happy for this team @CarlinRacing @GallagherGlobal ! Amazing work over the off season to give me some fast race cars this year lets go get it tonight!! #Iowa250s pic.twitter.com/l6HYpJsh5l

That might be because they’re both in the same boat this season. Carlin’s move into IndyCar hasn’t been easy, and the 2020 IndyCar season has the added stress of a global pandemic. If teams aren’t able to get their footing within the first few years in motorsport, it’s tough to justify spending the money to stick it out on the grid. Carlin needs to improve.

Conor Daly has been a sporadic presence in IndyCar for the past seven years—only two of which have been full-time campaigns. Every other year, he’s been forced to pick up whatever scraps have been tossed his way, trying to make an impression in equipment he may not get a chance to grow accustomed to. For the first time since 2017, Daly is contesting every race of a season, albeit split between two teams. If he wants to secure a spot on the grid beyond this year, Daly has to prove that he’s a racer worth taking a chance on.

The Daly-Carlin relationship is one founded on a mutual urgency. Both parties need success this season. They can’t afford anything less.

Daly and Carlin have been proving doubters wrong out of sheer necessity, and having a single-car team—normally a potential detriment in terms of resources—has so far worked to their advantage.

“I think having information and more data, especially when the day is so condensed, that’s super important. And it is a shame to be missing a wingman, per se,” Daly reflected in a June press conference. “But the team is prepared for that. We’re all ready to give it our best effort no matter what. It’s an unprecedented situation, for sure. Everyone says that so often. But racing is a business. We got to do the best job that we can no matter what.

“Oddly enough I’ve been in a lot of crazy and strange situations in my career so far,” he added. “I really enjoy situations where there’s not a lot of information known about certain conditions.”

That ability to thrive under pressure and ambiguity has enabled Daly to make a career out of moonlighting for every team that will give him a shot. But now that he’s been able to settle down, his determination and attention to detail are being channeled into consistent performances.

Consistent performances are just what Carlin needs, and with Conor Daly at the helm, the team is looking stronger than ever before.