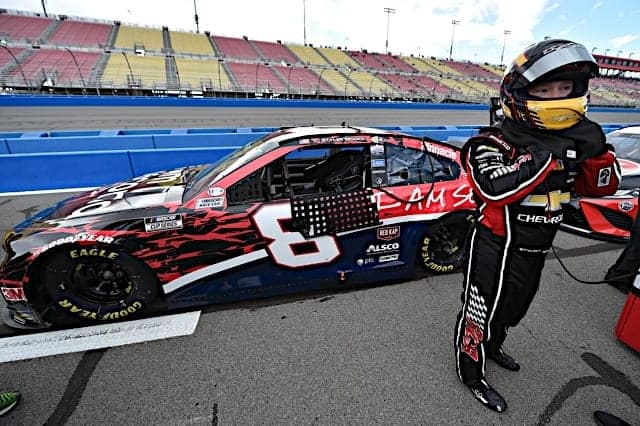 Thursday, Thursday, Thursday! It’s time for some midweek racing for your NASCAR DraftKings rosters as the NASCAR Cup Series makes the trek to Kansas Speedway. The Super Start Batteries 400 airs on Thursday, July 23 at 7:30 p.m. ET on NBC Sports Network.

It will be the third consecutive race at a 1.5-mile track, though all three have slightly different shapes. Don’t fall into a trap of selecting someone just because they were good the past two weeks.

Why? Kansas was repaved in 2012, so there should be more tire falloff than there was last week at Texas Motor Speedway. Also, Goodyear will have two different tire setups; the left sides were used in October 2019, while the right side tires were used at Texas and Kentucky Speedway. The racing should be better, creating more shuffling for position and potential new faces at the front of the field.

There’s one important detail to note going forward for Daily Fantasy: NASCAR announced Tuesday that there wouldn’t be any practices or qualifying in the Cup, Xfinity and Truck series for the rest of the season. Also, the starting lineup will continue to be a random draw, but will change when the playoffs begin.

How do those permanent changes affect Daily Fantasy? Well, it means you will have to rely on track history and recent results to formulate your DraftKings roster, rather than practice speeds. There may be more similar lineups in contention as users flock to the same drivers, but that might not be a bad thing. You don’t want to miss out on those big points if a highly-owned historical favorite performs well.

Before I move onto this week’s picks, here are the results from Texas.

Austin Dillon surprised everyone and won the race at Texas. Kevin Harvick, Erik Jones and Aric Almirola also had good results and produced high DraftKings scores. Unfortunately, John Hunter Nemechek finished outside the top 20, which kept this lineup from a much higher cash-in.

Elliott could use a rebound this week after slotting outside the top 10 in two straight races. Fortunately, Kansas is a track where he’s excelled. The No. 9 Hendrick Motorsports driver led 44 laps en route to victory in October 2018. Additionally, he led 45 laps before crossing the line in fourth last spring and was runner-up last fall.

Before his 23rd place at Kentucky two weeks ago, Elliott had three top fives and four top 10s at the 1.5-mile tracks. One of those was a weeknight victory at Charlotte after leading 28 circuits. From the Coca-Cola 600 to the Dixie Vodka 400, Elliott led 119 total laps in those four 1.5-milers. He should be a favorite to hold the top spot Thursday and possibly earn his second victory.

Note: Before I began this article, the DraftKings prices were not yet known. As a result, this sample lineup cannot be made. However, if you take out Elliott, you can fit in Matt DiBenedetto. He’s had some strong results this year as well.

Last Sunday at Texas, Truex was caught up in a melee on a restart with about 100 laps to go and had to settle for 29th. Still, he has two top fives and four top 10s at 1.5-mile tracks this season, including a runner-up at Kentucky. He led 57 laps and recorded 27 fastest laps in that race, which increased his DraftKings score to 76.75.

Not only has Truex performed well this season, but he has historically had good results at Kansas. The No. 19 Joe Gibbs Racing pilot earned four top fives and six top 10s in the past 10 races there. He also brought out the broom in 2017, winning both the spring and fall events. That year, he led 195 total laps in putting together two impressive victories. Though Truex ended up 19th in the spring 2019 race, he rebounded to sixth in October after leading 33 laps.

Look for Truex to bounce back from last week’s wreck and earn a good finish.

In three of the past four races at Kansas, Blaney has finished 21st or worse. So, why did I pick him? Well, he still managed to work his way to the front to lead 54 laps in the spring 2018 event. Unfortunately, he crashed out with about 20 laps to go and ended the night 37th. Blaney also led 83 laps the year prior before coming home in fourth.

However, the real reason Blaney’s here is because of a spectacular 2020 season at tracks of the same length. The No. 12 Team Penske wheelman has earned four top fives and six top 10s at these courses and held serve over the field for a race-high 150 circuits at Texas. His strong performance last Sunday produced 112.5 DraftKings points, placing him in the perfect lineup. Blaney also led 70 laps at Homestead before ending in third.

The Team Penske driver should continue his top-10 trend Thursday night. Don’t leave him off your roster.

Reddick had a monstrous debut last spring for Richard Childress Racing, gaining 12 positions to end in ninth with a part-time, No. 31 Chevrolet. In Xfinity, he was runner-up in 2017 and 2019, and he took home fifth at Kansas in 2018. But has Reddick had good performances this season to back up this history?

Yes, indeed he has. In fact, just last week Reddick battled RCR teammate Austin Dillon for the lead after taking only fuel on a late pit stop. Though he ultimately came home second, Reddick still scored 69.3 DraftKings points for those who rostered him. Additionally, the rookie put together two solid performances at 1.5-mile tracks recently: 10th at Kentucky and fourth at Homestead. He should again contend for a strong finish Thursday night.

Who would’ve thought that Dillon would win the O’Reilly Auto Parts 500 after taking two tires on a late-race pit stop? Certainly not me. That victory boosted his DraftKings score to 75 points, which is extremely good value for the price. Dillon’s made some marked improvements this year, as he has yet to finish outside 14th at 1.5-mile tracks so far. Hopefully, Childress’ grandson can keep up the momentum and earn another top 10 at Kansas, a track where he has eight consecutive top-20 results.

Last Sunday, I should not have gotten off the McDowell train. He scored yet another top-15 finish and totaled 49 DraftKings points. Back in June, McDowell recorded another 15th at Homestead, which resulted in 46 DraftKings points. He has consistently provided good value in Daily Fantasy this year, in particular at a place you wouldn’t expect for his underdog Front Row Motorsports team: 1.5-mile ovals.

Besides all that, The No. 34 Ford pilot made up 22 spots on the track to end up 13th in the 2017 spring Kansas event. He’s proved that he can take care of equipment, avoid trouble and strategize his way into the front half of the field. Don’t be afraid to place him in your lineup.