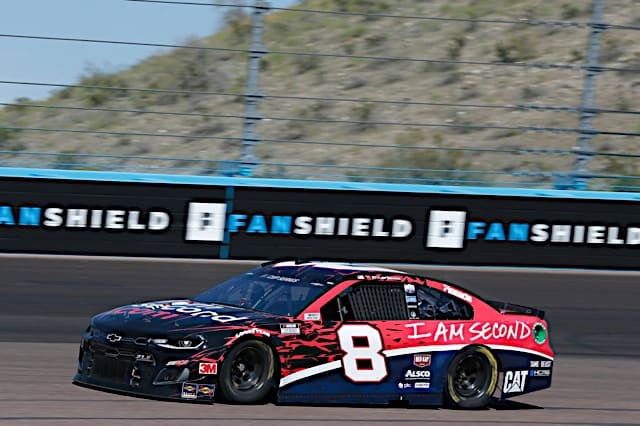 Dorothy, we are finally in Kansas. NASCAR makes its return to Kansas Speedway after the original May date was postponed in the COVID-19 realignment.

Kansas will host the 19th race of the NASCAR Cup Series season. As the chase for the Playoffs heats up, the NASCAR Cup drivers will have to tackle 400 miles on the 1.5 mile track. Bubble drivers like William Byron, Jimmie Johnson and Tyler Reddick will look to get themselves into a better playoff position.

Kansas Speedway has been on the schedule since 2001. The track was repaved in 2012 which made it blistering fast for the first five years. Now, speeds have closed back to where they were before the repave. Much like other races this season, Kansas has an extra element of complexity: the race is being run outside of its traditional hosting time. Kansas has had race dates in the spring and the fall but not in the summer.

Of the last 10 races at Kansas, the driver who has led the most laps has won the race twice. The 2020 NASCAR Cup season has seen eight winners leading the most laps. Do not be surprised if the winner this week does not lead the most laps.

Here are a few drivers to keep an eye on for Thursday night’s race.

No driver is hotter on the race track right now than Harvick. In his last five races, he has two wins and five top fives. Harvick has also lead at least one lap in his last six races. Players should ride the hot hand of Harvick into Kansas, as he has the best average finishing position among active drivers with at least two starts. Harvick is also tied with Jimmie Johnson with active drivers who have the most wins at Kansas (three). There is no reason why players should not have Harvick in their lineup as he will have the best view of the green flag.

Even though Harvick has had the best car at Stewart-Haas Racing this season, the organization as a whole has improved in the past few weeks. Aric Almirola has improved, and perhaps more importantly, gotten more consistent. Almirola has finished in the top 10 in the last seven races – more than Harvick has. Almirola has had some good runs earlier in his career with Richard Petty Motorsports. More recently, Alirmola has finished in the top 12 in three of the last four races. Almirola is starting third and would be a strong favorite for a top-10 finish on Thursday night.

That Jones Boy is facing the pressure of a contract year, and he’s coming to a track where he made his debut in 2015 while subbing for the injured Kyle Busch. Jones’ debut did not go well, crashing out of the top five and finishing 40th. In the last four races with Joe Gibbs Racing at Kansas however, Jones has a worst finish of seventh. Jones is a pick that is a high-risk, high-award candidate. Since the return to racing, Jones has six top 10s and six finishes outside of the top 20. Bad luck has hurt Jones in the standings, and he’ll roll 21st off the grid. Hopefully, Jones can keep up with the Joneses – his Joe Gibbs Racing teammates.

Richard Childress Racing has been making strides in their program this year, highlighted by a one-two finish which has not been done since Clint Bowyer and Jeff Burton in 2011. Tyler Reddick has been in the top 10 for the last three races. Even though he has a small sample size of one start in the Cup Series, he has some success in the Xfinity Series with three top fives in three starts. Reddick could quietly get another top 10 this week or surprise people with a chance to win. It also helps that Reddick is starting 23rd and is poised to gain positions. Reddick is undervalued for considering the team’s momentum and his record at Kansas Speedway.

Buescher may not be on a lot of people’s radar when it comes to their picks. For being our cheapest option, this pick might have a chance to secure some solid points while competing for a top 10. While Buescher was competing with different equipment, he has two top 10s at Kansas Speedway in his eight starts. Buescher has scored top 10s at a better rate at Kansas Speedway compared to his career (16 of 168). Buescher would be more of a low-risk pick as he has been running at the finish of 90% of his starts. He could be a sleeper and quietly score some points as he will start in the 13th position.