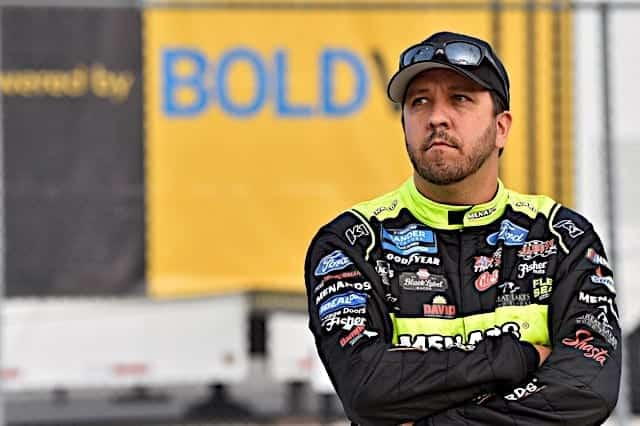 This weekend, the Gander RV & Outdoors Truck Series hits Kansas Speedway for  the series’ doubleheader debut. It’s also the first time the Truck Series will run more than one race at the mile-and-a-half oval in a single season.

Eight races into the season, only Grant Enfinger and Sheldon Creed find themselves locked into the playoffs based on winning, and since there are only eight regular-season races remaining, every winner this season will make the playoffs. But that also means that there are still plenty of opportunities for drivers to point their way into the playoffs, too.

Given that sixth through 13th are separated by just 51 points, this weekend’s doubleheader at Kansas has the potential to really shake up the standings in a big way. After all, a perfect race of winning both stages and the race itself would be worth 60 points, which could make a major difference in just a couple of days.

With that said, there are several drivers that would benefit from a solid pair of races at Kansas this weekend.

Matt Crafton has put together back-to-back third-place finishes and moved from 14th to 10th in the standings since a first-lap DNF at Pocono Raceway. But the two-time champion, who is above the playoff cut line for the first time this season, still sits in a precarious position just 11 points ahead of rookie Derek Kraus.

The good news for the No. 88 team is that Crafton’s history at Kansas is pretty solid. In fact, in his last seven starts at the track, he’s finished outside the top 10 just once (16th in 2017). That record also includes a pair of victories. Of course, Crafton has also been locked out of victory lane since Eldora in 2017, so you know he wants to grab a win sooner rather than later. And if he can stay out of trouble, he can easily finish inside the top 10 in both events and put himself in a better spot in the standings.

Meanwhile, a couple of other surprises currently below the cut line are Johnny Sauter and Stewart Friesen, both of whom were in the pre-season conversation as those that would make the playoffs.

For Sauter, it’s more a matter of how bad his bad races were so far this season. With five top 10s and a 13th in eight races, the part that really hurts is the 40th-place finish at Atlanta Motor Speedway when he was disqualified and the motor failure at Texas that resulted in a 33rd-place finish. The motor at Texas, coupled with Crafton’s third-place run, is what dropped Sauter two positions last weekend, and it’s also a perfect example of just how quickly things can change in an instant each week.

Friesen, on the other hand, has just been “off” this season. With only four top 10s and an average finish of 13.9 this season, it’s clear the manufacturer change to Toyota during the offseason is causing some growing pains. The good news, though, is that Texas turned into his best finish (fourth) this season and should prove to be some positive momentum for the No. 52 team.

On the other side of the cut line, Todd Gilliland – who’s currently ninth and has a slim 20-point margin over Kraus in 11th – has fallen from fifth to ninth in the span of just two races. And while a 10th and a 27th don’t sound like the worst situation, playoff points have been key to his drop.

According to Motorsports Beat’s latest post-race totals, Gilliland has scored just 44 stage points so far this season and is the lowest of the playoff drivers in that list in 10th overall for the season totals. It’s something the No. 38 team needs to consider in the coming weeks as the series edges ever closer to the playoffs.

In reality, the likelihood of eight different winners to close out the remainder of the regular season isn’t very high, so it makes every single point that much more important every week. And a pair of races at Kansas this weekend is a great way to make a large difference in a short timeframe.

“Graduation is very exciting. I wish I could be at my graduation ceremony, but I’m living my dream as a racecar driver. I can’t thank everybody enough for all they have done for me through high school – particularly, all of my teachers and my Principal Mrs. Laborde.”

Ruch brought sponsor representatives into the infield after the race for a photo op and NASCAR responded.

The infield is screened and contained and this was a violation of that process. pic.twitter.com/6vxQr0Af2F