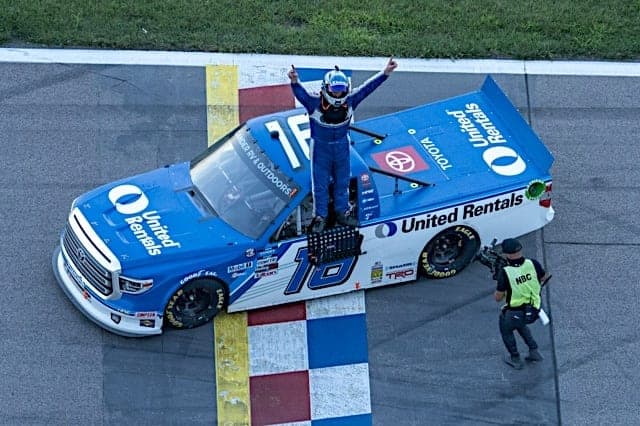 After passing Brett Moffitt on lap 90, the 26-year-old cruised away to win the spoils of the Blu-Emu Maximum Pain Relief 200.

Along with Moffitt, the duo quickly established itself as the two superior trucks throughout the event. However, when Hill made his final pass, it was lights out for the rest of the field.

While Hill cruised away, Moffitt lost substantial time and a final shot at the win after fighting a long, fierce battle with Grant Enfinger for second place.

“We’ve been working so hard this season,” Hill told Fox Sports 1. “We’ve been running so consistent. Last week was a bummer having engine troubles, and I told the guys that we finished fourth here last year and I was going to finish three spots better, and I’ll be danged, we did it. I can’t thank everybody enough.”

It was a long-awaited victory for Hill, who had lost out on wins on several occasions this season thanks to mechanical gremlins, wrecks and bad luck. It was sweet redemption for Hill, who not only scored his first win in 2020 but also his first for his longtime backer United Rentals.

“It’s the first win for the United Rentals paint scheme,” Hill added. “That is awesome. They’ve been a tremendous partner for me throughout my racing career, so I’ve been wanting to get a win with these colors on and so glad I was able to do it.”

After several weeks of carnage and mother nature’s crippling grip, the truckers put on a less chaotic event than the ones in recent memory. However, the quick pace was briefly slowed early after a long spin and slide by Robby Lyons, which also saw Jordan Anderson and Bryan Dauzat make contact in a completely separate incident.

An issue for Korbin Forrister in the final stage was the only other caution for contact during the event.

The Lyons incident proved to be the only on-track issue during the first stage, which saw Moffitt leading for the majority of the segment. In the second stage, Hill proved to be the dominant driver but had to hold off a hard-charging Christian Eckes for the stage win.

Like the wrecks, issues were down throughout the field but still prevalent. Among the casualties were Ross Chastain and Stewart Friesen, who each lost multiple laps with tire problems. Playoff contender Tyler Ankrum encountered similar problems, but they proved to be more serious. The GMS Racing campaigner lost a brake line on lap 15 after cutting down a tire and was forced to spend an extended period of time in the garage replacing it. Ankrum later returned to the racetrack but was a multitude of laps down.

Brake issues for playoff hopeful Tyler Ankrum. He's behind the wall early on.

He entered today up 34 points on 11th-place Derek Kraus in the standings. #NASCAR

Behind Hill and Moffitt, Enfinger was able to hang on for third place ahead of fellow postseason hopefuls Matt Crafton and Derek Kraus. Zane Smith and Ben Rhodes found their ways to the front during the event, but were relegated to the sixth and seventh spots, respectively.

Thanks to a tiered draw to determine Saturday’s starting lineup, Chase Purdy will start from the pole for the second event. Purdy finished 15th in the first event of the weekend.