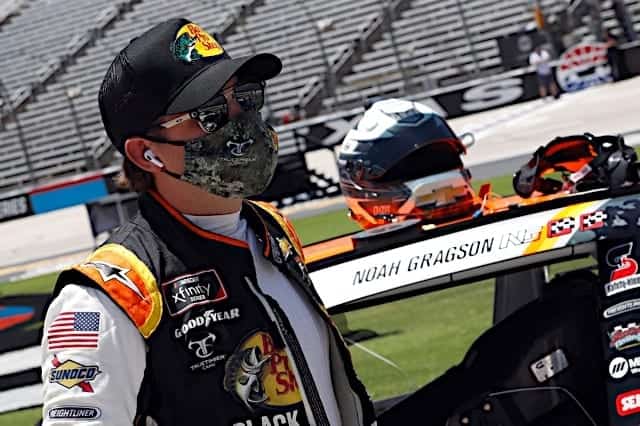 Should NASCAR implement more stringent standards for drivers to participate in the NASCAR Cup Series?

Alex Gallacher: Yes. Some of the Cup drivers do not deserve to be there. What makes William Byron, Tyler Reddick and Chase Elliott different is that they all won championships at the lower levels before coming to Cup. The broadcast team said it best: prior to his 2019 Cup debut, Quin Houff had 12 Xfinity Series starts and a handful of K&N Pro Series/ARCA Menards Series starts. No top 10s, no top fives and no wins in Xfinity, two eighth-place finishes in ARCA. How does that make you qualified to be a Cup driver? Cup is the highest level of American stock car racing, and it’s meant for the best drivers in the world, not some kid with a bunch of money. While yes, NASCAR has devolved into who has the biggest wallet, guys like Houff are a danger to themselves and others. Houff should do the smart thing and send himself back to Gander RV & Outdoors Trucks or Xfinity, iron out his kinks and then come back. In order to run at the Cup level, a driver should have at least one full season in Trucks and Xfinity, a championship or three to five wins/15 top fives/20 top 10s in each series. Or for the lower-budget teams, if their driver hasn’t won anything, they should be required to make starts in a minimum of two or more full seasons in Trucks and Xfinity and have at least one top 15 or top 20 before coming to Cup. This way we can tell that drivers coming up are the real deal and not a moving chicane.

Zach Gillispie: Yes, and poor Houff, the guy cannot catch a break. But it’s not his fault, it’s NASCAR’s. He got a full-time ride with practically zero NASCAR experience in any form. Good for him, but NASCAR needs to realize that its once-stringent driver policies are all but gone, and a lot of that has to do with financial reasons. Houff’s inexperience has been seen in big ways this season, and in some instances, it has been dangerous. However, I disagree with Brad Keselowski‘s call-up/demotion method. That could make drivers look over their shoulders so much more, which will incite more mistakes and uncalled-for incidents. Xfinity driver Josh Williams said earlier this week that when he came into the sport as an 18-year-old, it was so hard to get NASCAR to license him on various tracks in any series, no matter what his talent was. However, today drivers don’t have to scratch and claw as Williams did, which makes his effort seem void. NASCAR needs to return to stricter policies and make drivers work prove they belong over the course of time and age progression.

Adam Cheek: Yes. I’m not on board the minimum age train as much as I am prior requirements, but some standards should be put in place. Houff is a rookie, and rookies are bound to make mistakes, but Sunday’s blunder was a costly one on multiple levels. Matt DiBenedetto and Christopher Bell‘s days were ruined, the caution prevented arguably the day’s two best cars (Denny Hamlin and Ryan Blaney) from having a shot at winning and Houff’s small team was left with a totaled No. 00. Houff had 16 starts in NASCAR-associated series before he was brought to Cup – one K&N appearance, five ARCA races and 10 Xfinity starts. No full seasons, no Truck experience, no real rising-through-the-ranks trajectory. He’s not the only driver to make a bad mistake by any means, but he’s been involved in quite a few incidents in 2020, and it’s time NASCAR takes a hard look at restrictions on drivers. NASCAR could require drivers to have at least 10 starts each in both Xfinity and Trucks, or run a full season in either series, before they’re allowed to even race in Cup. Once there, inexperienced drivers should be limited to part-time starts before being able to run full-time.

Whose Cup playoff outlook has taken the biggest hit over the past two weeks?

Gillispie: It’s surprising to even put him in this conversation, but Kyle Busch is teetering in a place he has never been before: the playoff cutline. While Busch is a comfortable 95 points ahead of 17th-place Byron, he’s not out of the woods yet. In fact, he’s trending in the opposite direction. If Cup gets more surprising winners in the coming weeks like it recently has with Cole Custer and Austin Dillon, Busch will be right on the cutline, even if he consistently notches top 10s. Even if we don’t get a surprise winner, if he records two DNFs between now and the playoffs, he will be on that ever-precarious line. Could you imagine if Busch misses the playoffs? Who saw that coming? But he only needs to do one thing to put all that to rest: win.

Mike Neff: Ryan Preece‘s, if he actually had one. Aside from Preece’s three consecutive last-place finishes, it would seem as though Jimmie Johnson has taken the biggest hit. His season has already been a struggle, but lately he’s had good cars and pissed away potential good runs, or even wins, with myriad mistakes. If Cliff Daniels and the team don’t get the car under him and Johnson doesn’t run like he is capable for a few of the races coming up, his final season could be a battle for 17th in points.

Gallacher: Easy: Erik Jones. For some reason, Jones didn’t hit the ground running in the Cup Series. The kid from Michigan looked to be the next star in Cup, but after three seasons, it’s clear he is just average at best. Byron is possibly fighting for his ride as well, but his prospects are looking decent as long as he at least keeps the car out of the wall. Jones has had the worst luck in 2020; he has finished in the bottom half of the field nine times this season and has a best finish of third. Jones isn’t a bad driver at all, but a change of scenery for 2021 would serve him better, a la Joey Logano moving from Joe Gibbs Racing to Team Penske. Jones’s playoff chances are going to bite the dust unless he can find a way to win.

After Noah Gragson was called out by his car owner for causing a crash last week, is his future at JR Motorsports in jeopardy?

Gallacher: Noah Gragson is a decent driver but way too aggressive. We have seen it in his entire career; Gragson is hot-headed and not afraid to turn someone for a win. I like Gragson, but I don’t see him as Cup-level talent. Will he replace Johnson at Hendrick Motorsports? Absolutely not. This Xfinity season is the weakest we have ever seen, with low car counts and less-talented drivers. Gragson has found a way to win, wrecking his teammate at Bristol Motor Speedway to get one. Gragson has been involved in 12 of 16 on-track incidents according to NBC’s broadcast, and Dale Earnhardt Jr. won’t put up with that for long; he knows talent, but he also doesn’t want to employ a wrecking ball that costs him money. Gragson needs to shape up, because he has half the field after him and Riley Herbst wants to take him out the next time he sees him. He won’t have a future if he keeps this up.

Cheek: At this point, yes. Just this year, Gragson’s had run-ins with Myatt Snider, Harrison Burton, Herbst, teammate Justin Allgaier and others, and the season’s only half over. Gragson was essentially reprimanded by team owner Earnhardt on the broadcast last week, and it left me (and many others, I’m sure) doing a double-take at home. At this point, Gragson seems to be on thin ice at JRM, and there’s certainly been a few drivers who have shown promise in 2019 and 2020 with the team that could be candidates to replace him – Ryan Truex, Jeb Burton and Daniel Hemric come to mind. Of course, Gragson has won races, so that puts JRM in a bit of a bind to choose, but his behavior could certainly send them over the edge.

Neff: Gragson is a winner and potential championship contender. He is young and very aggressive. Many drivers have made the same mistakes, but they weren’t winning races at the same time. His future isn’t in jeopardy at JRM. Gragson has to learn that he can be aggressive with 10 laps to go and running for a win, but he can’t be rubbing and moving people running for seventh on lap 10. His potential to win a title is in jeopardy if he keeps driving like a jackass, though. He’s going to have to spend more time looking over his shoulder than he is looking out the windshield. Brian Keselowski is right when he says that Gragson is going to piss off the wrong person at some point and he’ll have the lesson taught to him.

The Xfinity and Truck series races at Kansas Speedway will be held after Cup is finished racing. Should NASCAR occasionally make Cup races the opening event of a weekend?

Cheek: I don’t mind either way, but I prefer the dramatic lead-up to the Cup race to close out the weekend. I wouldn’t have a problem with Cup races occasionally being the opener, but again, it’s a buildup of anticipation; you’ve got the lower series races over the course of two or three days leading up to Sunday, and their action contributes to the Cup race becoming the peak of the weekend’s excitement.

Gillispie: Why should support races come after the main event they are supporting? That is like Garth Brooks opening for a concert headlined by Zach Gillispie, even if yours truly cannot sing to save his life. It doesn’t work. Case closed.

Neff: A NASCAR race weekend is like a symphony. They build and swell until they reach their climax in the grand finale. The finale of a NASCAR weekend should be the Cup race. Unfortunately, Xfinity shows have been the best races of late. Hopefully we’ll get the Cup cars back to the premier division they are, and the weekends can once again culminate with the best races seeing best drivers competing for 500 miles.

A lot of short tracks run the support series last because the fans are mostly there to see the prime race. At Jukasa (Cayuga) for the ISMA (winged Super Modifieds) they ran the Supers as the penultimate race. Fans don’t have to wait til Sunday for the Cup event and worry about the weather. But how many fans would be able to get to the track on a Thursday. It only works with no fans.