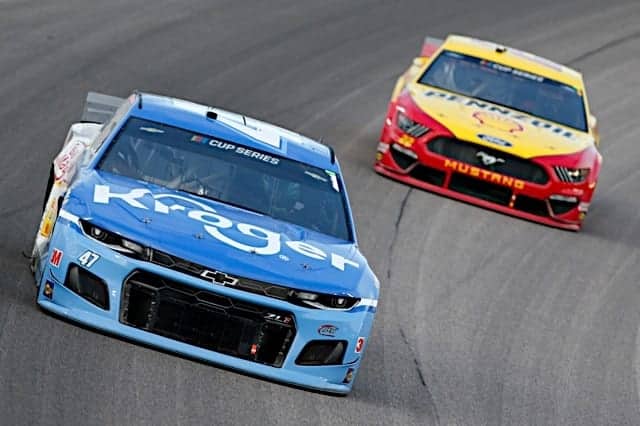 After Thursday’s (July 23) race at Kansas Speedway, the NASCAR Cup Series has officially crossed the halfway point of the season. Woof, with the way the season began, I wasn’t sure we’d ever get to this point.

All things considered, the same old, same old happened after 400 miles of racing; Denny Hamlin proved once again he’s in the midst of a career renaissance, while JTG Daugherty Racing finished last… again.

While Joe Gibbs Racing has had its ups and downs this season, Hamlin has been straight fire, earning his fifth triumph of the season. Who’d the No. 11 car pass for the win? His 2020 rival, Kevin Harvick.

Stats from tonight's Cup race at @kansasspeedway: @dennyhamlin scored his fifth victory of the 2020 season, marking the fourth time in his career he's had at least a handful of victories in a given season. #NASCAR

“I’m winning more with my mind now than I am with my talent,” Hamlin said post-race. “This was a well-executed race. We won today with probably not the best car.”

Surely, this season has a Hamlin-Harvick feel to it, as it did at points last season. Let’s not forget these drivers are probably the best in the series at Phoenix Raceway, too, which just so happens to be the track that hosts the championship race this season.

Since Hamlin has been paired up with crew chief Chris Gabehart, he’s won 11 of 51 races (yes, there have been 55 races since the beginning of 2019, but Gabehart was suspended for four events this season following the Coca-Cola 600). Cha-ching, that’s a win percentage of 21.6. Money.

The victory gives Hamlin 42 for his career, marching up the list of all-time winners, and two ahead of NASCAR Hall of Famer Mark Martin, who many people consider to be the best driver to have never won a Cup title. Junior Johnson, though never competing a full season, has 50 wins, no championships.

With all due respect to those two legends of the sport, Hamlin is the best driver to have never won a title. Mid-season prediction: he wins it this season.

OK, so when should everyone start taking Aric Almirola seriously?

Since June 14, there have been eight races on the Cup schedule, and Almirola has top-10 finishes in all of them, including a sixth-place run at Kansas. No, the No. 10 car hasn’t necessarily been a factor for a victory, though he did lead a career-high 128 laps at Kentucky Speedway two weeks ago, but he does have an average finish of 5.4 in those races. The old adage goes, the more time a driver spends inside the top five, the more likely it is they’ll score a victory.

Will Almirola win before the playoffs begin? Maybe. He’s very crafty on superspeedway tracks, and Daytona International Speedway is host of the regular-season finale. He’s also had good runs at Dover International Speedway in the past, which the Cup Series had a doubleheader weekend in late August. It wouldn’t surprise me to see the No. 10 car in victory lane because he’s shown the sheer speed to compete.

Since his fifth-place result at Homestead-Miami Speedway, Almirola has climbed five positions in the championship standings to eighth, comfortably inside the playoff grid (134 up on Tyler Reddick, who is the first driver on the outside looking in).

While Almirola has a good streak going, JTG Daugherty Racing does not.

Dating four races ago to the Brickyard 400, JTG has finished last in every single one of them. Yikes!

First off, both Ryan Preece and Ricky Stenhouse Jr. were involved in the Big One on pit road at Indianapolis Motor Speedway, with the No. 37 Chevrolet finishing last. The next weekend at Kentucky, Preece broke a transmission, again finishing shotgun. Last weekend at Texas Motor Speedway, he was involved in the melee on the frontstretch, running into the back of Cole Custer. No way he could go four-for-four, right?

Correct. However, Stenhouse had an electrical fire near his dashboard on lap 58, exiting the race early. Unfortunately for Stenhouse, BJ McLeod made it eight laps further before he retired from the race, giving JTG another 40th-place result.

We'll reset this weekend and be back stronger @NHMS! #NASCAR pic.twitter.com/ZTBD5oKbp0

How rare is it for a team to have back-to-back-to-back-to-back last-place finishes? Well, Prism Motorsports now extinct was the last team to do it in 2010, when Michael McDowell finished 43rd at Martinsville Speedway and Phoenix, while Dave Blaney was last at Texas and Talladega Superspeedway. The difference is Prism was a start-and-park team, while JTG has no shortage of sponsors.

It’s been a tough season for the Nos. 37 and 47 teams. Hell, even at Kansas Preece didn’t go unscathed, getting caught up in one of the most vicious incidents of the season. Through 19 races in 2020, the team has six last-place finishes, with a combined 12 DNFs in 38 starts.