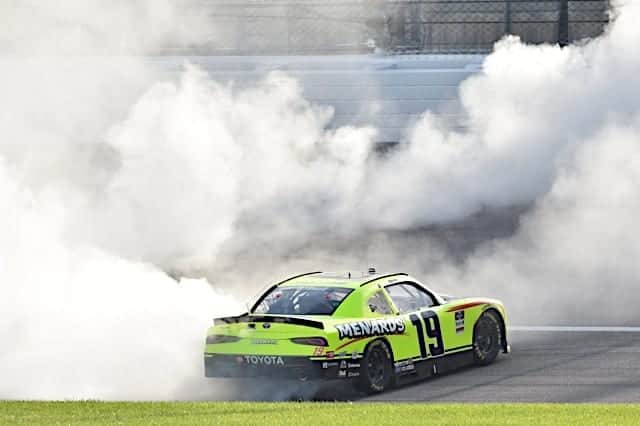 On an afternoon where it seemed like Austin Cindric had his fourth straight win locked down, Brandon Jones came out of nowhere on an overtime restart to score his third career NASCAR Xfinity Series win and second straight at Kansas Speedway.

Saturday’s Kansas Lottery 250 was the finale of a five-race stretch over three days. The NASCAR Cup Series kicked off the marathon on Thursday, followed by the Gander RV & Outdoors Truck Series and ARCA Menards Series on Friday. A second Truck Series event followed on Saturday afternoon, and the Xfinity Series capped off the weekend.

Jones raced in three of the five races, competing in both Truck Series events in Kyle Busch Motorsports’ No. 51 entry and finishing 14th and eighth, respectively.

Even before the race started, mechanical issues plagued a pair of drivers. Justin Haley suffered a radio malfunction, which held him on pit road for a brief time, while Myatt Snider‘s No. 93 was wheeled behind the wall before he was finally able to go out on track.

Jones led the first lap of competition for the Xfinity Series, perhaps a harbinger of what was to come – he surged ahead of polesitter Michael Annett to lead the first lap and the eight that followed, but Cindric quickly caught him and set sail.

Cindric led the next 117 laps, looking for a fourth straight victory. Pit cycles shuffled the field several times, but the No. 22 was a constant presence out front. Winning both the first and second stages, the winner of the last three races seemed poised to make it four.

With the final round of green-flag pit stops completed, Cindric maintained his lead but had Harrison Burton‘s No. 20 Toyota growing larger in his mirror. After battling with the No. 22 earlier in the race, Burton eventually caught up to Cindric and grabbed the lead when Cindric brushed the wall.

This time, it was Burton setting sail, seemingly en route to his third win of the season, but the caution flew for Joe Graf Jr. getting into the wall.

Ryan Sieg was the only driver who stayed out on the ensuing pit stop frenzy, the last driver to pit during the green-flag cycle. On the first overtime restart, he held serve against Cindric and Ross Chastain until the exit of turn 2. A caution reset the field to the last timing line, and Sieg kept the lead by virtue of that ruling.

Sieg and Cindric led the field back to the green flag, with Burton and Chastain also looking for the win in the rows behind them. Jones, meanwhile, restarted seventh.

Cindric grabbed the lead from Sieg, while Jones used momentum carried onto the backstretch to bypass several cars and get into the top five. By the time the white flag flew, Jones was right on Cindric’s bumper, pulling alongside and passing the No. 22 as the pair exited turn 2.

Jones pulled away and Cindric wasn’t able to get back to the No. 19, taking the checkered flag in second at Kansas Speedway.

Jones’ victory marks the third Xfinity triumph of his career and second of 2020, adding a Truck win at Pocono Raceway for good measure. His first career Xfinity win also came at Kansas in October of 2019.

“We’re never out of this thing,” Jones said in his post-race interview. “That’s what I love about these guys, we keep our head in the game, we don’t get excited during these races and [we] continued to make changes. My feedback I think was pretty good, all day obviously we got some stuff in the car to do it.”

“It’s been a long two days. … I feel exhausted,” he said. “Obviously the heat is big here, [but] looking forward to getting down and celebrating with these guys, it’s good to get back to victory lane.”

The NASCAR Xfinity Series will have a two-week break before their next race. Jones and the rest of the field will return at Road America on Saturday, Aug. 8, with the green flag scheduled for shortly after noon at the Wisconsin road course.

This xfinity win affirms that with a boatload of money most drivers will eventually win. Unless your name is Danica.
I guess Aaron Rodgers is a happy camper these days.

The do not pass until after the start line on restarts is totally unfair to drivers who are behind slow cars that are up in front, blocking the lane. The penalty should be on a case by case basis. If a driver loses 10 spots by the time he exits turn one he was in the way.