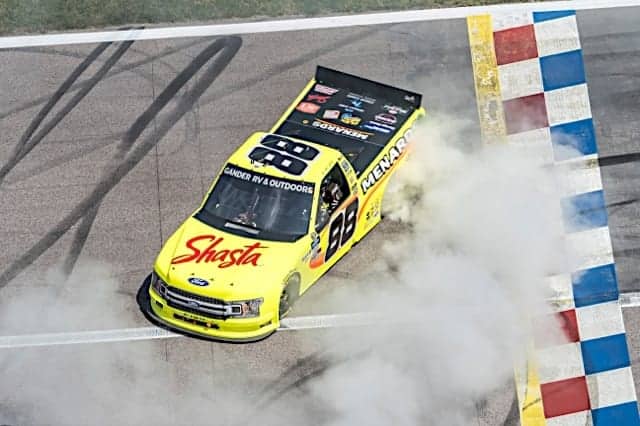 After a tight standoff between veteran and rookie, Matt Crafton snapped a three-year, 67-race winless streak to capture the E.P.T 200 at Kansas Speedway in the Gander RV & Outdoors Truck Series.

Saturday’s (July 25) contest was the second of two Truck races this weekend at Kansas, the first of which was held on Friday (July 24), with Austin Hill coming out victorious. Crafton finished fourth.

“Not a lot of give-up in these guys without a doubt,” Crafton said, commending his team for a strong run. “The (No.) 18 had a little bit of speed. He was making me nervous there.”

With less than 10 laps to go, rookie Christian Eckes, driver of the No. 18 Toyota put up a strong fight against Crafton. Seemingly, a majority of his runs on Crafton came in the entry of turns 1 and 3, but it wasn’t enough to close the deal. Eckes’ second-place finish marks his fifth top-10 finish in his 2020 season.

Eckes started third and quickly zoomed to the front of the field for the first seven laps before the lead was snatched away by Zane Smith, who dominated and scored the first and second stages in the race.

“Overall, what a comeback for our Safelight team,” said Eckes, who scored a 13th-place finish in Friday’s (July 24) race. “We still started the race a little off, but the track came back to us. … We’ll go back to the lab and get a little better I guess.”

Travis Pastrana, returning to NASCAR competition for the first time since 2017, started 24th and finished 22nd in the No. 40 Chevrolet for Niece Motorsports, two laps down after a lap 73 spin through the fronstretch grass.

There were seven cautions for on-track incidents, including a massive pile up on a lap 83 restart when Clay Greenfield was turned by Tanner Gray, collecting numerous drivers. Johnny Sauter, whose playoff hopes are on the line as he sits 12th in the standings, was caught in the melee, as were Ty Majeski, Stewart Friesen, Natalie Decker, Jennifer Jo Cobb, Spencer Davis and Codie Rohrbaugh.

On lap 94, teammates Brett Moffitt and Tyler Ankrum found themselves in the wall coming out of turn 4. Ankrum came up on teammate Smith, who clipped Ankrum and turned him into the wall, collecting the Moffitt’s No. 23 truck. Moffitt, the 2018 series champion, drove straight to the garage as Ankrum’s disabled vehicle was towed to the truck for an early exit.

“My nose just started ticking off. I don’t know what happened,” said Ankrum, who started 32nd. “Pretty embarrassing – demoralizing weekend, honestly. We’ve had a fast truck all weekend, our team just needs to catch a break.”

Crafton now locks himself into the Truck Series playoffs for the 2020 season. Competitors will move onto Michigan International Speedway, with a green flag time of 6 p.m. ET on FS1.